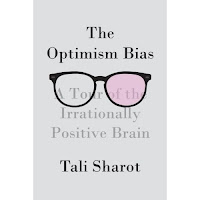 Yesterday I got the chance to meet the neuroscientist Tali Sharot and discuss her new book, The Optimism Bias, on Radio 3’s Night Waves. You can listen to the show here – it’s the last segment.

I enjoyed Tali’s book, and enjoyed meeting her, but I tried to express a polite scepticism about Tali’s thesis, which I characterised as:

2) This causes us lots of benefits – it means we live longer, are happier, are not crippled with angst at the prospect of death. Optimistic people are also more likely to achieve their goals. The bias also causes us some problems however – like the Credit Crunch or over-optimistic wars like Iraq.

3) Even if we wanted to take off these rose-tinted spectacles, we probably couldn’t. Because they’re neurally wired into our brains, we are destined to make the same mistakes, ‘every single time’

4) And this is a good thing, because if we saw the world as it actually was, we’d be clinically depressed

I put it to Tali that this was a very pessimistic view of human existence. She countered that I’d misread the book, and that actually the last chapter recognised the pitfalls of the optimism bias, which is why she suggests we need to recognise the bias and try to balance it out.

But I don’t think I did misread it. She hardly discusses ways to balance out the optimism bias at all, besides one sentence saying optimism is like red wine – one glass is good but downing the whole bottle is bad (a line she got from two other optimism experts, Manju Puri and David Robinson). Most of the rest of the book she argues that the optimism bias is ingrained in our brains, involuntary, automatic and unchangeable – and that it is good that this is so.

Throughout the book, she uses the deterministic, mechanistic, fatalistic language of neuroscience – she talks about our ‘seemingly automatic inclination to imagine a bright future’, argues optimism is ‘hard-wired’ into our brain, ‘it takes rational reasoning hostage’…’these defects are overpowering’…’No matter how hard we try, some mental and emotional processes are likely to remain hidden’, ‘you are still fooled. Every time. Every single time.’

Even when she explores how people find the ‘silver lining’ to catastrophic events like being paralysed, she says that this is a ‘trick’ the brain plays – as if learning to accept being paralysed is not a choice, or effort (in other words something voluntary, difficult, brave and noble) but rather an automatic and involuntary delusion. I think this is unfair to people who recover from trauma. Some people don’t recover from trauma. They kill themselves. Those who do recover have to really work hard to accept their situation. It’s not a ‘trick’ their brain plays on them. It’s a conscious, rational choice to see the facts of the situation, and accept them.

Tali insists in the book it’s good that our eyes are covered by automatic illusion blinders, because if we saw the world as it really was, we’d be clinically depressed and would die quicker. We need our illusions, she argues. She very briefly discusses the theory of ‘defensive pessimism’ – the idea that for some people, it’s adaptive and useful to think through what could go wrong, so that they can prepare for it. But just a few sentences later she insists ‘negative expectations can – literally – kill us’.

This is a startling claim. Get optimistic now or you will die! But her evidence for this very broad claim is just one study. It found that people who had a heart attack and were sure they were going to die, did indeed die before too long. Well, we can all agree that if you are very ill and are certain you are going to die very soon, it will negatively affect your chances of survival. But that isn’t pessimism – that’s outright fatalism. Some other forms of pessimism – or tempered expectations – might be adaptive in other circumstances.

Her shakiest claim is that optimism is good because it creates self-fulfilling prophecies that make things happen. She gives very little evidence for this claim, which is perilously close to the notorious ‘Law of Attraction’, other than one instance where the coach of the LA Lakers said they would win the championship two years in a row, and hey presto, they did. She says: “Believing that a goal is not only attainable but very likely leads people to act vigorously to achieve the desired outcome.”

Well, sometimes, but not always. Sometimes optimism means we don’t prepare properly – I’m reminded of Pompey the Great before battle with Caesar, who was so confident of victory he held a big banquet the day before the battle (which he lost). I’m also reminded of a 2003 study of maths qualifications among the students of 29 developed countries. It found that American students were the most confident in their maths abilities of the 29 countries, but nearly the worst in reality. Asian students were much less optimistic in their abilities, but actually much better than their complacent American rivals.

Sharot argues that positive expectations make us happier by ‘making us believe success is just around the corner’. Well, sometimes but not always. The Danes usually appear in happiness surveys as the happiest country in the world, and one researcher believes this is because of their low expectations – they expect each year to be worse than the last, and are pleasantly surprised when it’s not. In one eyebrow-raising passage, Tali suggests optimism developed at the evolutionary moment we became capable of imagining death, to protect us from this terrifying prospect through ‘false beliefs’. That is a damning account of the last 5,000 years of human culture. Yes, a lot of the time humans hide the fact of mortality from themselves – as TS Eliot put it, ‘humankind cannot bear very much reality’. But a great deal of the best art, literature, philosophy and religion is an attempt to confront the grim facts of life, including death. I don’t think you can sum all that up as consolatory ‘false beliefs’. Is Hamlet consoling? Yes – but not in a simplistic and delusive way. It tries to find a tragic wisdom born out of an acceptance of the brutal facts of life. Stoic philosophy, which we briefly discussed in the show, is also an attempt to accept and adapt to the hard facts of life. So is Buddhism.

So I think her book has a too pessimistic view of human reason, and our ability to overcome biases – including the optimism bias. CBT helps people overcome gambling addiction, for example, by getting them to keep track of their losses to see how over-optimistic they are being. I think she has too pessimistic a view of humans’ ability to face up to the grim facts of life, and fails to take account of the role of art and culture to balance out our inherent optimism (is this, perhaps, the adaptive social role of pessimists – and are a disproportionate number of pessimists writers, artists, historians and philosophers?)

Above all, I think her book bends the messy facts of life into too simplistic a narrative (a tendency psychologists call ‘the narrative fallacy’). She fits the complexity of human experience into the overly neat little categories so beloved of social scientists – on the one side, there are optimists, who are the heroes of her story, on the other, there are the pathological pessimists, who are clinically depressed and who need help.

Why should we accept these simplistic categories and divide humanity into two neatly separated tribes? Flesh-and-blood humans defy such easy categorisation. My father, for example, has an almost apocalyptic pessimism when it comes to Arsenal football club. He is absolutely sure they will lose, every match – and is pleasantly surprised if they don’t. But in other areas of his life, he is quite cheery. My brother, to take another example, is a climate change expert – he thinks the world is heading for an environmental armageddon. But in his personal life, he is also a cheery soul. I myself am optimistic about some things, and pessimistic about others. And my positions are not hard-wired into me – they change over time.

To misquote Walt Whitman, we are large, we contain multitudes. We should resist social scientists’ attempts to herd us into pens and label some of us good and some of us bad.