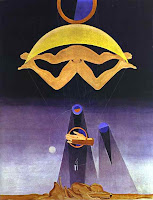 When he was a student at Yale University, Stephen Greenblatt wandered to the local bookstore to pick up some holiday reading, and his eye was caught by a strange-looking book with a painting by Max Ernst on the cover, showing disembodied torsos copulating in the sky. Naturally he bought it. It turned out to be a copy of Lucretius’ poem from the 1st century BC, On The Nature of Things.

Greenblatt tells me: “ The book came to me at a moment when I was intensely receptive to it. It’s an experience that most of us have – a book seems to speak to you directly across a vast chasm of time and culture. It was as if Lucretius was speaking to me.”

The poem is Lucretius’ attempt to put the philosophy of Epicureanism into verse. It’s envisaged as a form of therapy – honey lining the rim of a cup of medicine, as Lucretius puts it – that would spread Epicurus’ therapeutic ideas to a wider audience, revealing to them the atomistic nature of the universe, and freeing them from their deluded fear of death and eternal punishment. As self-help books go, it’s pretty weird, and at times discomforting – leading to accusations by St Jerome and other Christians that Lucretius went insane through love-sickness. But for many readers, the poem is still a moving and therapeutic read.

The young Greenblatt didn’t fear his own death, but he was instilled with a deep fear of his mother’s death, thanks to his mother, who possessed “an absolute certainty that she was destined for an early grave”. Greenblatt writes: “My life was full of extended, operatic scenes of farewell…even when I simply left the house for school, she clung to me tightly, speaking of her fragility and of the distinct possibility that I would never see her again.”

Mrs Greenblatt’s fears turned out to be unfounded – she lived until she was almost 90 – but Stephen was very struck by how the fear of death could make life unliveable. And this Lucretius knew and described well: “The poem crystallized things I’d been grappling with – the impatience that Lucretius gives voice to with excessive anxiety in the face of death. ‘Death is nothing to us’, he wrote. There’s a celebrated passage where he expresses quite powerfully how our endless complaints about death just get in the way of living:

Sometimes the phobia of death can grip a man so tight
He comes to loathe his very life and looking on the light,
And in his mournful heart resolves to die by his own hand,
Oblivious this fear’s the source of what he cannot stand.

In his new book, Swerve: How The World Became Modern, the Renaissance scholar examines the story of how Lucretius’ intensely modern poem was rediscovered in the 15th century by a Florentine book-hunter called Poggio Bracciolini, who brought it back to Florence and re-introduced its scandalous ideas into European culture, thereby helping (Greenblatt suggests) to create the modern world.

I spoke to Greenblatt to discuss Epicureanism, Lucretius’ vivid take on it, and its place in the modern world.

JE: Would you say you’re an Epicurean?

SG: Well, I’m not card-carrying. My card has expired. There are some aspects of it I don’t share. But if being an Epicurean or Lucretian means that I try to enhance pleasure and reduce pain, then yes. If it means that I don’t believe in a personal deity who intervenes in human affairs, or an afterlife where we’re rewarded or punished for our actions, then yes. I share Lucretius’ sense of hilarity at the belief that a deity cares about the outcome of the US election, or a sports match.

JE: What strikes me about the poem is how incredibly modern it is. In the last few years, we’ve had works by secular humanists like AC Grayling and Richard Dawkins that have tried to create a sort of secular poetry or myth to rival religious myths – but Lucretius already did that, 2,000 years ago.

SG: What’s also remarkable and moving is that this person who rigorously denies the efficacy of prayer begins his poem with the ‘Hymn to Venus’, which is one of the greatest prayers to a god ever written. Why? The answer has to be that he understood in a very deep way that humans have a natural longing for wonder and awe. And whatever the consequences of grasping an atomistic universe, it mustn’t be presented to the world as a deep disillusionment. A commitment to secular rationality doesn’t mean that the world is emptied out of wonder and ardour.

JE: The poem seems to me to put forward different views of nature. In the Hymn to Venus, nature is presented as a sort of festival of love, connecting and uniting all things. But in other parts of the poem, nature is scene as an atomistic clash or struggle between warring elements. And then the poem ends with this long and horrific description of a plague, which is like something by the Chapman brothers. Is there an ambivalence there?

Then beasts, the wild and tame alike, go romping over the lush
Pastureland and swim across the rivers’ headlong rush,
So eagerly does each pant after you, so do they heed,
Caught in the chains of love, and follow you wherever you lead.
All through the seas and mountains, torrents, leafy-roofed abodes
Of birds, and greening meadows, your delicious yearning goads
The breast of every creature, and you urge all things you find
Lustily to get new generations of their kind.

And then, at the end of the poem, there is this ghastly account of the plague. I think that Lucretius is looking at the worst that could happen, and attempting to think through it. He’s trying to show that the plague is not some divine punishment, but the outcome of ‘invisible agents’, as he refers to what we’d think of as pathogens.

JE: But it’s not very consolatory. You don’t find many long and graphic descriptions of a plague in self-help books.

SG: It’s not consolatory at all! That’s the hardest idea to grasp in some ways. There’s no reason in principle to think that existence is better in any sense than non-existence in Lucretius. In that sense, you could say his philosophy is Nietzschean. Now, I myself was brought up in a Jewish household that followed the Deuteronomic principle of ‘choose life’. So I’m not fully onboard with Lucretius’ vision of life. But I’d suggest it’s a consistent vision.

JE: Your book makes a juxtaposition, broadly, between the freewheeling and sexually liberal ethos of the ancient world, and the body-hating, ascetic and uptight Christian culture. But is it so black-and-white? Asceticism after all comes from a Greek word, askesis, which was central to Greek philosophy.

SG: Well, the juxtaposition is made grosso modo, so I’m not going to defend it belligerently. It could easily be disputed. But I would argue that, in the early Middle Ages, there was a quite sustained and very impressive collective attempt to reconceive the place of pain. It’s not that the ancients didn’t embrace pain – they had Stoicism in their culture, and the gladiator’s arena. But its quite significant that Christianity in the early Middle Ages erected a battered and bloody divinity at its centre.

SG: Lucretius is an interesting part of the conundrum. He was wary of sexual love because he understood deeply that certain ecstatic experiences of love are very close to pain [there’s a wonderful analysis of love-bites in Lucretius]. The flip-side of that, as we know of some ascetic practices in the Middle Ages, is that certain experiences of ecstatic pain are very close to pleasure.

[Greenblatt raises an interesting point here, which we didn’t have time to pursue. I wonder if Sado-Masochism, or the Marquis de Sade’s extreme philosophy of pain-pleasure, is a challenge for Epicureanism. Epicurus conceives pleasure as the absence of pain. But what if pleasure is actually mixed up with pain? Epicurus would obviously (and perhaps rightly) say that the Marquis de Sade is hardly a good model of ‘healthy pleasure’. And yet one doesn’t even have to get into S&M to argue the point: perhaps the greatest pleasures of human existence necessarily involve some pain: the ache of love for one’s children, or the music so beautiful it makes you cry. Perhaps Epicurus’ definition of pleasure as ‘the absence of pain’ is simply too dull to be either realistic or alluring.]

JE: Do you think Epicureanism is for the few or can it be for the many?

SG: That’s an interesting question. It’s not just flag-waving on my part that I end the book with Jefferson. Before him, Thomas More imagined a society founded on Epicurean principles in Utopia, but he clearly thought that the only way you can have an Epicurean society is if you insert the idea of punishment in the afterlife, because otherwise the people will behave too badly. It’s not until the Scottish Enlightenment, and Jeffersonian democracy, that the idea of a truly Epicurean society is put forward. The key moment is the Declaration of Independence, when Jefferson inserts that phrase about the ‘pursuit of happiness’.

JE: Do you think we live in an Epicurean society today?

SG: Of course not! But we could live in a more Epicurean society. That’s the hope.

JE: But how would you bring Epicureanism to a wider audience? Would that mean an expansion of the role of philosophy and the humanities?

SG: Well, I hadn’t thought of it in such self-serving terms! I’m not going to climb onboard that particular train. I think if anything we need more sciences as well as the humanities. We need people, including politicians, to come to terms with the implications of the world we live in. Have you read the Book of Mormon? Well…we better not go there.