This week, I interviewed the philosopher and scientist Massimo Pigliucci as part of my research into philosophy clubs and the Skeptic movement. Massimo is a fascinating figure: he grew up in Italy, then moved to the University of Tennessee to become a professor in ecology and evolution, before moving to City University of New York to become a professor in philosophy. He began outreach work in 1997, in Tennessee, when he heard that local politicians were campaigning to re-introduce creationism into schools – he campaigned instead to introduce ‘Darwin Day’ into local schools. This led to him being approached by a Skeptic group called ‘The Fellowship of Reason’, who asked him to join.

Massimo writes: “My first thought was that an outlet with that name must be run by cuckoos, and at any rate I had a lab to take care of and tenure to think about, thank you very much. But in fact it took only a couple more polite attempts on their part before I joined the group and, by proxy, the broader Community of Reason. It has been one of the most meaningful and exhilarating decisions of my life.” Massimo is an active member of the Skeptic community, writes a popular blog, and also runs a New York philosophy meetup with over 1000 members.

So what (I asked Massimo) is this ‘Community of Reason’?

It’s really three over-lapping communities: skeptics, atheists and humanists. There are some differences between them, but lots in common. They all, at least nominally, put reason at the forefront of what they’re doing.

Tell me about the three groups, their histories, and their differences. 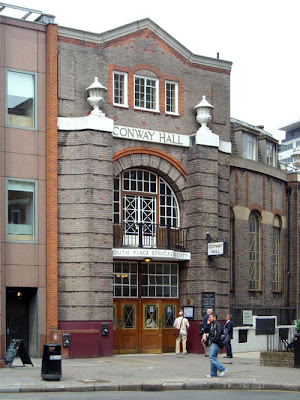 Conway Hall, home of British humanists, and Skeptics, and atheists...

Well, modern Skepticism appeared in the late 1970s, around the establishment of Skeptical Inquirer magazine. The Skeptics were originally interested in debunking some of the fluffy New Age thinking that flourished in the 1960s and 1970s. But it has significantly expanded its sphere of influence to apply Skeptic thinking to other areas like social science or politics or religion. Atheists think of themselves as a movement but all we have in common is a rejection of the supernatural. Atheists have a wide variety of views politically, from progressive to libertarian to Objectivist. Finally, secular Humanism starts from a secular perspective and takes it in a progressive political direction. Its humanitarian principles are found in the UN Declaration of Human Rights. It arguably emerged as a response to the horrors of World War I, and the failure of the League of Nations. You can trace its development back to the Fabians, and to figures like HG Wells and George Bernard Shaw.

Do these three groups really constitute a community?

My anecdotal experience is that there is a large overlap. You see a lot of the same people and the same speakers at Skeptic, atheist and humanist events. Atheists tend to be skeptical of the paranormal and so on. Most Skeptics are also atheists or at least agnostics, and are sympathetic to a rational and empirical view of the world. And secular humanists are by definition secular and explicitly endorse the application of science to the problems of the world.

What do Skeptic community members do together?

There’s involvement at different levels. There are more formal local and national groups, which might hold formal lectures or large conferences; and there are informal discussion groups, book clubs, Skeptics In the Pubs and so on. [Here’s a useful new document from a recent Skeptic forum about how Skeptics can get involved].

And the aim of these groups is mainly to learn?

Ben Goldacre at London Skeptics In the Pub

Learning is a part of it. But it’s more than just a science club. It’s also because people need social support. I meet a lot of people in the community who had troubled early experiences with religion, who felt alone, or weird, or ostracised in their local community. They’re looking for an alternative community, a place where they feel safe and accepted.

Is that why Skepticism is a more vibrant grassroots movement in the US than Europe, because Skeptics feel more marginalised in the US?

Yes I think so. I’ve been a member of Skeptic groups in New York and in Knoxville, Tennessee. My impression is places like Knoxville are where you find the stronger groups, with larger numbers, precisely because they feel under threat. I grew up in Italy, where I never heard of organised atheist groups, because in Rome, even with the Vatican nearby, religion is not a big issue.

In the UK it’s considered weirder to be religious than secular.

Yes, Skeptics in Norway told me it was more acceptable to say you were gay in Norway than religious.

Clearly the internet is a big part of the Skeptic movement’s vibrancy. Skeptic blogs, including your own, attract hundreds of comments.

Yes, you got a lot of comments on Skeptic blogs. Sometimes the comments are straightforward insults, people who feel like they can be jerks when their identity is hidden. I’ve written a blog for 10 years, and the blog is moderated to keep the tone of the discussion civil. What you see is that a lot of the commentators are very smart, and you develop a productive relationship with your readership over the years. And the comments section tends to be self-moderating – if someone says something silly, other people will correct them.

In general, the internet makes for a sense of community. It means that at any time of the day or night, you can log on and find someone to interact with. The negative side of that is communication is sometimes not as civil as it might be.

Would you characterise Skepticism as a philosophical movement?

Sam Harris: moral philosophy 'increases the boredom of the universe'

I think most members would say it was a scientific movement. There’s a lot of misunderstanding of philosophy within the community, in part thanks to the outright hostility towards philosophy expressed by some Skeptic figures like Lawrence Krauss. It’s sometimes a form of anti-intellectualism. Take Sam Harris’ recent book, The Moral Landscape, in which he tried to answer some moral questions. There was no discussion of previous moral philosophy in it. Harris said in a footnote that he wasn’t going to engage in philosophical discussion because it ‘increases the boredom of the universe’. Imagine if it was the other way round, and a philosopher said they weren’t going to engage with neuroscience because it ‘increased the boredom of the universe’.

You’re both a scientist and a philosopher. Is there a clear line between the two fields?

Philosophy is a broader exercise which informs science itself. Data are theory-dependent. That doesn’t mean anything goes. It means it’s not just a question of getting the facts. You also need to recognise there are issues of ideology and epistemology underlying theories. Of course, sometimes philosophers rub scientists the wrong way, and cause a particular scientific field some problems. Take the controversy about evolutionary psychology, where philosophers have challenged the credibility of the entire field.

The Skeptic movement has some prominent leaders or figureheads. And some of them engage in anti-intellectualism regarding certain areas of intellectual endeavour, particularly philosophy. Or they engage in unnecessarily harsh or offensive language. I don’t think it helps, that sort of incivility. And then there are some Skeptics who indulge in Skepticism to the point of being unreasonable – for example, they express Skepticism about human-caused climate change. I ask them, on what basis? Do you understand atmospheric physics? It’s a form of anti-intellectualism.

Is that sort of mindlessness the consequence of a growing community? What I mean is, when a community gets so big, its values can harden into unexamined dogmas.

Yes, perhaps it’s one price you pay for a larger and stronger community – some of the voices may not be as aware as others. The movement is growing in numbers, for sure. So there are some growing pains. And there are people who don’t know the history of the movement – young people come in, with a lot of enthusiasm, who aren’t aware of what we’ve been doing for the last 30 years. But it’s a still a vibrant conversation. A growing trend within the community, for example, is asking what sort of social issues the movement should address, beyond debunking New Age charlatans. The movement is also finally waking up to feminism. [Look at the new ‘Atheism Plus’ movement, for example. ]

So tell me about the New York philosophy meetup you run.

Massimo was awarded the movement's highest honour: his own 'Skeptic Top Trumps' card

I started it five or six years ago, when I moved to New York. I wanted a public outlet outside of academia. I contacted Rick Lewis of Philosophy Now magazine, because he had the idea of starting meetups all over the world. Basically people sign up to go to a dinner. Usually there are 15 to 20 places then a big waiting list. I pick a topic or other people suggest one. I usually put up a short article beforehand. Then we sit down, and have a symposium-style discussion for a couple of hours. Sometimes we organise larger events at larger venues – we did one on the science and philosophy of free will, which had around 500 people, who chose to give up their saturday afternoon in New York and pay for a ticket for an intellectual discussion.

The New York meetup has been incredibly successful. We have over 1000 members, and we’re not even the biggest philosophy club in New York. So the next time an academic colleague complains that they can’t talk about philosophy to the general public, I’ll take them to the meetup.

How good is academic philosophy at this sort of outreach?

On average, academic philosophy departments are pretty damn bad at outreach, which is unfortunate. When I talk to senior colleagues about the meetup, the look of indifference or contempt is pretty obvious. They think it’s a waste of time – any time producing a podcast or an event is time not spent on writing the next book or journal article which will be read by give people. But a good number of colleagues now have blogs or podcasts, or they’re happy to talk at public events. For example, we did an event at the New York Public Library on para-consistent logic, and a colleague of mine came to talk. It was packed. He was amazed. The younger generation, of course, is more aware of the internet and of popularising efforts like those pop culture and philosophy books. The older generation look at it and think ‘oh my gosh, you’re cheapening the field’. But that’s silly. They’re doing what scientists have done for years, which is improving the public understanding of the subject.

Thanks for the interview Massimo, and good luck with your work. He has a new collection of his blog posts out on Amazon Kindle, by the way, called Blogging As A Path to Self-Knowledge.