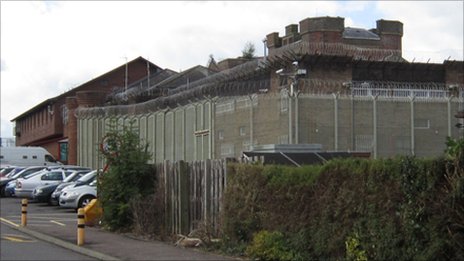 I’ll admit it, I was slightly nervous. I’d been invited to give a philosophy workshop in HMP Dumfries, a prison in west Scotland. Plummy-voiced and puny-framed Englishman that I am, I wasn’t sure what they’d make of me. Mincemeat, maybe. Anyway, I figured it was a low-security prison, otherwise they wouldn’t be inviting philosophers to give workshops, right?

Dumfries is a a squat concrete slab, circled with barbed wire and slits for windows. I was dropped off, buzzed in, and told to leave my bag, wallet, mobile and any valuables at the reception. Then the head of prison education came to meet me, he seemed a nice sort. I followed him through a locked door. And another. And another. He unlocked and then locked about ten doors in the space of 20 metres as we sank into the bowels of the building.

And then, abruptly, I was in a small room with some paintings and drawings on the walls. Inside were about ten men, all wearing orange and brown prison clothes. They were mainly white, English and Scottish, from their early 20s to 50s, with two youngish Pakistanis sitting together at the back, and a black guy with dreads on the right. I said hello, introduced myself, and they all did too. Then I launched into it, about how philosophy had helped me through depression, how it had inspired Albert Ellis to invent cognitive therapy, the Stoics’ idea that our emotions come from our beliefs or perspectives.

I asked, as I often do in these talks, for someone to suggest a moment recently that had upset them, so we could consider what beliefs or perspectives had led to the upset. Complete silence. Maybe it’s not something you admit publicly in prison – what gets to you. So one of the teachers jumped in and talked about how her brother wound her up.

Then I got onto the idea of focusing on what you can control rather than what you can’t. I told the story of Rhonda Cornum, how she had used Stoic techniques to cope with being a prisoner-of-war. ‘When you’re a prisoner, your guards control everything about your life, everything external anyway, except your thoughts and beliefs.’ That got their attention. Stoicism, after all, is very much a philosophy of finding inner freedom in external imprisonment – that’s why it’s inspired various inmates, from James Stockdale to Nelson Mandela.

By the end of the workshop, the front five people were sitting forward and engaged, and I’d got about half of the back row into it too, with two people apparently completely unphased by it all. It emerged that four of them had read my book, and they brought me copies to sign. The black guy told me he’d been about to begin a philosophy degree when he got arrested. He said to me, ‘I like what you’re doing, taking philosophy outside of academia’. I replied ‘if you can practice philosophy when life gives you a serious set-back, and you manage to cope, then you’re practicing at a much higher level than an academic writing in a journal’. I signed his book and wrote ‘Keep going’ in it. We all shook hands. I was genuinely moved that ancient philosophy seemed to resonate in here, perhaps even more than in academia. I thanked them all for their contribution. ‘Well’, said one old fella, ‘you had a captive audience’. The rest of the class groaned – clearly an old joke. They asked what philosophy book I’d recommend for the library. I thought about suggesting Gramsci’s Prison Notebooks, but decided on Boethius’ Consolations of Philosophy, written while he was on death-row for a false accusation of treason.

Afterwards, I met Nikki Cameron, a teacher in Low Moss prison, near Glasgow. She’s set up a philosophy club in the prison, and she says it’s been hugely popular – it’s running every week now, twice on Fridays, and they get ten or so people sitting round discussing everything from happiness to nothingness to the nature of evil.

Her boss at Motherwell College (which runs further education courses in western Scottish prisons) had given her a copy of my book, and she was excited about the possibility of developing a course on ‘living the good life’, which teaches some CBT self-management tips within more ethical and reflective context of philosophy. ‘Inmates are often conspiracy theorists, and they’re very wary of anything that sounds like a behaviour-change programme’, she says. ‘But philosophy piques their interest and gets them thinking and asking questions.’

Nikki didn’t know of any other philosophy clubs in British prisons. Nor did I, but apparently there is at least one – Alan Smith has been teaching a philosophy class in prisons for 12 years, and has actually just brought out a book about it, called Her Majesty’s Prisoners. The Reader Organisation has also run reading groups in prisons, similar to the Changing Lives Through Literature programme in Texas. There is also something called The Epictetus Club run by Jeff Traylor in the Ohio Penitentiary. I know AA Long has taught classes on Stoic philosophy in San Quentin prison too (in many ways, he’s the Johnny Cash of Hellenistic ethics).

I asked if the Alpha course ran in Dumfries and Low Moss. Carol, one of the teachers at Dumfries, said: ‘Religion is often quite divisive in Scottish prisons. The first question people get asked is, ‘which football club do you support?’, which really means, ‘are you Protestant or Catholic?’ And your answer will decide whether they think of you as one of them or as the enemy. ‘It’s incredibly tribal in here’, Nikki adds. ‘That’s why philosophy brings something new – it gets people thinking for themselves, not just governed by tribal loyalties.’

Religious prison-courses have one advantage, however, which is that they can perhaps offer a form of community to inmates when they go back outside. Carol says: ‘We see a lot of people re-offending in November, so they can be inside over Christmas. This used to surprise me, and I once said ‘what could be worse than being in prison over Christmas?’ An inmate said to me, quick as a flash, ‘there are a lot worse places to be over Christmas than prison, like sitting on your own in a bed-sit.’

For some people, it seems, prison is the closest thing they have to a caring community, and it can be a less chaotic, dangerous and lonely place than the outside world. Could philosophy provide community for them? Perhaps prisons could link up with recovery colleges and other community charities, so that inmates have somewhere to go, socialise, feel listened to, and feed their minds. Perhaps universities could also link up to such colleges, so that there is a steady stream of volunteers prepared to share their knowledge.

I also wondered if philosophy / CBT helps with the really deep stuff, of helping people cope with their guilt or their sense of being unlovable. ‘I think it can’, said Nikki. ‘CBT teaches us that guilt is a destructive habit of thinking.’ But is it always? What if you’ve done something really bad?

I asked what sort of a prison Dumfries is, assuming it was a low-security prison for short sentences. ‘No, it’s a high security prison’, I was told. ‘The class was basically made up of [people who had committed serious crimes, I’m not allowed to tell you what]. They’re people that couldn’t safely be allowed in with the other prisoners.’

This was quite a shock to me. I’d shaken all their hands, even written ‘keep going’ in the front of one of their copies of my book. They had done that? And they were all deeply in denial, keeping the memories of their crimes locked up in the back of their mind, just as the abused often bury their memories out of their consciousness. Could philosophy really help people to confront what they had done? Could it shift their psyches at such a profound level?

And why should we help people who’d done something so awful, so damaging to other people’s lives? It’s not an easy question. I think one can do it for various reasons. One can do it because it seems a bit racy, a philosophy class in prison, with violent criminals, wow! I imagine that wears thin fairly quickly. One can do it because you believe philosophy can change people, even people with deeply-ingrained habits of destructive behaviour. Maybe.

Or you can do it because you believe they have souls too, that it’s worth a shot, and sometimes God can speak to people even through layers and layers of denial, abuse, addiction and sin, and liberate them. Is that possible? Or just another self-serving delusion?

I’m completely new to the whole prison education thing, and I’m sure some of you have a lot more experience, so feel free to share your stories and ideas in the comments.