Naomi Tadmor is Professor of History at Lancaster University. She has researched and written about the histories of the family, religious life, language, and friendship in the early modern period. She is the author of Family and Friends in Eighteenth-Century England.  In this post for the History of Emotions blog, she explains the meaning of the term ‘friend’ in earlier periods, and the relationship between friendship and kinship.

A modern dictionary defines ‘friend’ as ‘one joined to another in intimacy and mutual benevolence’ independent of ‘family love’. For a person living in the sixteenth, seventeenth and eighteenth centuries, this would have sounded odd.

Certainly, people living at that time had personal friends from outside their family circles, as we do today; but their common use of ‘friend’ was to designate relatives through blood and marriage (retaining the ancient Germanic sense of the word). As well as that, ‘friend’ could refer to other close and senior people who mattered in one’s life, such as patrons, guardians, employers, and other supporters. The seventeenth-century diarist Ralph Josselin, for example, used ‘friend’ when referring to his sisters, brothers-in-law, uncles, and other relations. When the eighteenth-century shopkeeper Thomas Turner complained about his ‘friends’, he was thinking first and foremost about his mother and siblings, who lived in the neighbouring village and interfered in his life. When a young woman was asked for her hand in marriage, the most appropriate response for her would have been to seek the consent of ‘friends’: her parents (if either or both were alive), senior siblings, aunts and uncles, or any other kin who mattered, alongside guardians, masters, and mistresses.

Nor was this ‘friendship’ necessarily symmetrical. Today friendship is commonly associated with ideals of freedom, equality, and reciprocity. So was it depicted by classical philosophers. But in the hierarchical world of early modern England, friendship was frequently tied not only to kinship, but to patronage. Support, advice, protection, and material goods were sought and bestowed as ‘marks of friendship’. This was considered to be virtue. As the clergyman Jeremy Taylor said: ‘excellency and usefulness’ are the great ‘indearment’ of friendship. Edward Gibbon expressed this notion well when he explained that one of the main purposes of winning a seat in Parliament is ‘to employ the weight and consideration it gives in the service of one’s friends’. The instrumental and emotional aspects of friendship were very closely linked. 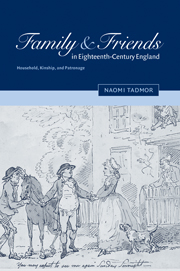 While family members and patrons could be ‘friends’, non-related people could count as ‘family’. The word ‘family’ was used in the early modern world to designate not only kin (dead and living), but entire household frameworks, which often included non-related persons such as servants, boarders, and lodgers. The shopkeeper Thomas Turner’s family contained at various times maidservants, shop-assistants, siblings, in-laws, nephews, as well as a wife and child. Turner considered these as his ‘family’ as they were under his roof and care. His mother, an independent householder, had a separate ‘family’ of her own. Even institutions such as schools and houses of corrections could be described as ‘families’, for they included dependants living together under the authority of a householder. Aptly, Samuel Johnson, in his dictionary, defined ‘family’ as ‘those who live in the same house’.

In the early modern world of sixteenth- to eighteenth-century England, these social structures made perfect sense. This was a society where many left home young to undertake service, education, or to learn a trade. Whereas the brokerage of marriages, trade, and support was negotiated along ‘friendship’ networks; work, care, and manufacture habitually took place within household-family frameworks. At the same time, mortality was high. Roughly one third of marriages ended prematurely, and many marriages were re-marriages, leading to complex half- and step relations and living arrangements. ‘Friend’ was in fact one of a number of kinship terms of the time that were usefully and intentionally opaque, concealing more than they revealed. The word disclosed only that the individual concerned had ‘friends’, and could be backed by allies. Their number, gender, and status remained unknown. The word ‘family’ – likewise inclusive and opaque – was also useful in a social world in which habitation and co-habitation were not necessarily tied to blood and marriage, and could be a matter of individual circumstances, preference, and choice.

Does any of this sound familiar?  We also have words that are inclusive and opaque, and can be applied to relatives and non-relatives within and beyond households. ‘Partner’, for example, historically described those linked by business or marriage, but is currently widely used ‘to refer to a member of a couple in a long-standing relationship of any kind’ (to quote the Oxford English Dictionary), thereby often intentionally giving equal kinship recognition to marriage, co-habitation, same-sex relationships, and so on, while obscuring the exact status and gender of the individuals concerned. Likewise definitions of ‘family’ have continued to evolve, as present-day ‘families of choice’ embrace not only an array of step- and half-relations but also persons with diverse gender alliances and with no formal ties of blood and marriage.

Taking a historical birds’ eye view, it is clear that times are very different for individuals, families, and households – our predecessors had lower life-expectancies, while practices of partnership and divorce, and social hierarchies, have greatly changed since Tudor, Stuart, and Hanoverian times. Still, some patterns seem suggestively similar. Social structures typical of early modern notions of ‘friendship’ and ‘family’ might bring to mind present-day ‘new families’ and ‘families of choice’. What is more, both the present-day and the historical patterns show how language is continually adapted to negotiate changing forms of alliance and relatedness.

Naomi Tadmor has written about families and friends in: