This is a guest post by Stacy Hackner. Stacy 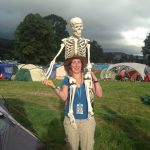 is a PhD researcher in bioarchaeology at UCL, investigating the influence of activity on bone shape in ancient Sudan. She also works as a student engager for UCL Museums, focusing on bringing public engagement and interactive learning into unexpected spaces.

The history of archaeology in the late 19th and early 20th centuries can be read as the history of European men attempting to prove their perceived place in the world. At the time, western Europe had colonized much of the world, dividing up Africa, South America, and Oceania from which they could extract resources to further fund empires. Alongside this global spread was a sincere belief in the superiority of the rule of white men, which had grown from the Darwinian theory of evolution and the subsequent ideas of eugenics advanced by Darwin’s cousin Francis Galton: not only were white men the height of evolutionary and cultural progress, they were the epitome of thousands of years of cultural development which was superior to any other world culture. According to their belief, it was inevitable that Europeans should colonize the rest of the world. This was not only the normal way of life, but the only one that made sense.

In modern archaeology, we let the data speak for itself, trying not to impose our own ideas of normality and society onto ancient cultures. One hundred years ago, however, archaeology was used as a tool to prove European superiority and cultural manifest and without the benefit of radiocarbon dating (invented in the 1940s) to identify which culture developed at what time, Victorian and Edwardian archaeologists were free to stratify ancient cultures in a way that supported their framework that most European=most advanced. “European-ness” was defined through craniometry, or the measurement and appearance of skulls, and similar measurements of the limbs. Normality was defined as the average British measurement, and any deviation from this normal immediately identified that individual as part of a lesser race (a term which modern anthropologists find highly problematic, as so much of what was previously called “race” is culture).

In my research into sites in Egypt and Sudan, I’ve encountered two sites that typify this shoehorning of archaeology to fit a Victorian ideal of European superiority. The first is an ancient Egyptian site called Naqada, excavated by Sir William Matthew Flinders Petrie in the 1890s. Petrie is considered the founder of modern, methodological archaeology because he invented typology – categorizing objects based on their similarity to each other. As an associate and friend of Galton and others in the eugenics circle, he applied the same principle to categorizing people (it’s likely that his excavations of human remains were requested by Galton to diversify his anthropometric collection). Naqada featured two main types of burials: one where the deceased were laid on their backs (supine) and one where the deceased were curled up on their side (flexed). Petrie called these “Egyptian” and “foreign” types, respectively. The grave goods (hand-made pottery, hairpins, fish-shaped slate palettes) found in the foreign tombs did not resemble any from his previous Egyptian excavations. The skeletons were so markedly different from the Egyptians – round, high skulls of the “Algerian” type, and tall and rugged – that he called them the “New Race”. Similarities, such as the burnt animal offerings found in the New Race tombs, present in Egyptian tombs as symbolic wall paintings, were obviously naïve imitations made by the immigrants. However, the progression of New Race pottery styles pointed to a lengthy stay in Egypt, which confused Petrie. Any protracted stay among the Egyptians must surely have led to trade: why then was there an absence of Egyptian trade goods? His conclusion was that the New Race were invading cannibals from a hot climate who had completely obliterated the local, peaceful Egyptian community between the Old and Middle Kingdoms.

Of course, with the advent of radiocarbon dating and a more discerning approach to cultural change, we now know that Petrie had it backwards. The New Race are actually a pre-Dynastic Egyptian culture (4800-3100 BC), who created permanent urban agricultural settlements after presumably thousands of years of being semi-nomadic alongside smaller agricultural centres. Petrie’s accusation of cannibalism is derived from remarks from Juvenal, a Roman poet writing centuries later. It also shows Petrie’s racism – of course these people from a “hot climate” erased the peaceful Egyptians, whose skulls bear more resemblance to Europeans. In actuality, Egyptian culture as we know it, with pyramids and chariots and mummification, developed from pre-Dynastic culture through very uninteresting centuries-long cultural change. Petrie’s own beliefs about the superiority of Europeans, typified by the Egyptians, allowed him to create a scientific-sounding argument that associated Africans with warlike-invasion halting cultural progression. 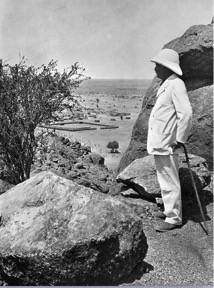 The second site in my research is Jebel Moya, located in Sudan, south of Khartoum, and excavated by Sir Henry Wellcome from 1911-1914. The site is a cemetery that appears to be of a nomadic group; dating to the Meroitic period (3rd century BC-4th century AD). The site lacks the pottery indicative of the predominant Meroitic culture, therefore the skulls were used to determine racial affiliation. Meroe was seen as part of the lineage of ancient Egypt – despite being Sudanese, the Meroitic people adopted pyramid-building and other cultural markers inspired by the now-defunct Egyptian civilization. Because many more female skeletons were discovered at this site than male, one early hypothesis was that Jebel Moya was a pagan and “predatory” group that absorbed women from southern Sudanese tribes either by marriage or slavery and that, as Petrie put it, it was “not a source from which anything sprang, whether culture or tribes or customs”. Yet, the skulls don’t show evidence of interbreeding, implying that they weren’t importing women, and later studies showed that many of the supposed female skeletons were actually those of young males. This is another instance of British anthropologists drawing conclusions about the ancient world using their framework of the British normal. If the Jebel Moyans weren’t associating themselves with the majority Egyptianized culture, they must be pagan (never mind that the Egyptians were pagan too!), polygamous, and lacking in any kind of transferrable culture; in addition, they must have come from the south – that is, Africa.

These sites were prominent excavations at the time, and the skeletons went on to be used in a number of arguments about race and relatedness. We now know – as the Victorian researchers reluctantly admitted – that ruggedness of the limbs is due to activity, and that a better way to examine relatedness is by examining teeth rather than skulls. However, the idea of Europeans as superior, following millennia of culture that sprung from the Egyptians and continued by the Greeks and Romans, was read into every archaeological discovery, bolstering the argument that European superiority was normal. Despite our focus on the scientific method and attempting to keep our beliefs out of our research, I wonder what future archaeologists will find problematic about current archaeology.