I’m travelling through India for three months. While out here, I’m doing some work exploring emotional health in India, and some of the fascinating intersections that take place between the UK and India in health – from western tourists travelling here for cheap operations or ‘yoga holidays’, to Indian doctors travelling to the UK to work (25,000 Indian doctors practice in the UK, helping to make India the largest exporter of doctors in the world).

I’m five weeks into my trip, and finding it exhilarating.  I particularly like the relaxed spiritual pluralism here. In the UK, secular materialism is very much the dominant metaphysics, and if you start talking about ‘spirit’ or ‘soul’ or even ‘God’ you immediately feel you’re on the lunatic fringe of things. I have a book coming out in May on ecstatic experiences, and I’m somewhat dreading the publicity tour, because such matters feel so off-the-beaten-track in British culture.

By contrast, in India, spirituality is more mainstream. That’s not to say India is one big ashram – it’s also an incredibly materialist, scientific, status-obsessed place. But the spiritual coexists with the material here on more equal terms. For example, I attended the Jaipur Literature Festival, India’s equivalent of Hay, where there were the usual novelists, historians and pundits, but also gurus like Sadhguru, a motorbike-driving yogi, who talked about his own ecstatic experiences like it was the most normal thing in the world. Someone like him wouldn’t get on the programme at Hay, or onto Radio 4. He wouldn’t be considered sufficiently intellectual. 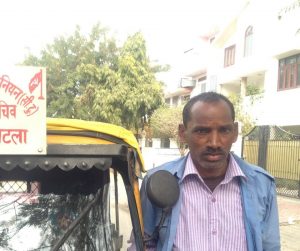 We’re suspicious of the spiritual and religious in the UK because we don’t want anyone forcing their beliefs onto us. And we like clarity in our beliefs – either you’re an evangelical, or you’re a skeptical materialist. In Indian culture, it appears to be less either / or, and more both / and. Take Ram, a rickshaw driver who ferried me around Jaipur. Ram worships Ganesh on Tuesdays, Hanuman on Wednesdays, and goes to Catholic church once a month. He’s also head of the communist rickshaw union. ‘God is one, but takes many forms’, he told me.

One finds a similar sort of relaxed pluralism in Indian health. At the Jaipur Festival, I met Aarathi Prasad, a scientist at UCL and the author of In The Bonesetter’s Waiting Room: Travels Through Indian Medicine. She spoke of India’s unique health system, in which there are seven officially-recognized types of healthcare – western, Ayurvedic, Yoga, Siddha, Homeopathy, Naturopathy, and Unani (the last originated in ancient Greece).

In her travels, Prasad saw modern, educated Indians happily mixing their health approaches – they might go to a biomedical doctor, and / or to a Sufi shrine, and / or a Christian exorcist, and / or a Ayurvedic healer. Whatever works.

I’ve seen a similar pluralism from Western tourists coming to India for ‘spiritual tourism’. In Goa, I stayed at a yoga retreat where young Western women trained in yoga and Ayurvedic medicine, solemnly learning the Sanskrit terms for various asanas, and practicing arcane purging techniques like pouring salt-water up their nose.

There are all kinds of weird contradictions or absurdities in this, as was pointed out by a group of educated young Indians sitting in a nearby beach-bar sipping Pina Coladas at 11am. ‘Why come all the way to India to learn yoga from a Westerner?’ asked one. They were also bemused by Western spiritual tourism to India, and the naïve exoticist projections we bring. They, by contrast, admire the secular urban sexually-liberated culture of London (two of them are about to move there). One of them pointed at a sign outside the yoga centre, which said ‘cleanse your soul here’. ‘I like my soul dirty’, she said, sipping her cocktail.

Another of the paradoxes of western spiritual tourism to India is that we often come with a solemn sense of the ancient spiritual practices we are learning, when in fact a lot of it is a recent invention. At Jaipur Festival, I met James Mallinson and Mark Singleton, two academics based in London who recently published The Roots of Yoga, one of the first serious studies of the history of yoga. They’ve found that most of the modern postures we know – the sun salute, the downward dog, the warrior and so on – evolved around a century ago, partly in response to foreign practices like Swedish gymnastics. Ancient Indian yoga was much more focused on breath-training,  mind-training, and the channeling of semen.

But so what? Just because modern yoga is not two millennia-old, doesn’t mean it’s not worth doing. ‘I still do the sun salute every morning, even though I know it’s a recent invention’, Mallinson told me. ‘It still feels good.’ He’s also relaxed about the multiple goals people bring to modern yoga, from spiritual liberation to stress relief to a sexy bum. ‘There’s an ancient text which says it doesn’t matter if you’re a Brahman or Buddhist or Jain or even atheist, if you practice yoga assiduously it will bring success. Of course, what ‘success’ means is another question.’

Yet one of the risks of Western spiritual tourism to India is that, in our enthusiasm, we throw out any critical skepticism and embrace all kinds of nonsense, some of which may be harmful. At my yoga holiday, we were all encouraged to do shoulder stands, even though this posture can often lead to serious injuries and shouldn’t be practiced without supervision.

We can also ignore the misogyny and class hierarchy of some Indian religion. I went to a Tantric course, which was mainly filled with Chinese housewives joyfully journeying to India for a sexual holiday (the neo-Tantra of Osho is apparently catching on among affluent Chinese). The Westerners there swallowed the New Age Tantra completely – one of them even had the seven chakras tattoed on his back. ‘Men are rational and discriminative, women are irrational and passionate’, we were taught by the course leader, a Russian. When I suggested this was misogynist nonsense invented by male priests, he replied ‘No! This is ancient wisdom!’

We can end up credulous spiritual consumers. I found myself visiting a psychic guru in Jaipur, who also runs a jewel shop. ‘You are 38’, he told me confidently. I’m 39. ‘You have three siblings.’ I have one brother. ‘You work as an independent creative…you’re a coach, you write beautiful philosophy.’ Hey, one out of three ain’t bad! He advised me that my heart chakra was blocked because I worry too much about rejection, and suggested I purchase an emerald pendant to unblock it. I’m wearing it now, fairly confident it’s glass.

I wonder what Indian health can learn from the UK, and vice versa. From the UK, Indian health could learn to be more evidence-based. Yoga and meditation emerged from India, yet almost all the recent evidence-based trials of it have taken place in the West, mainly in the US. There is room for a richer dialogue between spiritual practices and evidence-based trials. Indeed, I visited a GP in Chennai who runs a company called Mediyoga. He sent me round the corner for an MRI (private medicine is remarkably quick and cheap in India) and then diagnosed me as suffering from chronic degeneration of a back disc. He prescribed a few basic yoga postures to help me. I welcome this sort of combination of the biomedical and the ‘alternative’.

India could also learn from Western public health, particularly mental health services. The reason alternative health is so huge in India is there is very little state-funded health – India only spends around 1% of its GDP on health. For a country obsessed with well-being, there is a remarkable lack of psychiatrists and therapists. Mental illness is still a taboo. I am sure the Indian government could benefit from links to the NHS’ Improving Access for Psychological Therapies programme, particularly with advice on therapy and counseling apps, which would be the easiest way to roll out mental health services in India. My next stop is a conference on Indian public health in Goa, organized by UCL.

From the other side, the UK could learn a lot from India about how to integrate mental health and physical health. Biomedicine has often left out the mind (never mind the soul), and we’re only just learning how connected mental and physical health are. Mental treatments like meditation and Cognitive Behavioural Therapy are beginning to be used in the NHS not just for emotional disorders but also for physical complaints, to help with the mental side of recovery.  We could also learn from India the power of cultural contexts for health – the power of ritual, of music, of festivals, of prayer, of pilgrimages. We could learn the healing power of non-rational states of consciousness, like trance, absorption and ecstasy (even as I write this, I feel how far away this is from British public health!)

Medical humanities, finally, is still very much a nascent field in India, although a journal dedicated to it launched three years ago. I would suggest the field has a lot of potential, as a meeting place where we can engage in dialogue about the pluralism of Indian health – the history, the culture, the arts, the spirituality, and the encounters with foreign consumers and foreign markets in the globalization of health and well-being. There’s a lot to be explored.