Reviewed by Javier Moscoso, Research Professor of the History and Philosophy of Science at the Spanish National Research Council in Madrid. He is the author of Pain: A Cultural History (2012).

After the publication of pioneering works by Elaine Scarry and David B. Morris, it was only a matter of time before the history of pain – in the whole rich complexity of its cultural meanings – began to flourish as a field.

In the last ten years or so, the number of papers, conferences, and monographs dealing with different forms of physical suffering or psychological distress has expanded rapidly. Far from being limited to the history of medical remedies or physiological theories,  the cultural history of pain has become one of the most polyphonic areas of historiographical inquiry, with contributions that cover such disparate areas as the history of tears and sadness, pain in animals and infants, the emotional communities of medieval sufferers, rituals of sexual and cultural masochism, the experience of cancer patients, and the development of analgesic medicines.

The history of the body, but also the new history of the emotions, has begun to trace the cultural differences and historical varieties within what had often been considered a universal experience. Even from a purely medical point of view, we may wonder at the enormous variety of experiences that fall under the same word. After all, what we call “pain” involves a tremendous variety of different realities, from causalgia to fibromyalgia and from grief and mourning to physical and psychological trauma.

Given the proliferation of perspectives, we can only celebrate the publication of this small book that comes to shed some light and impose some order upon such a vast field of inquiry. Its author, Rob Boddice, a leading historian of emotions, has published extensively on the history of sympathy, animal suffering, pain and emotions. He is also the author of a new handbook on the history of the emotions published by Manchester University Press [which will be reviewed on this blog later in the year – Ed.] 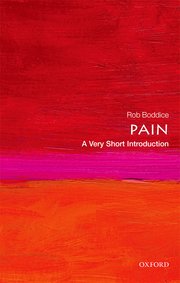 Pain, A Very Short Introduction, explores the phenomenon of pain (the event of pain, as Joanna Bourke nicely called it in her The Story of Pain. From Prayers to Painkillers) from a triple point of view. First, it gives a critical account of contemporary theories and definitions of pain. Second, it covers what pain has been historically, how it has been conceptualized, experienced, expressed or ignored, not just from a clinical or medical point of view, but also from a more cultural perspective. Finally, Boddice also discusses the way in which all understanding of pain and suffering requires a political standpoint from which to explore and assess the pain of others.

This last point, fully developed by the work of Keith Wailoo in his Pain: A Political History, can of course also be applied to the author of the book under review.  After all, Boddice could have chosen other examples or referred to some other experiences. He could have put more emphasis on non-western sources or explored in more detail some other non-English cultural milieus. This is indeed one interesting feature in Rob Boddice’s book: his attempt to introduce some global variations and reflections on non-Western cultures of pain and suffering.

The book is divided into nine chapters that go from concepts to cultures or from pain mechanisms to masochism. Written with dexterity, concision and clarity, it also includes an updated bibliography. In brief, this is a very impressive short book about a polymorphous and highly elusive subject that combines first hand research, useful summaries of current debates, and explorations for future inquiries.