Rhodri Hayward is Reader in the History of Medicine at Queen Mary University of London and a founder member of the Centre for the History of the Emotions. His current research into tidying up, time management, and emotional health is part of the Wellcome-funded Living With Feeling project. In this post for the History of Emotions blog, Rhodri writes about the work of one of his artistic collaborators on that project.

Over the last two years, the artist Nye Thompson, in concert with an array of internet bots, has begun to assemble an archive of our anxieties.  Working through unsecured networks, the bots harvest images from surveillance cameras and webcams, cataloging the domestic interiors and empty office spaces that have become the objects of our anxiety. The effect is curiously unsettling.

Unlike the fears of continuous surveillance that animated civil liberties campaigns in the 1980s and 1990s – and which generated a host of academic papers addressing the power of ‘panopticism’ – these images reveal something bleaker and more disturbing.  They demonstrate the persistence of our watchful gaze over spaces vacated or abandoned.  ‘Eerie’ is perhaps the right word.  As the critic, Mark Fisher, wrote “The eerie is constituted by a failure of absence or by a failure of presence. There is something where there should be nothing, or there is nothing where there should be something.”  Our worries over empty homes and property, which we seek to allay through surveillance,  generate, in turn, their own unsettling impressions. 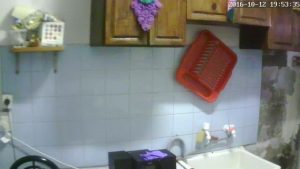 There have of course been many attempts to create catalogues of emotion or archives of feeling.  Darwin’s Expression of the Emotions in Man and Animals (1872) mixed photographs, home experiments and literary reports from far flung correspondents to create a survey of the forms of feeling grounded in evolutionary history.  Similarly, Paul Ekman and Wallace Friesen, working through the 1960s and 1970s, curated portraits of emotional expressions from New Guinea, Borneo, Brazil, the US, Chile, Argentina and Japan. The collection was used to ground the claim that there are six basic emotions that can be recognised across all human cultures.  Ekman and Friesen’s argument was inspired, in part, by Darwin’s evolutionary theories and, in part, by the ideas of the neuropsychologist, Silvan Tomkins: Tomkins claimed that emotions should be seen as affect programmes – codes for facial, bodily and mental performances –  scripted in prehistory and hard-wired into our brains.

Although Nye Thompson’s archive of surveillance images seems quite distant from the work of Darwin and Ekman, it intersects with them in curious ways.  As Thompson’s most recent work with her software bot (‘The Seeker’) demonstrates, there is a symmetry between the ways that Ekman and Tomkins imagine our interior lives and the inner operations of the technologies we have invented to watch over them.  Although many security cameras simply operate through continuous open-ended recording, intelligent systems have a series of algorithms built into them in order to identify and capture instances of threat.

Thus a captured image, like the one shown below, of an Old English Shepherd dog heading down a garden path, triggers a series of ‘guesses’ in the machine:  ‘Airfield, Airship, Airport, Warplane, Battleship’.  The home security camera, like Tomkins and Ekman’s imagined human, reads the landscape through a specific script.  The camera’s script however, was written not in the prehistoric past but in the Cold War programmes of drone surveillance — and it carries within its circuitry the neurotic concerns of the military/industrial complex. 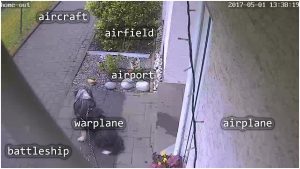 Perhaps then, the eeriness of Thompson’s images stems from the fact that they reveal the persistence of a kind of emotional life in a world emptied of people. This would be a challenge for any historian of emotions. Or perhaps, the eeriness arises from the way that this work shows just how closely our most intimate emotions are bound together with the fabric of material life.

The camera, like the charms once used in protective magic, works to reassure us when we worry about vulnerable homes or possessions.  And much like talismans such as the ‘evil eye’ drawn to protect buildings, the camera works by instilling anxiety in the minds of potential wrongdoers. It thus helps to set and sustain feelings that pass between people and objects, the present and the past. It is this intimacy between the material and the psychological, between things and feelings, that accounts for the eeriness of Thompson’s archive of emotion. The images remind us that whatever we might do to safeguard our possessions, our feelings aren’t entirely our own.