Psychosis. Scary word isn’t it? These days we think nothing less of a person if they publicly disclose they get depression, or anxiety. We applaud them for being brave, but they’re not really risking anything. But admit you get psychotic episodes…that you hear voices…that you see things others don’t see? Maybe some of us start to edge away.

Psychosis is the ultimate bogey-man for our rationalist-materialist culture. It is the sleep of reason, a land of monsters, with absolutely nothing positive about it. It’s a biological flaw, which you need to suppress with medication and try to go on with your life.

But other cultures in India, Africa, Asia or Latin America have other ways of framing such experiences, which suggest they’re not negative or positive, just something that happens to some humans along their path of development, which can be integrated positively into their lives and societies. This may be why outcomes for people with schizophrenia are worse in western cultures than in other cultures (or it may be because in developing countries anti-psychotic drugs are used more selectively, leading to better outcomes for people).

In western culture, some psychologists – RD Laing, Stanislaf Grof, and more recently the Hearing Voices Network – have demanded a re-evaluation of such experiences, so that we take the content and meaning of people’s thoughts, visions or voices seriously, and help people come to terms with them. Grof,in particular, introduced the idea that some psychotic episodes are not symptoms of brain disorders but spiritual emergencies – messy and frightening moments of radical shift in ego structure, which can be moments of spiritual awakening and growth if handled sympathetically. 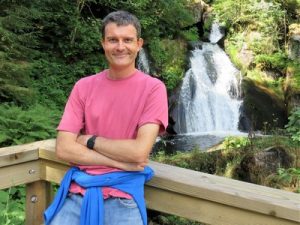 Last week, I got to interview Anthony Fidler, a British teacher of Zen meditation and tai chi, about his experience of using mindfulness and connection practices to navigate through occasional episodes of psychosis / highly altered states of consciousness. You can listen to our interview on our podcast, on the Soundcloud link below or on iTunes.

I met Anthony in India in 2017, at a Zen retreat he was helping to run. I was struck by how cool and collected he seemed to be – I thought he might be a military man. I thought to myself ‘that’s how I’d like to be after years of practice’. After the retreat, we got talking, and I discovered his life story was very different from what I imagined. He was a soldier, but of a different kind. In fact, Anthony has over the last 18 years experienced occasional episodes of what western psychiatry would call psychosis – visions, voices, highly altered sense of self, time and external reality. He was initially referred to a psychiatrist for this and put on risperidone, an anti-psychotic drug, but – as he tells me in the interview – the psychiatrist showed no interest in him as a person, and the drugs made him feel far worse. Eventually, he learned to manage his intrusive dark thoughts with mindfulness, and to learn to exist in very altered states, while staying present, calm and compassionate.

He offers us a different way to cope with psychosis (if we want to use that rather loaded word, which immediately seems to bracket off this realm of experience as something deeply abnormal and terrifying). To have a psychotic episode in western culture is to be deemed a f*ck-up, possibly someone with a genetic biological condition requiring lifelong medication. But what if these states of consciousness are natural? What if these experiences can be stages of healing and growth, albeit rather messy? What if our cultural attitude to them is precisely what makes them so harmful and life-ruining?

My best friend had a psychotic episode when he was 16, and has been on medication ever since. 25 years later, he can barely conduct a conversation. NHS psychiatrists wanted to help him, but they may have actively ruined his life by insisting he take medication which is obviously not working. Other loved ones have experienced psychosis and been too afraid to seek treatment, because of our society’s phobic attitude to this realm. I myself had a two-week episode of what psychiatrists would call psychosis, following a nine-day ayahuasca retreat in October. For two weeks, I felt like I was in a different reality, and wasn’t sure if I was in a dream. But I managed to come out of that experience, and even feel like I’d grown and healed through it, thanks to the love and support of my friends, and thanks to some basic spiritual tools I’d learned over the past few years, particularly self-acceptance and focus.

We have made an enemy of aspects of our own mind. It’s our mind, our home, we need to learn to live in it peacefully, and to make friends with the wilder beasts that roam there. There are dragons within us, but with care and education we can learn to ride the dragons.

To find out more about Anthony’s work go here.