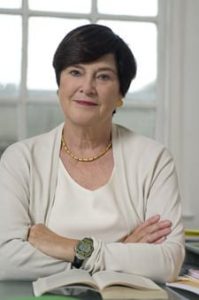 Ruth Leys is Henry Wiesenfeld Professor Emerita of the Humanities (Johns Hopkins University). Her pathbreaking research has critically interrogated the history of the modern concept of psychic trauma (Trauma: A Genealogy, 2000); examined the post-World War II vicissitudes of the concept of ‘survivor guilt’ and its displacement by notions of shame (From Guilt to Shame: Auschwitz and After, 2007); and traced the history of experimental and theoretical approaches to the study of the emotions (Ascent of Affect: Genealogy and Critique, 2017).

In this interview for The History of Emotions blog, she talks to Professor Jan Plamper (Goldsmiths) about her latest publication, Newborn Imitation: The Stakes of a Controversy (CUP, 2020). Part of the Elements in Histories of Emotions and the Senses, Newborn Imitation is available as a free download until the 21st July.

Jan Plamper: What was the hypothesis of newborn imitation, first put forward by Meltzoff and Moore in 1977?

Ruth Leys: The hypothesis was that babies can imitate certain facial and other movements at birth. According to Meltzoff and Moore, newborns are able to imitate what are called “opaque” movements: If an adult sticks out her tongue, the baby can see the adult’s tongue moving but can’t feel it for herself; similarly, the baby can feel her own tongue protruding but can’t “see” or picture her own tongue (because she has yet to see herself in a mirror). This is the so-called “correspondence problem”: If newborns can make the match, how do they do it?

For decades the consensus, influenced especially by the Swiss psychologist Jean Piaget, was that newborns couldn’t make such imitations. According to Piaget, imitation of this kind is only achieved at a later time, after the infant has gone through considerable learning and related cognitive changes.

But in experiments starting in 1977 Meltzoff and Moore appeared to demonstrate that very young babies could indeed perform such imitations, including babies who were only a few hours old. Their claims were widely hailed as inaugurating a revolution in the understanding of infant development. It seemed that human babies were born with far greater innate cognitive skills than those for which they had previously been given credit.

JP: How has the hypothesis been contested in recent years?

RL: Although there was always some skepticism about Meltzoff and Moore’s claims for neonatal imitation, it tended to be swept aside in the general enthusiasm for the new findings. But in an especially important longitudinal study published in 2016 by Oostenbroek and colleagues, the validity of the experimental findings was again called into question and the issue of neonatal imitation has become a major topic of dispute. We are living at a moment when there is a widespread replication crisis in the psychological and social sciences, and the debate over the validity of neonatal imitation claims is part of that wider context.

JP: What are the larger ramifications of this debate?

RL: It is understood by present-day critics that if neonatal imitation is a chimera, the several theories that have been premised on the phenomenon will have to be modified or abandoned. This is the focus of my book. I examine and critique four theoretical claims that I identify as especially important: (1) Claims regarding the Active Intermodal Mapping (AIM) mechanism proposed by Meltzoff and Moore to explain newborn imitation; (2) Alternative mechanisms proposed to explain the phenomenon, such as mirror neuron mechanisms or various associationist theories; (3) Theories about the newborn’s sense of self based on its capacity to imitate; and (4) Claims about the non-conceptual content of the newborn’s perceptions and mindedness also based in part on the hypothesis for neonatal imitation. 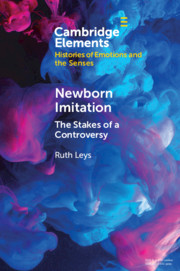 The question I ask is: What will happen to all of these theories if it turns out to be the case that claims for the existence of neonatal imitation are an illusion?

JP: How does the debate relate to issues at the center of the emotions field?

RL: Soon after Meltzoff and Moore published their findings, Field et al. suggested that infants could not only imitate tongue protrusion and other facial movements, as had been reported previously, but could also mime facial movements associated with specific emotions. Their experimental approach was closely modeled on Paul Ekman’s “Basic Emotion Theory” (BET), which assumed the existence of a certain number of universal, evolved, discrete “basic emotions” governed by subcortical “affect programs” and linked to characteristic or signature facial expressions. Field et al.’s proposition was that when an adult posed the specific facial expressions held to be associated with happy, sad, and “startle” emotional states, babies were able to copy them, even babies who were only a few hours old. So one could say that the claims for an innate capacity for imitation at birth and the claims for the existence of an innate set of evolved emotions and their associated expressions reinforced each other.

I think it is clear by now – the topic is the focus of my recent book, The Ascent of Affect: Genealogy and Critique (2017) – that the BET theory is empirically unsound and theoretically confused. Indeed, one can argue that the story of the unraveling of neonatal imitation claims and their associated theories, and the unraveling of the basic emotion paradigm and its associated assumptions, go hand in hand. 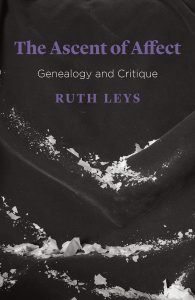 Leys’ 2017 volume, The Ascent of Affect: Genealogy and Critique, examines the post-WW2 historical development of the emotions as an object of study (Credit: Chicago University Press).

JP: How does this book fit in your larger oeuvre? Would it be an exaggeration to say that this is the fourth instalment in a tetralogy, encompassing Trauma, From Guilt to Shame, and The Ascent of Affect? All deal with psychic phenomena that have been debated in bifurcated terms you have labeled “intentionalist” vs. “anti-intentionalist,” the latter downplaying signification, volition, object-directedness and consciousness.

RL: It’s true that I’ve always been interested in what have seemed to me certain deep “structures” in the history of the human sciences. By this I mean certain tensions or oppositions that can be shown to have influenced and indeed organized a specific field, with the result that the structure constantly surfaces in certain debates over large stretches of time.

One such structure, which concerned me when I wrote my book on the genealogy of psychic trauma, was the tension between a “mimetic” versus an “anti-mimetic” understanding of the nature of imitation. This opposition concerned competing ways of understanding imitation – whether imitation involves the trauma victim’s defensive, immersive-hypnotic identification with the perpetrator to the point of the subject’s radical unconsciousness, or whether in defensively imitating the perpetrator the victim is nevertheless able to witness or spectate herself and her situation. These competing ways of theorizing imitation led to different consequences as regards the possibility of witness testimony, and so on.

In my subsequent books I became especially interested in the tensions in theorizing the emotions between intentionalist versus non-intentionalist approaches. The issue is whether it makes sense, as Ekman’s BET theory proposes, to conceive of emotions as non-intentional states that, under the right conditions, can be triggered to discharge involuntarily with characteristic autonomic responses and facial expressions without the subject’s cognitive involvement or indeed understanding of the object that triggered the emotional state; or whether, instead, emotions should be conceived in intentionalist terms as ”about” real or imagined objects in the world, in which case issues of cognition, meaning, and signification are central concerns.

The two sets of oppositions are indeed related, but they are not equivalent – they are not on all fours. By this I mean that the tension between mimesis and anti-mimesis is not absolute: historically each term of the opposition has been so implicated in the other that they can’t be completely separated – rather, again and again they tend to collapse into each other. In contrast, the opposition between intentionality and non-intentionality is absolute in the sense that one cannot, without incoherence, simultaneously believe that emotions are meaningless and that they are meaningful.

Professor Leys’ latest work, Newborn Imitation: The Stakes of a Controversy, part of the Cambridge Elements Histories of the Emotions and Senses series, is available as a free download until 21st July.