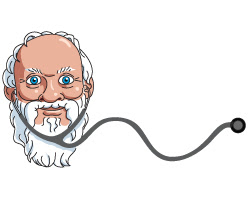 Imagine being able to practice philosophy through the NHS. The idea is not as far-fetched as it sounds. In fact, therapists and counselors in the UK are beginning to put together something called ‘Philosophical CBT’, which could radically change how people see philosophy and the wider humanities.

CBT, or Cognitive Behavioural Therapy, is now at the heart of the British government’s mental health policy. Successive British governments have committed a combined £580 million to a policy called Improved Access for Psychotherapies (IAPT), which hugely increases the availability of CBT through the NHS, and will train 6,000 new cognitive therapists by 2014. It is the boldest expansion of mental health services anywhere in the world.

While many mental health charities have welcomed this initiative, others in the mental health industry have fiercely criticized it. Therapists from other traditions say it has too much of a ‘one size fits all’ approach, and that 8 to 16 weeks of CBT only offers a short-term fix that ‘papers over the cracks’. Others have criticized CBT’s intense focus on an individual’s thoughts and beliefs rather than their socio-cultural and economic context.

Speaking personally, I found CBT very useful when I had depression and anxiety in my late teens. I went to a CBT support group: there wasn’t actually a therapist present, but we followed a CBT tape course, did the ‘homework’ and, after a few weeks, I stopped having panic attacks and got on the long road to recovery. That experience of CBT piqued my curiosity, because CBT reminded me very much of ancient Greek philosophy.

I started to research CBT, and interviewed the two founders of it – Albert Ellis and Aaron Beck – and discovered they had been directly inspired by ancient Greek philosophy, particularly by Stoicism, which insisted that ‘it’s not events, but our opinions about them, that cause us suffering’. CBT also takes from ancient philosophy the ‘Socratic method’ – Socrates’ idea that humans can be taught to examine their minds, bring unconscious beliefs into consciousness, and then rationally consider and challenge any beliefs that make them sick.

Ellis and Beck took ideas and techniques from ancient philosophy and brought them into the heart of western science, but in doing so, they removed any mention of ethics, values or the ‘higher meaning’ of life. They also removed the social, political and religious aspects of ancient philosophy, and turned it into a ‘tool-kit’ of non-moral, instrumental techniques for the individual. Beck then tested out the therapeutic effectiveness of these techniques with a barrage of empirical tests. This impressive body of evidence for CBT is what convinced our government to put half a million pounds into making it more available.

Yet something was lost along the way. Ancient philosophy wasn’t merely a set of instrumental techniques for the individual. Schools like Stoicism, Epicureanism and Scepticism also offered ethical theories about the good, which linked the personal to the social, cultural, political and cosmic. These schools didn’t agree on whether God existed or whether there was a higher meaning to human existence, but at least they recognized that was a conversation worth having. CBT narrowed the focus down to just the individual, and the result is a somewhat atomized and amoral version of self-help.

What we’re now seeing is the rise of the so-called ‘third wave’ of cognitive behavioural therapies, including mindfulness-CBT, Acceptance and Commitment Therapy (ACT), and Positive Psychology. These therapies often engage more directly with Eastern philosophies (particularly the mindfulness techniques of Buddhism), and in the case of ACT, they’re less afraid to include questions of values in therapy.

Positive Psychology has also included some mention of the ancient Greek philosophical schools that gave rise to CBT. Jonathan Haidt, for example, includes the Stoics and Aristotle in the course on ‘flourishing’ that he teaches at Virginia University. But on the whole, few cognitive therapists are aware of the links between CBT and ancient Greek and Roman philosophies, sadly. The emphasis is on training new practitioners and putting them to work, rather than teaching them where their techniques come from, or allowing them to question some of CBT’s ethical assumptions.

That’s beginning to change, however, thanks to a handful of therapists and counsellors here in the UK. Last year, a psychotherapist called Donald Robertson brought out an excellent book called The Philosophy of CBT, which expertly traced the many connections between ancient philosophy and CBT. He’s started to give workshops in ‘resilience’ that combine CBT, Positive Psychology and ancient philosophy.

Tim LeBon is another therapist who has championed the integration of CBT with philosophy. His 2001 book Wise Therapy argued for the synthesis of philosophy and traditional therapies – including CBT. Tim was one of the first to set up a philosophical counseling practice in the UK, but found that the market for PC was small and that many clients benefited more from a combination of philosophy and more traditional therapy rather than from philosophy alone. He undertook specialist CBT in training in 2009 and now combines a private practice with NHS work. Tim has successfully run workshops on ‘the good life’, which teach ideas from philosophy within the format of group discussions, and believes such a workshop could be adapted to work successfully within the framework of the NHS. You can read my interview with Tim about philosophical CBT here.

The UK is uniquely well-placed to develop ‘philosophical CBT’. We have in this country a wealth of talented people who are interested in the therapeutic benefits of philosophy – people like Mark Vernon, Antonia Macaro, Clare Carlisle, Alain De Botton, Robert Rowland Smith and others. And we also have a government uniquely committed to mental health services, and to a therapy whose roots are in philosophy. It would be valuable to strengthen the links between these two movements, as people like Donald and Tim are beginning to do.

It would teach practical and evidence-based techniques for self-management, but also explore the original philosophical contexts for these techniques, and create a space for philosophical discussion about wider questions – what am I seeking? what is the goal of life? what is the good society? – which could be discussed in a non-directive and open way, with a facilitator who drew links to different philosophical answers to these ‘big questions’.

How and where could we practice this ‘philosophical CBT’? First of all, we could provide workshops for cognitive behavioural therapists who are interested in exploring the historical and philosophical roots of CBT, and who want to discuss some of the wider assumptions of CBT – for example, what do we mean by ‘flourishing’ or ‘the good life’?

Secondly, clients and service users could be given access to philosophical CBT workshops on themes like resilience, flourishing and the good life. The NHS already provide ‘self-help workshops’ at their IAPT centres around the country, so there is a space and a precedent for this.

And thirdly, philosophical CBT could inform how we teach well-being in schools. The government has already looked at teaching Positive Psychology in schools: the problem with Positive Psychology is it presents itself entirely as a morally neutral science of the good life. That means it teaches a technocratic, instrumental model of the good life that leaves out goodness. It leaves out the important role of ethics, and of practical deliberation over values and ends. It tells people to seek a ‘higher purpose’, but leaves out any deliberation over whether the purpose you’re serving is good or bad. It tells people to seek ‘flow’ by engaging intensely in an activity, but leaves out the question of whether the activity you’re engaging with is genuinely worthwhile or not.

You can’t teach the good life without bringing in these subjective questions of values and ends. Positive Psychology tries to steer clear of ethical debate (that would be messy and unscientific), but the result is a process where people passively consume happiness techniques and ‘thinking styles’, and are deprived of the possibility of engaging in a conversation about the good life.

And the source material for ‘well-being classes’ is typically badly written, bureaucratic and (I’m sorry to say) soulless. Why not at least mention some of the original source material for these ideas? Philosophers like Seneca, Marcus Aurelius, Epictetus and Plato are some of the greatest writers our culture has ever produced – so why not introduce young people directly to them?

It’s exciting that our government is taking well-being and mental health seriously, both in schools and in the wider society. But the danger of the ‘politics of well-being’ is that it becomes technocratic, illiberal and elitist. The scientific experts get to decide what ‘well-being’ means, and the masses are simply conditioned in the correct techniques and lifestyles, rather than being empowered to engage in the ethical conversation as autonomous reasoning persons.

Philosophical CBT could be one way forward, combining the evidence-based approach of CBT with the more open-ended and values-conscious approach of philosophy. And it would introduce people to philosophies that connect the personal to the social and political, and that empower us not merely to overcome emotional disorders, but also to follow richer and more examined lives.