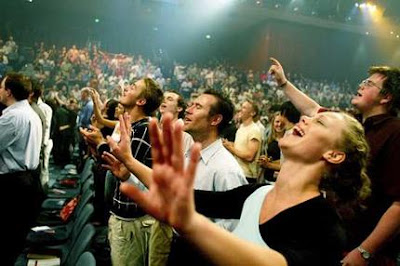 The New Inquiry has a great piece asking if TED has jumped the shark:

So many of the TED talks take on the form of those famous patent medicine tonic cure-all pitches of previous centuries, as though they must convince you not through the content of what’s being said but through the hyper-engaging style of the delivery. Each new “big idea” to “inspire the world” and “change everything” pitched from the TED stage reminds me of the swamp root and snake oil liniment being sold from a wagon a hundred years past. As Mike Bulajewski pointed out in a Tweet, “TED’s ‘revolutionary ideas’ mask capitalism as usual, giving it a narrative of progress and change.”

TED attempts to present itself as fresh, cutting edge, and outside the box but often fails to deliver. It’s become the Urban Outfitters of the ideas world, finding “cool” concepts suitable for being packaged and sold to the masses, thereby extinguishing the “cool” in the process.

At TED, “everyone is Steve Jobs” and every idea is treated like an iPad. The conferences have come to resemble religious meetings and the TED talks techno-spiritual sermons, pushing an evangelical, cultish attitude toward “the new ideas that will change the world.” Everything becomes “magical” and “inspirational.” In just the top-ten most-viewed TED talks, we get the messages of “inspiration,” “astonishment,” “insight,” “mathmagic” and the “thrilling potential of SixthSense technology”! The ideas most popular are those that pander to a metaphysical, magical portrayal of the role of technology in the world.

There are consequences to having this style of discourse dominate how technology’s role in society is understood. Where are the voices critical of corporatism? Where is there space to reach larger publics without having to take on the role of a salesperson, preacher, or self-help guru? Academics, for instance, have largely surrendered the ground of mainstream conversations about technology to business folks in the TED atmosphere.

I love TED talks, I love how they’re free, accessible, and have brought interesting ideas to millions of people. But this article makes some valid points that really needed to be made.

TED is a really interesting part of the Zeitgeist. It’s an expression of a culture which emerged in the 1990s, which has huge confidence and optimism in the power of social science and technology to improve the world instantly. It’s very much the Malcolm Gladwell view of the world, as expressed in books like The Tipping Point or Blink. It turns ideas into business pitches, and says, if you can’t express your idea in ten minutes, and make it sound shiny and new, your idea is not worth expressing.

I’m all for making ideas accessible, but what this basically means is we’re drowning in non-fiction social science books that are really ten minute TED talks pretending to be books. Careful academic work has been replaced by the over-hyped business pitch.

And TED has contributed to our culture’s chronic, deluded optimism in social science and tech. One example is Jane McGonigal’s TED talk: ‘Gaming can make a better world‘. This is a classic example of TED’s religious optimism in tech. McGonigal makes some nice points, but she seriously thinks gaming is going to solve our major global problems like climate change – and her optimism for this is based on one climate change game she devised. I’m sorry, but she’s still living in a 90s bubble of delusion. Gaming is not going to stop climate change.

TED talks often show a deep faith in measurements, data and statistics. The arch example is Hans Gosling’s talk on statistics, which is very entertaining, but for the TED audience it’s statistics-as-religious experience. It taps into their positivist faith in science: all we need to do is measure stuff, put it on a graph, observe the trends, then use this data to create a better world. We can even use such measurements to enhance global well-being (another popular TED talk is Nic Marks from the UK’s new economics foundation on well-being measurements).

Martin Seligman’s talk on Positive Psychology, again, is another example of TED’s deluded optimism in social science, and of how academic psychology has got drunk on the TED Kool-Aid (and the $$$ that roll in after a TED talk). We can make the entire world more spiritually flourishing, thanks to the magic of science! We just measure it, find the tech that improves the data, then roll it out – and guess what folks, we already got our first seed funding. Woo-hoo!

We face some really serious problems: mass unemployment, an unjust economic system, a global population heading for nine billion, and a planet struggling to support us. But if you can’t get your idea into a neat ten minute business pitch with the word ‘new’ in it, that makes the audience feel good about themselves, then sorry pal, get off the stage. I just invented a new machine that can solve depression and do your ironing! How about that folks!!!