Dr James Ellison is Reader in International History at Queen Mary University of London. In this post for the History of Emotions Blog he explores international friendship and the history of Anglo-American relations – from eighteenth-century hostility, via the Churchillian ‘special relationship’, to the present.

In 1927, the BBC adopted the motto: ‘Nation Shall Speak Peace Unto Nation’. The intent to broadcast peace and create friendship between nations was of its time. In the years following the First World War, the hope in international affairs was for more friendship and less enmity. It was there in the formation of theLeague of Nations, in 1919, and, later, in the United Nations. Institutionalised friendship between peoples through diplomacy and politics was seen by progressives as the antidote to war. Of all relationships between nations in the twentieth century, claims to friendship have perhaps been made most consistently – especially after 1945 – by the Americans and the British. They even have a term for it: the special relationship.

Figuring out what has been special about the Anglo-American relationship has preoccupied commentators and historians since Churchill first coined the phrase in 1946. Friendship is certainly an element, but taking its measure is far from easy. If friendship can be defined as action without self-interest, then it does not apply. No nation speaks peace unto another nation without wanting something in return. If friendship is based on common interest, then it certainly did and does apply and, moreover, it became a political tool used to affirm and reaffirm a relationship which was of value to both sides, for similar and different reasons. It has also been used rhetorically, both to ceremonialise a strategic alliance and to camouflage differences. At different levels in the hierarchies of international affairs between the two nations, it has undeniably produced the kinds of genuine personal bonds that we associate with friendships between individuals.

It had, of course, not always been that way. Struggles for independence, such as that of 1776, do not often produce immediate friendships. Hence George Washington described the new nation’s policy as being against ‘the insidious wiles of foreign influence’ and to ‘steer clear of permanent alliances with any portion of the foreign world’. Isolationism had been born and the Republic’s anti-imperialism ensured that no hands of friendship would be offered across the Atlanticas the new nation evolved. And the feeling was mutual. Samuel Johnson declared in 1778, ‘I am willing to love all mankind, except an American’.

An 1898 poster promoting British-American rapprochement, showing Columbia and Britannia in the background holding flags, and Uncle Sam and John Bull in the foreground shaking hands.

The cultural ties which would breed friendships outside, and inside, governments began in the nineteenth century. Such was the interchange between elites, especially through Ivy League and Oxbridge scholarly exchanges, and between peoples as literature and science, trade and finance, drew the two nations closer. Organisations whose purpose it was to promote Anglo-American friendship grew. In 1902, ‘The Pilgrims of Great Britain’ were formed inLondon, followed six months later by a companion group inNew York. Membership was reciprocal and the Pilgrims’ aim, which remains today, was to foster fellowship between Americans and Britons and other English-speaking peoples.

Hopes for fraternity in the first half of the twentieth century were not always held in the corridors of power. As Chancellor of the Exchequer in 1927, Churchill told his Cabinet colleagues that ‘no doubt it is quite right in the interests of peace to go on talking about war with theUnited Statesbeing “unthinkable”’. Yet he added, ‘everyone knows that this is not true. However foolish and disastrous such a war would be … we do not wish to put ourselves in the power of theUnited States’. Being half American did not seem to incline Churchill towards theUnited Statesat the end of the twenties. Any friendship he felt forAmericaor Americans was outweighed by international rivalry and lack of common interest in international affairs. Yet in less than twenty years, all that changed. Claims to Anglo-American friendship were the result.

In his ‘Sinews of Peace’ speech delivered at Westminster College,Fulton,Missouri, on 5 March 1946, Churchill did not only talk about the iron curtain descending across the continent of Europe. The ‘crux’ of what he had travelled to the United States to say was this:

Neither the sure prevention of war, nor the continuous rise of world organisation will be gained without what I have called the fraternal association of the English-speaking peoples. This means a special relationship between the British and the Commonwealth and Empire and theUnited States. … Fraternal association requires not only the growing friendship and mutual understanding between our two vast but kindred Systems of society, but the continuance of the intimate relationship between our military advisers…

The use of the language of friendship, and of intimacy, was not employed here by Churchill for the first time to evoke, and reinforce, UK-US ties. His personal relationship with President Franklin Delano Roosevelt remains the most special of all presidential-prime ministerial friendships. 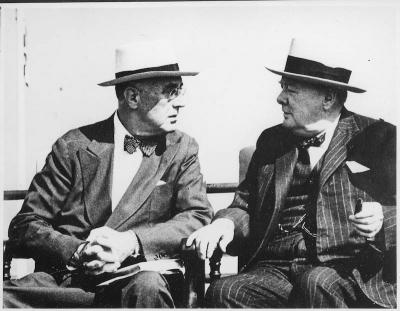 Roosevelt and Churchill – the most special of special relationships

It held within it the elements that would go on to build friendships between others and between the two nations: shared experience of war; common values; ease of communication; in-jokes and an affability known to a class of politicians and officials in the middle part of the twentieth century, and perhaps beyond. Churchill and Roosevelt’s alliance flowered in the letters they exchanged – running to thousands – during the Second World War, when the president used the codename ‘Former Naval Person’ when writing to the prime minister to create familiarity (Churchill had been First Lord of the Admiralty and Roosevelt had been Assistant Secretary of the Navy). Churchill’s intentions went much further. On becoming prime minister, he attempted to claim the natural friendship of the American people to engage Roosevelt alongside Britain in its darkest hour. Personal ties, however, did not convince Roosevelt to take America to war. Had it not been for Pearl Harbor, camaraderie would not have matured into military and strategic alliance. Without national interest in international affairs, friendship means little.

Nevertheless, it played its part in the protocols of statesmen and women. When Churchill learned of Roosevelt’s death in April 1945, he telegraphed the president’s widow, Eleanor: ‘I have lost a dear and cherished friendship which was forged in the fire of war.’ Eleanor would herself call on the same language after the war as she became a champion of the United Nations. On 12 April 1948, she unveiled a statue of her late husband in Grosvenor Square, close to the US Embassy in London. In her speech, she invoked the purpose of the friendship between English speaking peoples as upholding freedom throughout the world. She said that she would like her husband to be known as ‘valiant for friendship,’ not just for the Americans and the British, but for all humankind to ‘break down misunderstandings and differences’ and ‘to build a world of friendship’. 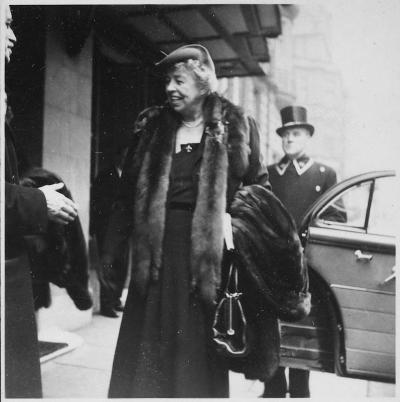 The rhetoric of Anglo-American friendship may now be as, or more, significant than the strategic partnership that joins the two nations. After all,Britain no longer wields the power that it once did and other friends have more. Yet an old and tested friendship, and the story that can be told about it, can still be reaffirming and have greater purpose. A special relationship today? Cameron and Obama trade bottles of beer, in Toronto in 2010, to settle a bet they made on how their nations’ teams would fare in the World Cup.

To get a sense of that, consider how President Obama evoked the history of Anglo-American friendship as a political tool for today in his speech to the Houses of Parliament on 25 May 2011:

As two of the most powerful nations in the history of the world, we must always remember that the true source of our influence hasn’t just been the size of our economies, or the reach of our militaries, or the land that we’ve claimed. It has been the values that we must never waver in defending around the world – the idea that all beings are endowed by our Creator with certain rights that cannot be denied.

That is what forged our bond in the fire of war – a bond made manifest by the friendship between two of our greatest leaders. Churchill and Roosevelt … what joined the fates of these two men at that particular moment in history was not simply a shared interest in victory on the battlefield. It was a shared belief in the ultimate triumph of human freedom and human dignity – a conviction that we have a say in how this story ends.