Dr Santanu Das is Reader in English Literature at King’s College London, and the author of Touch and Intimacy in First World War Literature. In this blog post he explores the unique kind of male bonding that occurred in the trenches, confounding all our usual emotional and social categories.

In the trenches of World War I, the norms of tactile contact between men changed profoundly. Mutilation and mortality, loneliness and boredom, the strain of constant bombardment, the breakdown of language and the sense of alienation from home led to a new level of intimacy and intensity under which the carefully constructed mores of civilian society broke down. As historian Joanna Bourke has documented in her exciting work on First World War and masculinity, men nursed and fed their friends when ill; they bathed together; they held each other as they danced, and during the long winter months, wrapped blankets around each other.

These moments were often grounded in experiential reality, the nature of these encounters – men on the verge of death, under fire, or being ill – giving them an emotional nakedness and intensity that not only outlive their contingent nature but that continue to grow in emotional value and resonance. It is debatable whether these relationships were those of “comradeship” or personal “friendship” or trench “brotherhood”: each of these relationships had its particular nuance and value, though it is difficult to straitjacket human relationships and feelings, especially in times of physical and emotional extremity. Moreover, they were all forms of male intimacy during crisis with inevitable overlaps or continuity at times and touch seems to have cut across the range of these relationships. 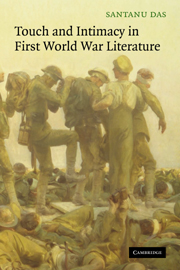 The conditions of trench life dictated that there could be moments of perilous intimacy between relative strangers: the trench journal Poil et Plume (October, 1916) records an incident where a severely wounded man fell on an unknown stretcher-bearer and said, “Embrace me. I want to die with you”. On the other hand, W. A. Quinton recalls how one night, as he lay shivering, “old Petch put his overcoat in addition to my own over me, taking care to tuck me in as a mother would a child.” A. F. B. notes, in The Third Battalion Magazine, that Smalley was the great favourite of the Third Battalion for “his heart was as big as his body – his strength like a lion’s – his touch to the wounded as a woman’s.” A new world of largely non-genital tactile tenderness was opening up in which pity, thrill, affection and eroticism are fused and confused depending on the circumstances, degrees of knowledge, normative practices, and sexual orientations, as well as the available models of male-male relationships.

Many returned soldiers carried with them photographs of their dead comrades or small items that belonged to them; men such as Ivor Gurney remembered the voices of the men in his company, the “roguish words by Welsh pit boys”.  And yet, the most intimate moments with the comrades were those of actual body contact. These soldiers are often haunted by the feel of their comrades’ bodies as life ebbed out and the warm mutuality of the embrace was lost forever. The most immediate and yet the most evanescent of human senses, touch could only be preserved in memory and through language. Consequently, there is the urgent need within war writings to remember and re-present these moments, to evolve a literary language around touch.

The writings of the soldier-poets may be regarded as a phantasmatic space where they would resurrect their dead comrades through language, infusing them with the warmth they had once known: “I clasp his hand”, “For a moment the touch/Of a warm hand” and “I had clasped warm, last night”. War literature is haunted by the sense of touch, from Rupert Brooke’s “linked beauty of bodies” to the “full-nerved, still-warm” limbs of Wilfred Owen’s dying boy and from Siegfried Sassoon’s “my fingers touch his face” to Robert Nichols’ more sentimental “My comrade, that you could rest / Your tired body on mine.” Remarque inAll Quiet on the Western Front distils all the poignancy of Freundschaft into a single, silent gesture: “Kat’s hands are warm, I pass my hand under his shoulders in order to rub his temples with some tea. I feel my fingers becoming moist.” Sherriff’sJourney’s End, one of the most popular war plays, culminates in a similarly intense scene of tactile tenderness: “Stanhope […] lightly runs his fingers over Raleigh’s tousled hair.”

If shell shock had been the body language of masculine complaint, the poetic efflorescence of the 1920s was the celebration of what the Lawrentian hero Mellors famously describes as the “courage of physical tenderness” forged among men in the trenches: “I knew it with the men. I had to be in touch with them, physically and not go back on it. I had to be bodily aware of them and a bit tender to them.” Whether or not there is any conscious or unconscious erotic investment in these moments, they indicate a new level of intensity and intimacy in male-male relationships. Above all, these moments of physical bonding and tactile tenderness during trench warfare require us to reconceptualize masculinity, conventional gender roles, and notions of same-sex intimacy in postwar England in more nuanced ways than have been acknowledged in the criticism of war culture, studies of gender and sexuality, or the more general histories of the body, intimacy, and gesture.

In the trenches, the male body became an instrument of pain rather than of desire. World War I lasted over four years and claimed nine million lives; an average of 6,046 men were killed every day. In such a context, same-sex intimacy must also be understood in opposition to and as a triumph over death: it must be seen as a celebration of life, of young men huddled against long winter nights, rotting corpses, and falling shells. Physical contact was a transmission of the wonderful assurance of being alive, and more sex-specific eroticism, though concomitant, was subsidiary. In a world of visual squalor, little gestures – closing a dead comrade’s eyes, wiping his brow, or holding him in one’s arms – were felt as acts of supreme beauty that made life worth living. Although these acts may overlap with eroticism, such experiences should not simply be conflated with it – or, for that matter, with the repression or sublimation of sexual drives.

Consequently, in order to discuss intense same-sex relations during war, we must introduce a different and less distinctly sexualized array of emotional intensities and bodily sensations, a fresh category of nongenital tactile tenderness that goes beyond strict gender divisions and sexual binaries. The need for such an approach becomes particularly evident when examining representations of the dying kiss in World War I literature.

The Reverend Okeden writes to his wife: “I’ve got a little secret […] One dear lad very badly wounded […] said, ‘Hello Padre old sport’ and then ‘Come and kiss me Padre’ and he put his arms round me and kissed me.” Similarly, when his close friend Jim dies, a grief-stricken Lance-Corporal D. H. Fenton writes to his mother, Mrs Noone that ‘I held him in my arms to the end, and when his soul had departed I kissed him twice where I knew you would have kissed him – on the brow – once for his mother and once for myself’. The recurring, almost ritualistic phrase, “mother’s kiss”, suggests a powerful reconceptualization of both masculinity and male-male bonds through an assumed maternal impulse of security and tenderness, a moment of “perilous intimacy” to borrow a phrase from Lawrence.

It is a great irony that the world’s first industrial war, which brutalized the male body on such an unprecedented scale, also nurtured the most intense and intimate of male bonds. The myth of strong, invincible masculinity fostered through the works of Rudyard Kipling and Rider Haggard, later advocated by men such as Hulme, Lewis and Pound and finally embodied in the stolid figure of General Haig, exploded in the mud and blood of the Western Front. A very different order of male experience, one that accommodated fear, vulnerability, support and physical tenderness, sprang up in its place. What challenged heterosexuality in post-War England was not sexual dissidence but memories of such relationships. These were neither of romantic love nor blokish bonding nor homoerotic frisson: with each of these elements, there is a distinct overlap and, yet always, a distinct difference. Eroticism might occasionally have played a part, but it was not the founding impulse. Sexuality had not yet hijacked an intimate history of human emotions. “Frightful intimacy” is as far as language can go: the dying kiss was perhaps its true sign, the mouth filling the gap left by language.

Listen to Episode 10 of Five Hundred Years of Friendship: A Battalion of Pals

[This post was first published as ‘The Dying Kiss: Gender and Intimacy in the Trenches of World War I‘ by Santanu Das licensed as Creative Commons Attribution-Non-Commercial-Share Alike 2.0 UK: England & Wales]