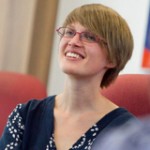 This is a guest post by Dr. Sarah Comyn and the first in this week’s ‘Romantic Voices’ series. Sarah is Literature Lecturer at Trinity College, University of Melbourne in Australia. Her research focuses on the transhistorical relationship between political economy and literature. She is currently a Visiting Fellow at Chawton House Library where she is researching the political economic writings of Jane Marcet, Maria Edgeworth and their literary networks, in a project called, “Blue Ladies and Political Economy: Women Writers, the Popularization of Political Economy and the Discourse of Happiness.” Sarah will be giving a paper based on the material discussed in this blog post at the British Association for Romantic Studies’ conference taking place 22-23 June in Oxford.

Maria Edgeworth exclaimed, in a letter to Mrs Ruxton in March 1822, that “[i]t has now become high fashion with blue ladies to talk Political Economy” and make “a great jabbering on the subject, while others who have more sense, like Mrs. Marcet, hold their tongues and listen.”[1] Mrs. Jane Marcet, author of more than ten books, ranging from natural philosophy to grammar, arguably did much more than simply listen. Admired by Thomas Malthus and David Ricardo while dismissed by Joseph Schumpeter as “economics for what we should call high-school girls” there is no doubt that Marcet’s Conversations on the Political Economy (1816) was widely read, not only by Schumpeter’s school girls but by adults and those who we would now describe as the forefathers of economics.[2] Labelled as a populariser or more damningly a propagandist, Marcet receives very little critical attention today. My research attempts to recover Jane Marcet’s influence on political economy from her current obscurity.

Beginning with Edgeworth and Marcet, my research aims to explore the networks of influence and reading economies established by authors such as Margracia Loudon, Mary Leadbeater and Harriet Martineau. It will investigate the relations between gender, literature and political economy at the vital early nineteenth-century moment when political economy was being consolidated as a discipline. The discussions of happiness and political economy that occur in the texts provide an intriguing perspective upon the question of how emotions were understood and expressed in the nineteenth century within the discipline of political economy that is often assumed to be antithetical to the conception and expression of emotion. 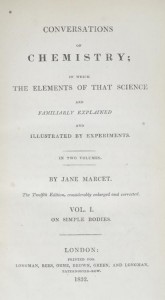 Born Jane Haldimand in 1769, Jane Marcet was the “only surviving daughter to the Swiss merchant and banker Anthony Francis Haldimand.”[3] Her brother William would also become a merchant banker and eventually the director of the Bank of England. Elizabeth Morse argues that Jane “shared in the excellent home education provided for her brothers” and when her mother died when she was fifteen “she took over the running of the family household.”[4] Her introduction to economics, at least in its domestic form, therefore started at a young age. In December 1799 she married the physician Alexander John Gaspard Marcet, who exposed her to the world of science (more broadly) and would later encourage her to write and publish her books. Jane Marcet attended Sir Humphrey Davy’s lectures at the Royal Institute and invited Davy and his wife to dine at their house. It is these lectures, conversations and the assistance from her husband that are said to have inspired the writing and publication of her most famous work, Conversations on Chemistry, Intended more Especially for the Female Sex, which she published anonymously in 1805 and would eventually go to 16 editions. Michael Faraday claimed it was this book that encouraged him to study science. The Conversations on Chemistry sets up the educational writing style of “conversations” or dialogues between a Mrs Bryan (later Mrs. B. in political economy) and Caroline and Emily (Emily disappears by the time Marcet is writing the Conversations on Political Economy). According to Bette Polkinghorn, Richard Lovell Edgeworth is said to have encouraged Marcet to change the student, Caroline, to a boy for her work on political economy in order to improve sales. Marcet, however, refused.[5]

Marcet’s concern with the gendered power of feeling, and the impact it may have on her readers’ understanding of political economy is expressed early in her work. In her preface to the Conversations of Political Economy, she argues that the “colloquial form” is an appropriate format for the content of her book because the dialogue illustrates the questions that are “likely to arise in the mind of an intelligent young person, fluctuating between the impulse of her heart and the progress of her reason, and naturally imbued with all the prejudice and popular feelings of uninformed benevolence.”[6] During the conversations between the ebullient student Caroline, and her teacher Mrs. B., the reader is taken on a journey through Caroline’s introduction to political economy in which her charitable and poetic impulses are continually dismissed by Mrs B’s commitment to the ‘truth’ of political economy. Despite Caroline’s inability to withstand Mrs B.’s “attacks” on Caroline’s reasoning, Mrs. B is careful to respond to the emotional reactions of her student. When Caroline dismisses political economy as “the love of riches,” Mrs. B argues, “political economy is particularly inimical to the envious, jealous and malignant passions; and if ever peace and moderation should flourish in the world, it is to enlightened views of science that we should be indebted for the miracle.”[7] 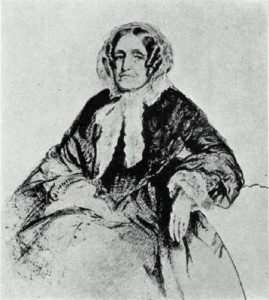 Throughout her text, Marcet is arguing for the credibility of political economy as a science, a courageous undertaking as economics as economics had not been “a gentleman’s subject since it dealt with trade.”[8] Her strategy for exerting the scientific qualities of political economy while writing an accessible text is at once complex and quite simple: she attacks literature, poetry more specifically and Oliver Goldsmith in particular. And yet the conversations are not a form of catechism, there is something quite intoxicating and seductive about them and I’d like to suggest it’s the use of a more figurative writing style and her constant attention to the power of feeling that allows for this. As Jane Marcet rereads and rewrites the “masters” of political economy, it seems we too must return and reread Jane Marcet. Is she populariser, propagandist or political economist?

[2] Bette Polkinghorn, “Popularises as contributors to economics: The unappreciated tribe,” in Joseph A. Schumpeter: Historian of Economics: Perspectives on the History of Economic Thought, ed. by Laurence S. Moss (London and New York: Routledge, 1996), p. 39.

[6] Jane Marcet, Conversations on Political Economy; in which the elements of that science are familiarly explained, 6th ed. revised and enlarged (London: Longman, Rees, Orme, Brown and Green, 1827) p. vi.