This guest post is by Dr Marie Louise Herzfeld-Schild, a recent Visiting Fellow to the Centre for the History of the Emotions, and co-organiser of our workshop on Music, Medicine and Emotions. 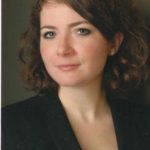 in Heidelberg and Yale and received her PhD from FU Berlin (2013). She was part of the cluster of excellence “Languages of Emotions” and researcher at the centre for the history of emotions at Max-Planck-Institute for Human Development Berlin. Since 2015 she has been a postdoctoral researcher at the research group “Transformations of Knowledge” at a.r.t.e.s. Graduate School for the Humanities, University of Cologne, and is currently writing a book about the emotional effects of music between medicine and aesthetics in the 18th and 19th centuries.

In 1780, German Enlightenment writer and philosopher Johann Jakob Engel published an open letter to composer Johann Friedrich Reichardt entitled “On Painting in Music”[1]. In this letter, one of the key musical texts of late 18th century Germany, Engel introduced a concept of representation in music that rejects musical imitation of external objects and instead propagates a musical representation of inner objects, that is the emotions the external objects trigger. As a prominent and central link within his chain of arguments, Engels referred to 18th century senso- and psychophysiological knowledge about emotions, concentrating in particular on the nerves and the interaction of body and soul:

“All representations of the passions in the soul are inseparably bound up with certain corresponding movements in the nervous system, and are maintained and strengthened by the perception of these movements. But it is not just that these corresponding natural vibrations arise in the body when the representations of the passions have already been stimulated in the soul; these representations also arise in the soul if the related vibrations are already produced in the body. The action is reciprocal: the same path that runs from the soul into the body runs back from the body into the soul.”[2]

Within these processes, sound – and music in particular – plays a most important role since “by nothing else, however, are these vibrations so certainly, so powerfully, so various produced, as by tones.”[3]

The fact that nerves, body and soul gain so prominent a part in Engel’s text shows how 18th century senso- and psychological knowledge about the emotions was constitutive for contemporary aesthetical and artistic concerns. This was due not least to a small group of physicians in Halle (Saale), which promoted a new way of exploring human beings by means of combining medicine with philosophy, and thereby gave particular attention to sensual and aesthetical concerns. These physicians – namely Johann Gottlieb Krüger, Ernst Anton Nicolai and Johann August Unzer, who were all physicians as well as philosophers – concentrated on the connection of body and soul in emotional matters. Based on empirical observations resulting from their medical investigations and experiences, they knew the body to act on the soul as well as the soul to act on the body. Thus they established exactly the same relationship between body and soul as inseparable and connected through mutual interaction that Engel emphasised in his letter. Krüger, Nicolai and Unzer had published their knowledge in several medical treatises since 1740[4]. Subsequently, this idea found its way into aesthetic writings. For example, Johann Gottfried Herder referred to Krüger’s Naturlehre in several of his writings, most prominently in his essay On the Cognition and Sensation of the Human Soul from 1778[5].

Consequently, we can assume that Engel knew the writings of Krüger, Nicolai or Unzer. He may have discussed these writings with his close friend Moses Mendelssohn who demonstrably knew Krüger’s work since he built his work Über die Empfindungen (1755) on ideas from Naturlehre; or Engel may have spoken about Krüger et al with his likewise close friend Ernst Platner who also supported the idea of a reciprocal relationship between body and soul in his famous Anthropology for physicians and the worldwise (1772): “It is finally possible to observe body and soul together in their reciprocal relations, their limits and connections, and that is what I call anthropology.”[6]

Until a few years ago, Platner’s treatise had been said to mark the German anthropological turn. Since then, it has been discussed whether this turn should actually be predated to Krüger’s, Nicolai’s and Unzer’s thoughts which pre-empt Platner’s concept (although they never used the term “anthropology”). Platner’s concept of the nervous systems, however, differs from the concept of the elder physicians: while the latter described the movements of the nerves as analogous to the vibrations of the strings of a musical instruments, Platner explicitly rejected this concept in favour of an understanding of the nerves as canals containing nervous fluid that is set in motion by the touch of external objects. In “On Painting in Music”, Engel explicitly used the word “vibrations” (“Erschütterungen”) when speaking about the movements of the nerves. Although it can not be finally proven, it seems that Engel leans on the understanding of the older physicians rather than on that of his friend Platner. 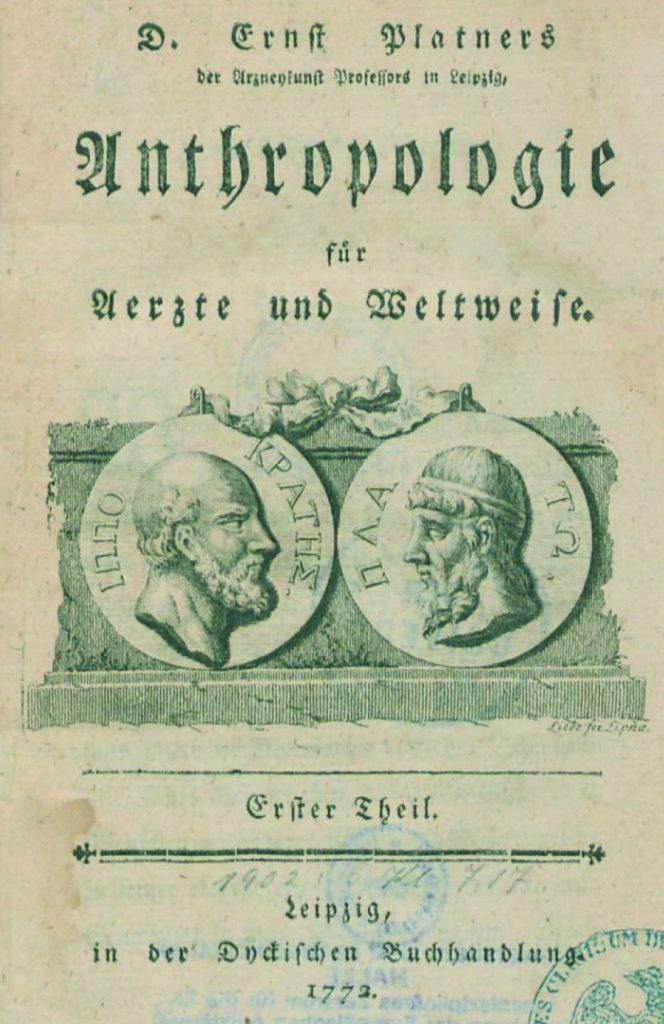 To emphasise the new methodical approach, the “middle way” between medicine and philosophy, the cover sheet of Ernst Platner’s Anthropologie für Ärzte und Weltweise (1772) shows the portraits of Hippocrates, the “father of medicine”, and Plato, the famous ancient Greek philosopher.

For now it must remain unresolved as to how exactly the knowledge about this commercium mentis et corporis found its way to Engel. For an investigation that aims to combine the histories of music and emotions, however, it is significant (1) that Engel fell back on a medical concept of bodily and emotional knowledge in the first place, and (2) how he used it for his own concerns. In fact, he transformed the medical knowledge into an aesthetical and artistic concept of compassion that understands expression as equating impression: “The howls of a beast in pain set the nerves of a beast that is not in pain into a similar vibration, and that similar vibration arouses a similar feeling in the latter beast’s soul.”[7] Consequently, when a certain kind of music expresses a certain kind of emotion, the listeners will experience exactly the same kind of emotion through the movements of their nerves and their souls by means of sympathy and compassion. So Engel eventually comes to his conclusion about the right way of music composing, for composers should “choose[] tones that have a certain effect on the nerves, which is similar to the impression of a given feeling. To this end [they] also choose[] particular instruments and higher or lower tones.”[8]

This short example suggests the following conclusion: a close reading of Engel’s letter “On Painting in Music” reveals that his new kind of music aesthetics clearly derived from knowledge about the nerves, the body and the soul and can only be fully appreciated in terms of these medical concepts. On a methodological level, this shows how valuable and promising sources from the history of medicine can be for research in the area of music and emotions. In connection with coeval knowledge about the aesthetic and artistic qualities of music, the sources from medical history can provide fundamental understandings of past knowledge about the emotional effects of music and can also lead to further investigations regarding musical practices, concentrating for example on aspects of music composition or historically informed performance practice.