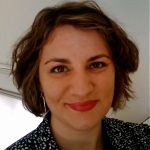 rt of Disgust Week, in which a group of scholars from a range of disciplines explore different aspects of disgust. Natalie K. Eschenbaum is Associate Professor and Chair of English at the University of Wisconsin, La Crosse. Her co-edited (with Barbara Correll) collection, Disgust in Early Modern English Literature (New York: Routledge, 2016) includes her essay, “Desiring Disgust in Robert Herrick’s Epigrams.”

Last year The New Yorker released a podcast entitled “The Pleasures of Disgust”; it opens with the podcasters describing the items that most disgust them (things like pretzel slime mold, silverfish, and bubble tea). What follows is an excited and playful discussion that touches on some important recent research on disgust by social psychologists and philosophers (like Colin McGinn and Johnathan Haidt). This podcast is one of many popular news engine pieces that responds to a surge in scholarly interest in disgust; the interest started with the pioneering work of psychologist Paul Rozin, who began researching the cultural evolution of the aversive emotion in the 1980s. According to The New York Times, disgust is now the “hot” new emotion to study: “Disgust is having its moment in the light.” Thanks to the recent Disney Pixar movie, Inside Out (2015), which introduces us to the anthropomorphized figures of a few different emotions (Joy, Fear, Sadness, Anger, and Disgust), we can now have a plastic “Disgust” figurine watch over us while we work, or we can fall asleep snuggling her green-hued likeness in plush form.

My own (academic) relationship with disgust began with the poetry of Robert Herrick, a seventeenth-century English vicar who wrote disgusting epigrams about a few of his village residents. For instance:

Reapes eyes so rawe are, that (it seemes) the flyes
Mistake the flesh, and flye-blow both his eyes;
So that an Angler, for a daies expence,
May baite his hooke, with maggots taken thence.[1]

This poem happens to describe one of the things that most disgusts me: maggots in rotting flesh. I remember physically cringing the first time I read “Upon Reape” in the late 1990s. I also remember immediately re-reading it. I found what the epigram described repulsive, but its poetic presentation perversely attractive. It was this emotional tug—of disgust and desire—that most attracted me to the study of disgust. If, as Aristotle claims, the purpose of poetry is to delight and instruct, I wondered why disgust delights and how or what it instructs. I also noticed that little critical attention had been paid to disgusting poems like “Upon Reape” up to that point; most readers had dismissed such poems as distasteful and unworthy of critical attention.[2] I wondered if there was critical aversion at play; I felt ill equipped to read disgust critically.

Literary scholars now have quite a bit of nuanced research to inform their readings of disgusting literary texts. In the collection I recently edited with Barbara Correll, Disgust in Early Modern English Literature (New York: Routledge, 2016), it struck me that many of the contributors were concerned with the crossing of disgust and desire. The New Yorker podcast discusses the pleasures of disgust too, and the fact that artists exploit the extreme and opposing reactions that disgust evokes. What is strange about disgust in the context of desire, of course, is that desire does not necessarily cancel out disgust. For example, when I desire to re-read a poem about rotting flesh and maggots, it is not to erase my disgust, but to intensify and to relish it; disgust thus becomes a desirable instead of an aversive emotion.[3]

Much seventeenth-century poetry poses desirable and disgusting images in opposition to one another. John Donne’s “Elegy 2: The Comparison” is a compelling example of this:

As the sweet sweat of roses in a still,
As that which from chaf’d musk cat’s pores doth trill,
As the almighty balm of th’early east,
Such are the sweat drops on my mistress’ breast.
And on her neck her skin such luster sets,
They seem no sweat drops, but pearl carcanets.
Rank sweaty froth thy mistress’ brow defiles,
Like spermatic issue of ripe menstruous boils, (ll. 1-8)[4]

This particular elegy has been the subject of great debate because the disgust is read as misogyny. In a recent article, Elizabeth Bobo summarizes the opposing readings: “Traditionally, the work has been understood as one which contrasts the good mistress of the speaker with the bad mistress of the addressee. More recent interpretations have disagreed, claiming that the poem describes a single woman, not two.”[7] Bobo argues that whether the poem is about a single women or two, the good mistress is consistently described in negative terms, and the poem demonstrates degrees of yuckiness in women as opposed to oppositions of good and bad. In a sense, Bobo has come to the opposite conclusion regarding Donne’s disgust than I did in my reading of Herrick’s; disgust eclipses desire, instead of the other way around. What I like about this reading is that it emphasizes how disgust dismantles binary oppositions. Disgust protests to be the opposite of desire, but it isn’t. And things that disgust can also titillate. Especially when they are crafted in poetic art.

Donne’s poem deals in similes; in the first lines, a mistress’s drops of sweat are likened to rose perfume, to a cat’s anal glands, to pearl jewels, and to oozing boils. The elegy ends with the narrator saying that the bad mistress should be left, and he in turn “will leave comparing thus, / She and comparisons are odious” (ll. 54-55). But the disgusting similes are the pleasure and art of this verse. Poets cannot stop comparing, so perhaps he means to leave his writing as it is (as opposed to leaving it behind). Comparisons might be hateful and repulsive, but they are never solely this. I admit I have trouble seeing aesthetic beauty in an oozing boil or a maggoty eye, although I appreciate that these items are as much the stuff of poetry as roses and pearls, and the ability to capture their vile natures in words is perversely pleasing. But even if there is beauty in disgust, I do not want to dismiss the charges of misogyny in this particular poem, because disgust is often used in violent and discriminatory ways against others. In fact, Donne’s elegy demonstrates how useful it can be to bring disgust to the fore and to break down the binary that gives it power.

This scholarly moment is asking us to take a serious look at disgust. My look has already shown me too much to summarize here, but I did want to share a taste of how poetry complicates the disgust/desire binary. Sometimes, I need to step away from my desk because this research makes me feel physically sick, but this most visceral emotion also draws me back for more, again and again.