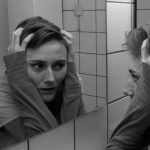 Ruth Rebecca Tietjen recently (2017) finished her PhD-thesis in Philosophy of Emotions at the University of Tübingen, Germany. She works on self-reflexive and mood-like phenomena of fear and anxiety, on religious and mystical feelings. She is particularly interested in how feelings relate to self-hood and processes of self-transformation. Ruth tries to bridge the gap between analytic and existential philosophy and to explore the boundaries of philosophy by touching the borders between philosophy, literature and performance.

Let’s start by having a look at the picture of an abyss: 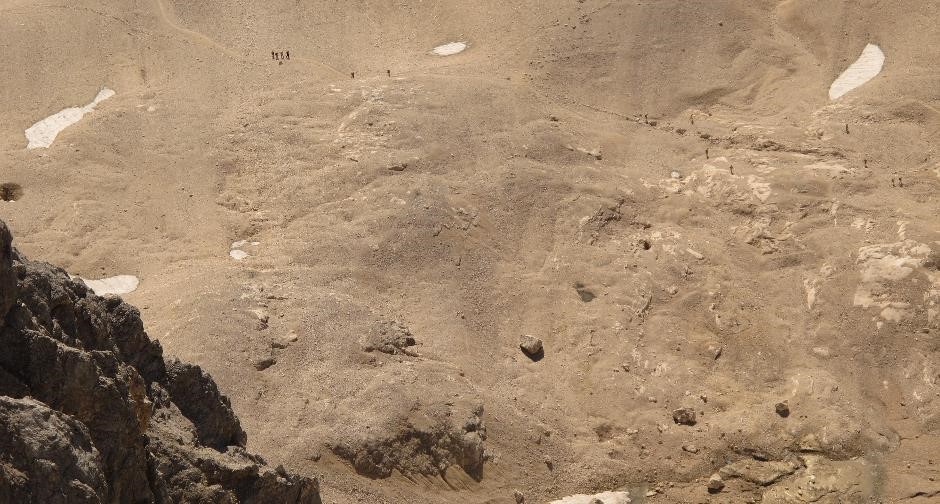 On my last meters to the summit of the Zugspitze, the highest mountain in Germany, I have to descend some pegs, walk some meters on the ridge, a steel cable on my left side and the abyss on my right side, climb two short ladders, and finally pass another steel cable leading me to the golden summit cross. There are crowds of tourists who, together with me, want to reach the cross sparkling in the sun: people without any experience in mountaineering, young children, old people, all of them having reached the huge platform below the summit by cable car. They all are eager to finally climb up the last meters in order to take a picture proving they had been on the top of Germany. Right in front of me one of the most impatient visitors slips, picks himself up and continues pushing forward. This is the moment, when, for the first time of the day, I really become scared: “If he’s right above me on the ladder and slips again, he’ll definitely take me and some other people with him into the depths”, or so I think. So I’m happy to give way to the oncoming traffic and to thereby increase the distance between him and me. But safety with regard to this outer threat does not end my anxiety. Maybe I as well overestimated my skills? What if I slipped myself? What if I got dizzy? Hadn’t this thought – the thought that I might get dizzy – in combination with the sight of the abyss already started to elicit some kind of dizziness in me? I might fall down the precipice thanks to a fault of my own, or maybe even of my own free will. 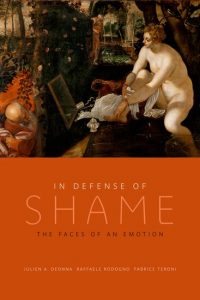 For an inspiring analysis of a “traditional” self-reflexive emotion see, for example, Deonna’s, Rodogno’s and Teroni’s book on shame.

For reasons of safety, let’s take a step back, and ask which kind of feeling we are confronted with in this description. We are confronted with a feeling of fear; a feeling of fear of a specific kind: First, besides dimensions of world-directed fear – fear directed at outer events –, the feeling contains dimensions of self-directed fear – fear directed at dangers impending from within ourselves. We are afraid of how we might react, of whether our abilities will suffice to reach a presupposed goal, and/or of whether our will will be strong or stable enough to realize our aims. Metaphorically speaking, in being confronted with the outer abyss into which we might plunge, we are, at the same time, confronted with our inner abyss. Philosophically speaking, we are dealing with an at least partly self-reflexive phenomenon of fear.

Being afraid of oneself is a widespread phenomenon. We know it from everyday life: we are afraid of inadvertently burping in public or of failing an exam; we see ourselves confronted with impulses, desires or habits of our own with which we partly identify ourselves and from which we partly distance ourselves. We know it from psychology and psychopathology: think, for example, of the categories of performance anxiety or of obsessive-compulsive disorders (OCD). We know it from art: think, for example, of Alice Munro’s autobiographically inspired short-story “Night” or of the whole bunch of movies dealing with a situation in which someone suffering from amnesia is confronted with a horrible crime s/he might have committed. What makes the experience I described in the beginning significant is thus not the quantity of this specific kind of experience, but rather its symbolic and existential character: the fact that it is our (descriptive and evaluative) self-conception itself that is challenged in such situations. Note, that my example inspired by Sartre’s famous description in “Being and Nothingness” thereby is partly misleading.[1] In the example, the possible consequences are disastrous. Thereby, we tend to lose sight of the fact that self-reflexive anxiety is crucially not (only) about consequences, but rather about causes and reasons of events, about the question what our (possible) reactions, behaviour, and actions might reveal about ourselves. 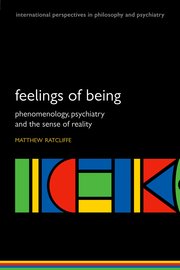 The concept of “existential feelings” was coined by Matthew Ratcliffe.

The phenomena I referred to are diverse. A philosophical analysis may help us to disambiguate them. For example, the description in the beginning contained different forms of self-reflexivity: being afraid of one’s own bodily reactions, being afraid of one’s own failure, and being afraid of one’s own weakness, ambiguity or changeability of will. Having a closer look at the different examples thereby shows that they contain different forms of self-attribution and different degrees of felt responsibility. Furthermore, we can differentiate different dimensions of “generality” that may be involved in experiences of self-reflexive anxiety: the phenomenon I described is an emotional feeling – a feeling directed at a specific situation. At the same time, it holds the potential for presenting itself as an insight into the basic structures of our existence or of human existence as such. For example, self-reflexive anxiety may confront us with the fact that the borders between ownness and otherness, activity and passivity, power and powerlessness with regard to our practical identity are blurred. Finally, the experience bears the potential for “sinking in” our affective live. It may become an “existential feeling”: a pre-intentional feeling that opens up, shapes, and limits the space of experiences, thoughts, and actions possible to us.

Ruth is always in search of inspiration and discussion, so feel free to contact her: ruth-rebecca.tietjen [at] student.uni-tuebingen.de! For a much more fine-grained analysis of the phenomenon of self-reflexive anxiety, see her thesis “Am Abgrund. Philosophische Theorie der Angst und Übung in philosophischer Freiheit“.