The Living with Feeling team met artist Aidan Moesby at the BBC Free Thinking Festival. In this guest blog he reflects on the place of emotions in his work.

‘Sagacity: The Periodic Table of Emotions’ was initiated as an arts programme exploring methods of non-medical intervention for those at risk of using the health services due to mental health issues. The project, based in Dundee, tasked itself with researching and developing methods through which mood assessment processes could be used to define and influence the mood of an entire city.

There are many software tools available that aim to support individuals to measure and define their mood and to represent this in ways that might symbolically or graphically allow better self-awareness and insight – strangely none seem to use emotions as the basis of this. Sagacity does. Indeed, emotions are at the heart of Sagacity. 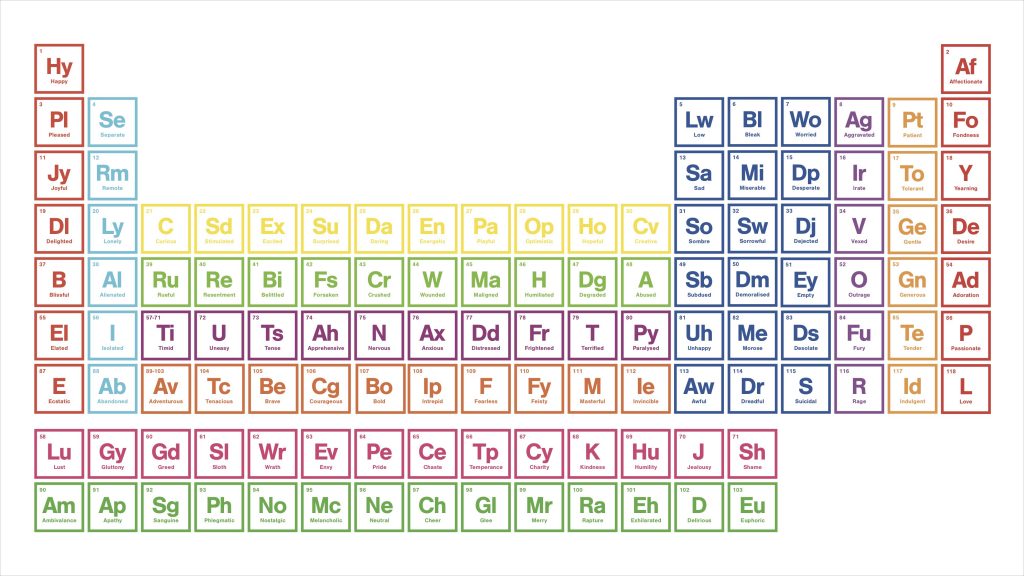 Cities can be seen to have an organic nature which is constructed from the composite interaction of individuals and environments. These interactions form a system that is constantly responding to thousands of events and actions of all scales. These may be both perceived and imperceptible, with most of them generating temporary or persistent stimuli that may enhance or depress our attitude.

All the constructed physical aspects of the city contribute to the development of this attitude with elements such as urban design having a profound effect (hard landscaping vs soft landscaping – brick walls vs flowers and parks). However not all people may feel ‘enfranchised’ by this environment – feeling as if they can influence positive change as part of a responsive action process. We commonly talk about the mood of a city – but what can we – or more specifically, I – do as an individual to improve that mood?

Most wellbeing indicators use parks and jobs and houses as metrics. I find it difficult to express how I am feeling without using an emotion. However, when asking people ‘How they are?’ most people respond as though they exist in a binary state of happy or sad, good or bad. This is not particularly effective at eliciting how someone feels nor does it acknowledge how nuanced emotions and feelings really are. Added to which we rarely, unless we are experiencing extreme mental ill-health, exist in a mono-emotional state.

The reality is we often experience conflicting emotions – we can be excited and anxious, they are not mutually exclusive. By producing a periodic table of emotions I have attempted to broaden our emotional lexicon and deepen our emotional intelligence. Using the table as a template I have grouped and weighted emotions according to emotional intensity/heaviness and colour coded according to common perceptions where possible. For instance the ‘depressive’ emotions are coloured blue and go from Low to Suicidal, similarly I have suggested Affection is lighter than Love and coloured these red.

During the research for this I had a focus group where I texted questions each day for a fortnight. These ranged from ‘on a scale of one to ten how do you feel today?’ through to ‘where do you get your support from?’, ‘How connected do you feel to the city?’ to ‘Where would Dundee take you on a date and why?’. The retention rate was amazing as was the honesty and openness of the anonymous respondents. I was amazed at what people were prepared to tell me through the anonymity of a text.

The vertical groupings are Happiness, Loneliness, Depression, Anger, Tolerance and Love. The horizontal groupings are Playful, Neurotic and Self Mastery. The additional group from Rueful to Abused reflects feelings which are responsive to something being ‘done to us’. The two bottom rows a mixture of the seven deadly sins, their opposite and the humours. The remaining emotions are ones which I thought should be represented but which did not naturally fit elsewhere.

Obviously this table and weighting of the elements is based on a personal world view to some extent. We all have varying scales on our emotional continuum. For instance, my ‘it was really good’ may be your ‘it was okay’ but we enjoyed it to the same degree we just have a different scaling and use different words to mean the same thing.

‘Sagacity: The Periodic Table of Emotions’ now exists as a digital installation which illustrates the current mood of a city, location or event through analysis of Twitter. It is a dynamic visualisation of the city ‘right now’. Sagacity captures social media texts which are geolocated or hashtag specific. A variant of it can track local newspapers and integrate this data within the overall visualisation. 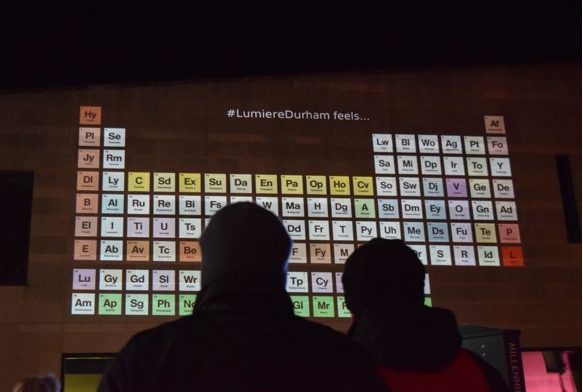 When an emotional word is tweeted by the ‘audience’ it is detected and illuminates at full intensity. Over time the illuminated element fades back to a base colour depending how many times it has been tweeted. If Excited gets tweeted and illuminates at 100% intensity it will fade back from bright yellow to a white background. However, if it has already been activated say 1000 times it will fade back to 20% intensity to reflect this. Sagacity therefore acts as a dynamic emotional barometer reflecting the mood of the city or event. The reaction time and decay times can be adjusted to reflect activity or change over a period, dependent on the rate of engagement.

Whilst Sagacity was designed for a city it has potential to be equally as suitable for individuals.

As an artist, curator and writer my work is at the intersection of the visual arts, wellbeing and, increasingly, technology. I make site or context-specific interventions which serve as a catalyst for a socially-engaged conversation and personal or communal exploration. I work extensively with mental health. Currently I am exploring the dual crises of climate change and mental health, looking at the relationships between the outer physical weather and internal psycho-emotional weather.

‘Sagacity’ marked a departure in my work of creating larger scale public artworks. Following this I created ‘Between Stillness and Storm’ with Tim Shaw which was an off-grid weather responsive installation which toured to festivals. It offered the opportunity to stop and reflect, to be present, it was my 101 on climate and wellbeing. The centrepiece was weather balloons which during the day were sculptural objects and, at night, played out the daylight brightness through installed LEDs. There were also solar-powered synthesisers and a bell tree mediated by windspeed. So, if there was no wind the bells would not chime and similarly with the sun and solar synthesisers. It highlights a direct relation to the weather, cause and effect, which is often overlooked. 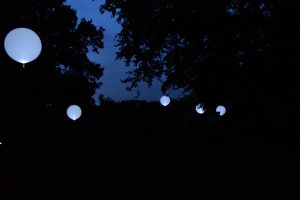 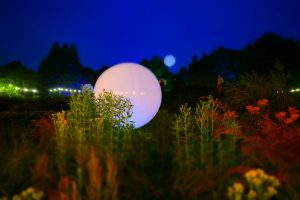 I have just finished an R&D project ‘I was Naked, Smelling of Rain’ which explores presence, absence and loneliness through the dual crises of wellbeing and climate change. I was working with a psychiatrist researching the relationship between the external physical weather and the internal psycho-emotional weather. Language and metaphor are really important in my work. We often use weather terminology to describe how we feel. We may say someone has a sunny personality, or my eyes are a bit misty, my head is a bit foggy and more explicitly in forecasting where highs and lows and depressions exist.

How are different weather systems interlinked? If we are facing a deluge in our work life does that mean we have a drought in our social, cultural or familial life? How does one person’s weather system interact with another’s? I am also concerned with how the digital connects and divides us, which again brings me back to weather metaphor and clouds – rather than having our head in ‘a’ cloud we are all under ‘The’ Cloud. Therein lies the nub of my concerns over climate change and wellbeing.

‘I was Naked, Smelling of Rain’ is being developed into a full-length performative lecture to tour. Collaboration is the basis of my practice as I continue to work on responding to climate change and wellbeing and I am interested in new collaborations in the future.