In this post for the History of Emotions Blog, Professor Thomas Dixon looks back at the life and influence of the man he has suggested was the ‘inventor of the emotions’. 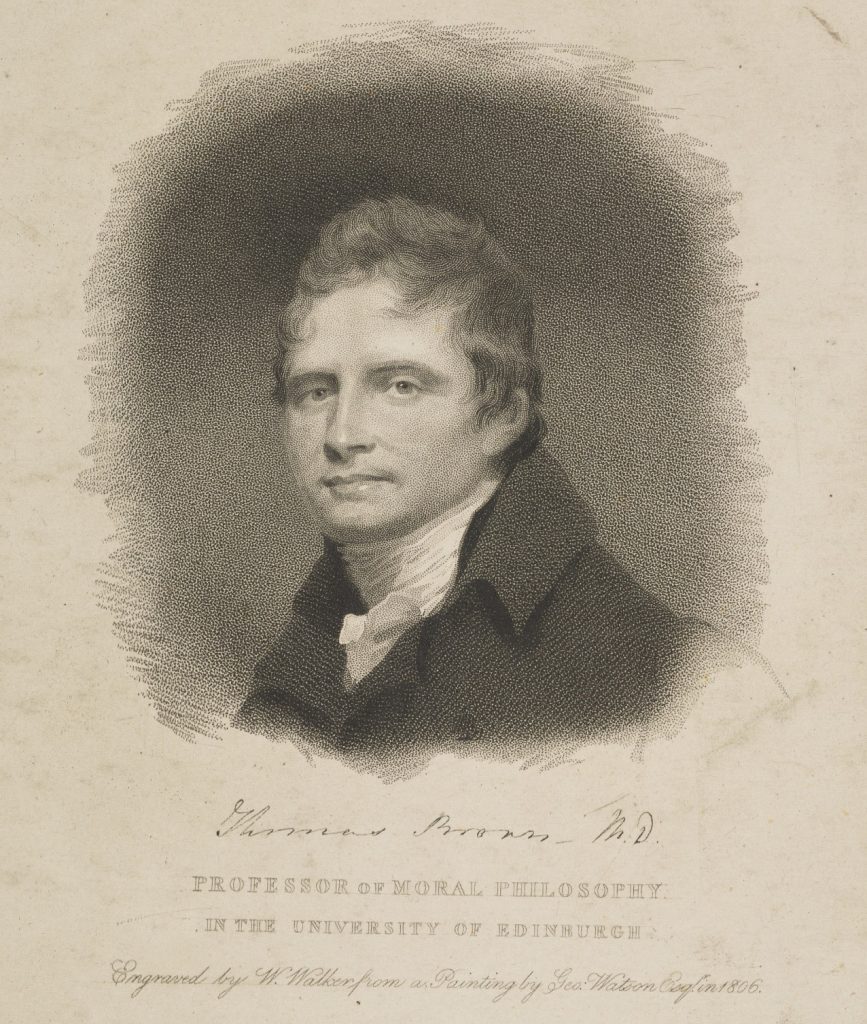 Today is the 200th anniversary of the death of the poet, physician and philosopher, Dr Thomas Brown, Professor of Moral Philosophy at the University of Edinburgh from 1810 to 1820.

Brown collapsed while lecturing in December 1819 and was sent to London by his physician for a rest and change of air. It did not have the desired effect, and he died there on 2 April 1820, at the age of only 42. The first edition of his Lectures on the Philosophy of the Human Mind was published before the end of the year, and it reached its 20th British edition by 1860.

Thomas Brown is now a little-known figure, and his grave is in disrepair, but at the time of his death, and for some decades afterwards, he was a hugely celebrated philosopher of the human mind. I first came across Brown while researching my PhD, and I found out much more about him over the following few years as I worked on a multi-volume edition of his life and works. I came to think of him as a friend, in the way that sentimental historians sometimes do when they spend too much time with their subjects. So, I didn’t want to let this 200th anniversary pass without paying a small tribute to my old friend Dr Brown.

When I was actively working on Brown, I frequently had to explain that my subject was neither the seventeenth-century English physician and man of letters, Sir Thomas Browne, author of Religio Medici, nor the Scottish physician Dr John Brown, creator of the Brunonian system of medicine, which enjoyed popularity around the same time as Thomas Brown’s Edinburgh career.’No,’ I politely seethed, ‘not that Dr Brown.’ This added to my protective feelings towards ‘my’ Dr Brown and my determination to help carve out more of a niche for him.

Dr Thomas Brown took on a major role within my PhD research because of his significance in the emergence of ‘the emotions’ as a psychological category in the nineteenth century. Indeed, I came to think of Brown as ‘the inventor of the emotions’ – the key figure responsible for the theoretical terms ‘passions’, ‘affections’, and ‘sentiments’ being gradually displaced by the psychological category that we now predominantly use to describe love, hate, jealousy, anger, joy, sorrow and so on, namely ‘the emotions’.[1]

As I put it in a short open-access article, summarising my research into the history of ‘the emotions’, for centuries, theorists have debated what should be considered the true seat of the emotions: the soul or the body; the heart or the brain. My suggestion is that the true seat of the ’emotions’ was in fact the University of Edinburgh, circa 1820. 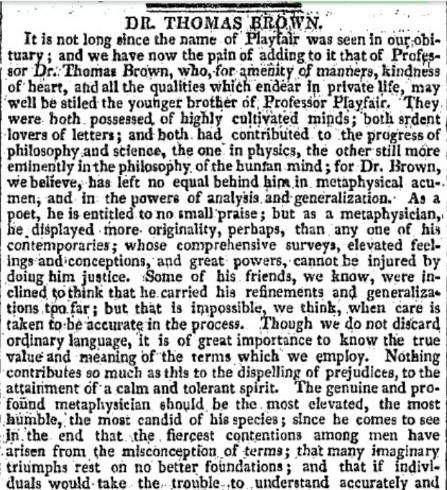 Extract from The Morning Chronicle obituary for Thomas Brown, 13 April 1820.

But leaving my own particular interests aside, what do we know about Thomas Brown? He was the poetical and intellectual youngest child in a family of 13 children born to a clergyman and his wife. Brown seems to have been an endearing, earnest, sensitive, and somewhat eccentric character. Recollections and obituaries are full of warmth and praise, along with comments on his poetical style and unusual manner. The Morning Chronicle’s obituary in April 1820 claimed that Brown had ‘left no equal behind him in metaphysical acumen’.

Brown’s Lectures were widely acknowledged to be the most successful and popular work of their kind ever to have appeared. Henry Cockburn, in his Memorials, wrote of Brown’s Lectures as one of the most ‘delightful books in the English language’. Writing at the end of the century, the British philosopher Robert Adamson wrote of the book: ‘It is no exaggeration to say that never before or since has a work on metaphysics been so popular.’[2]

What would it have been like to attend Brown’s lectures in person? Thanks to Sir Walter Scott’s son-in-law, John Gibson Lockhart, we have some idea. Lockhart included an account of a lecture by a ‘Doctor B_____’, clearly intended to be Brown, in his fictionalised portrait of Edinburgh society, Peter’s Letters to his Kinsfolk (1819). The Professor arrives ‘with a pleasant smile upon his face, arrayed in a black Geneva cloak, over a snuff-coloured coat and a buff waistcoat’ with a ‘physiognomy very expressive of mildness and quiet contemplativeness’. Brown’s elocution is ‘distinct and elegant’, his delightfully flowing metaphysics enlivened by quotations from the poets.

Thomas Carlyle also wrote about Brown, recalling him as ‘an eloquent acute little gentleman, full of enthusiasm about simple suggestions, relative, etc.’ which Carlyle found dry and uninteresting. Carlyle described the ‘immaculate Dr Brown’ as ‘a really pure, high, if rather shrill and wire-drawing kind of a man’. [3]

Brown did not marry or have children and seems to have devoted himself with quite extraordinary ardour to his work – both as a physician working alongside Dr James Gregory – then to his poetry, and finally to his role as Professor of Moral Philosophy.  His first series of lectures – a hundred of them (yes, one hundred lectures over the course of his first year in the post!) – was delivered in 1810-11. He wrote them out by hand and they totalled over half a million words. Thomas Chalmers wrote, that these lectures had been ‘gotten up with something like the speed and power of magic’.[4] Brown made further alterations to the lectures in subsequent years, while continuing to work on his treatise on cause and effect, which reached its final form in 1818.

Brown’s writings on cause and effect were an influence on John Stuart Mill, and indeed Brown has a claim to particular importance and originality as the first true proponent of the ‘regularity’ or ‘uniformity’ view of causation. In other words, when it came to causation, it was Thomas Brown and not David Hume who was really the first Humean. Among contemporary philosophers, Stathis Psillos has made a particular study of Brown as an important philosopher of causation.

Thomas Brown’s career as Professor of Moral Philosophy was cut short by illness but his legacy was still remarkable. His Lectures had an international impact and shaped several fields of philosophy and psychology. To take just one more final example, William James, when delivering his legendary Gifford Lectures on The Varieties of Religious Experience (published in 1903) in Edinburgh recalled:

The glories of the philosophic chair of this university were deeply impressed on my imagination in boyhood. Professor Fraser’s Essays in Philosophy, then just published, was the first philosophic book I ever looked into, and I well remember the awe-struck feeling I received from the account of Sir William Hamilton’s class-room therein contained. Hamilton’s own lectures were the first philosophic writings I ever forced myself to study, and after that I was immersed in Dugald Stewart and Thomas Brown. Such juvenile emotions of reverence never get outgrown and I confess that to find my humble self promoted from my native wilderness to be actually for the time an official here, and transmuted into a colleague of these illustrious names, carries with it a sense of dreamland quite as much as of reality.

Brown’s Lectures are poetical and sometimes prolix, but full of energy, clarity, and originality too. As the Cambridge polymath William Whewell wrote to a friend, while still a young man, ‘Have you read Brown’s books? They are dashing, and on some material points strongly wrong, but about cause and effect he has an admirable clearness of view and happiness of illustration.’[5]

It is now over twenty years since I first became immersed in the writings of Thomas Brown – the first Humean, the inventor of ‘the emotions’, and a dashingly poetical metaphysician – and I have not yet outgrown the ‘juvenile emotions of reverence’ I first felt towards him.

I have written at greater length about Brown in my Introduction to the 8-volume collected life and works I edited in 2003 (now a collector’s item). I rewrote that piece slightly as the Introduction to the 2010 paperback selections of his writings, still in print from Imprint Academic, and finally modified it lightly again as a chapter on the life and philosophy of Brown in Gordon Graham’s 2015 edited volume on Scottish Philosophy in the Nineteenth and Twentieth Centuries.