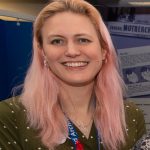 Dr Sarah Chaney is a postdoctoral research fellow on the Living With Feeling project at the Centre for the History of the Emotions, exploring the history of emotions in nursing. Her publications include Psyche on the Skin: A History of Self-Harm and articles on the idea of compassion in healthcare.

In this post, Chaney reviews Madeleine Bunting’s Labours of Love: The Crisis of Care (2020) for the History of Emotions Blog. 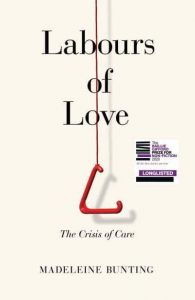 A few years ago, my partner and I were woken in the early hours of Saturday morning by a phone call. His elderly mother was in hospital and her condition had worsened overnight. How soon could we get there? Neither of us drive, so there followed several panicked hours on tubes and trains, as we worried that we wouldn’t arrive in time. Thankfully we did.

When we got to the ward, two nurses were standing in the curtained off area, hastily setting up Spotify on one of their mobile phones at her bedside.

“We didn’t want her to be alone.” One of them said. In a busy, under-staffed hospital ward, music was the best they could offer.

The efforts of these two men to care for an elderly woman they barely knew in the last few hours of her life touched me deeply. My partner’s mother had often told us she was scared of dying alone and I was grateful that the nursing staff had tried to prevent this in our absence. I was grateful for the careful way they withdrew once we were settled and the quiet efficiency with which, later, one nurse came back to rearrange the bed and allow her to pass away quite peacefully.

Despite the graceful care of these individual nurses, that morning also showed some of the cracks in the system my partner and I had become increasingly aware of during his mother’s slow decline in health. The nurses showed an awkward guilt that they were unable to sit with a dying woman; music was a poor substitute. A few days earlier, someone else had tried to discharge my partner’s mother despite her condition, desperate to free up a bed in the busy hospital. Her homecare couldn’t be restarted at such notice; dangerously low staffing levels meant that her care slots had immediately been assigned to someone else as soon as she was admitted to hospital. When we tried to pay for extra care, we were told it wasn’t available.

Madeleine Bunting’s Labours of Love sets this “crisis of care” (as she herself calls it) in political, social and historical context. Care has long been invisible, Bunting notes. This holds for both the skills and knowledge of the care workforce, as well as the vast numbers of unpaid carers, most often women, who provide a necessary service – and economic saving – to society but are rarely recognised for doing so. In the modern era, Bunting claims, a new crisis of care has erupted from increasing life expectancy and the prevalence of long-term health conditions.

Labours of Love primarily blames a capitalist system for creating this crisis. “Capitalism was built on ignoring and marginalizing the care work of women,” Bunting states in the first chapter, which briefly outlines the history of care (p. 23). She notes that economists in the late eighteenth century saw only men as independent economic agents; women and children were dependents, not contributors to the economy in their own right. It would have been interesting to examine whether this was the case in the pre-industrial era. Was care more visible and better recognised when the home lay at the centre of work and economic life for most households? As Mark Hailwood and Jane Whittle have recently argued, the different structure of society in the early modern era allowed some women to participate in all main areas of the economy. Exploring this historical shift might have made the marginalising of care during the nineteenth and twentieth centuries perhaps seem less inevitable.

Yet Bunting is right to emphasise the centrality of the Victorian middle class ideal of the woman as the “Angel in the House”: self-sacrificing and silently dutiful (though of course, scholars have long noted the contradictions between this ideal and the reality for many women). This ideal weighed heavily on those women who cared for family members, as well as infiltrating the profession of nursing through middle class reformers like Florence Nightingale (even today, almost 90% of nurses in the UK are women). Working-class women also became invisible in this model, despite the paid care they provided. What of the “vast army of servants”, Bunting asks, silently providing support in homes but ignored by early historians of the working class like E.P. Thompson? There have, of course, been histories of domestic service since Thompson barely mentioned it (see, for example, the work of Lucy Delap or Laura Schwartz). For most people, however, the history of domestic service is probably best characterised by Downton Abbey and not the lower middle- and upper working-class families who employed housemaids or part-time nannies. 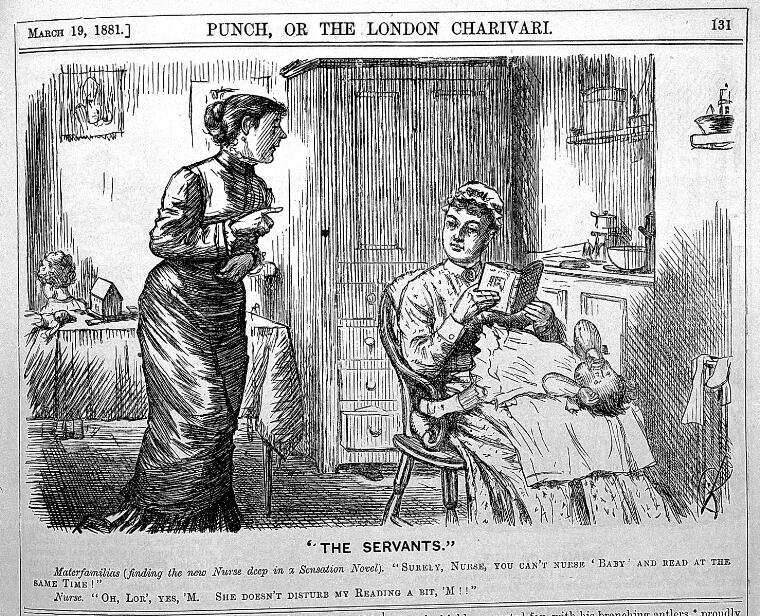 After explaining the backdrop to the modern crisis, exacerbated by the policies of UK governments from 1997 onwards, Bunting moves on to consider care in different settings. She looks at childcare and the specialist care of disabled children, care in the hospital and the GP surgery during adult life, and social and end of life care, most often for elderly people. She interviews nurses, care workers, GPs, academics, and the parents of disabled children; she shadows charity workers and home visits to patients. Across all these areas she finds the same issues in a system-wide emphasis on consumerism, business models and bureaucracy that marginalises the human relationships central to providing care, and is almost always at odds with the care that workers want to provide.

The emphasis on the words of these carers – paid and unpaid – is the real strength of this book. Take the heartfelt story of Liz, who describes the emotional impact of the absence of educational support for her autistic son, or Tony, who speaks movingly of the way a late career shift into care work impacted his life, changing him as a person and improving his relationship with his family. One point made very forcefully by interviewees, especially in the chapter on GP services, is the importance of the continuity of care: of understanding patients’ life histories and building relationships with them. In a marketized model, this relationship-building is all too easily swept away – yet, Bunting argues, it is the foundation of all forms of care. 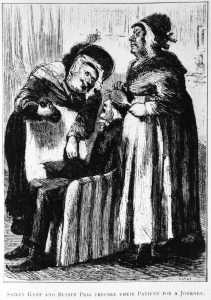 Sarah Gamp and Betsey Prig in Dickens’ Martin Chuzzlewit from The history of nursing in the British Empire by Sarah A. Tooley. Credit: Wellcome Collection. Attribution 4.0 International (CC BY 4.0)

For historians of medicine, there are occasional issues. One is Bunting’s repeated assertion that care was more important historically simply because medical knowledge was less advanced. She assumes that doctors in the nineteenth century “had little medical skill” (p. 167) and implies that the stereotype of the lazy, drunken “Sarah Gamp” nurse was a widespread reality in nursing before Nightingale’s reforms (p. 119), which has of course long been criticised by historians.[1] Her short chapters on care-related words sometimes suffer from the same lack of historicity. Others, however, highlight interesting shifts in language: the new addition of the word “care” to nursing in the post-war era (an interesting parallel to my own work on the term “compassion”) or the modern rejection of the term “pity”, widespread in earlier descriptions of care.

It’s important to remember, of course, that this book is not a history. Bunting’s skill is as a journalist, weaving history into the backdrop of a very modern problem. Beginning with the commercialisation of medicine and care by New Labour, Bunting starkly highlights the additional impact of austerity policies in 2010. Cuts have impacted disproportionately on those with disabilities and the elderly. Care workers have been forced through ever-increasing bureaucracy to focus on tasks and marginalise the relationships at the centre of care. Why do we accept this? Perhaps, until we see for ourselves the human effects of the marketisation of care – as I did in the case of my partner’s mother – we find it hard even to acknowledge these contradictions.

The crisis of care that Bunting describes has only been worsened by the coronavirus pandemic. Waiting lists for hospital treatment and social care have lengthened. At a recent online event I attended at the Royal College of Nursing on the impacts of the pandemic, one nurse mentioned the huge backlog in dementia diagnosis: someone’s condition might be declining daily, but they remain unable to access much-needed support. This gap is replicated across many other areas of care.

Bunting, writing a short foreword to Labours of Love as the pandemic broke, seemed optimistic. Has Covid-19 finally made the crisis in care visible, she asked? Has it made us appreciate and value care workers as we never have before? For a while, when the shortage of equipment and trained staff was all over the news, perhaps it did. Yet already, it seems, the lessons we learned in 2020 are receding. As I write this blog, a paltry 1% pay rise has been proposed for NHS staff in 2021, to the fury of trade unions and professional bodies alike.

Bunting’s book, it seems, is just as relevant and necessary as we start to move out of the pandemic as it was before it began: the arguments she makes need to be heard more than ever.

[1] See, for example, Siobhan Nelson, Say Little, Do Much: Nursing, Nuns and Hospitals in the Nineteenth Century, (2001) and the current work of Erin Spinney and Alannah Tomkins.