On the 27th of May (ie this Friday), the Centre has a one-day conference on music, medicine and emotions. Details here.)

What’s the point of music? Evolutionary psychologists have come up with various answers – Steven Pinker famously declared music was like cheesecake – ultimately pointless, an evolutionary side-effect or spandrel of other functional aspects of consciousness. Others have suggested the ‘function’ of music is sexual display and courtship, language learning and maternal bonding, collective identity or well-being and emotional healing. The answer is it’s all these things – music is whatever we want it to be. There may be times when music saves our life, and other times when it’s just cheesecake.

I’m in the middle of a trip through the Mississippi Delta to listen to and think about music and its connection to modern spirituality. It’s a research trip but for some reason I’m paying for it myself – it seems too much fun to be funded. I started in Nashville, drove to Memphis and am now heading down Highway 61, through the cradle of the Civil War, to New Orleans. I’ve visited the Grand Ole Opry (home to America’s oldest radio programme and the showcase of country music), the Country Hall of Fame, Studio B in Nashville, Sun and Stax Studios in Memphis, I’ve seen the pilgrims cry at Elvis’ grave in Graceland, I’ve heard the blues on Beale Street, I’ve even seen Reverend Al Green preach at the Full Gospel Tabernacle Church (he sang like an angel and then gave the most homophobic speech I’ve ever heard in public). Next stop New Orleans.

This area, still often poor and downtrodden, was the Silicon Valley of the 1930s to 60s. It was the site of the most intense cultural innovation, giving us the cultural technologies of gospel, blues, country, bluegrass, rock & roll and soul music, and creating the engine which drove the counter-cultural revolution (my travelling companion, Joseph Drury of Villanova, has a book coming out soon on the novel and technology, which gave me this idea of music as a cultural technology).. But what’s the precise function of the technology? As BB King puts it: ‘Everybody ask me, why I sing the blues’. Exactly, BB. Why?

You can see lots of reasons. Certainly one reason is sexual display – think of Muddy Waters’ Hoochie Coochie Man or Mannish Boy. But another reason is courtship, begging, and apology for misdemeanours – think of James Brown’s Please Please Please. Another is civic identity – one of the first blues songs was  Memphis Blues by WC Handy in 1912, which was a campaign song for the election of Mayor Crump. Think also of Georgia on My Mind or Sweet Home Chicago. Songs also serve as places of ethical and social reflection – from sexual ethics (‘If lovin you is wrong, I don’t wanna be right’ is about the ethics of adultery for example) to social justice songs like The Staple Sisters’ Respect Yourself or Sly Stone’s Stand. Songs were the Spectator essays of the 1960s – places where people debated ethical behaviour in a time of rapid social change, and a lot of that debate was by female singers, demanding better treatment and better rights. 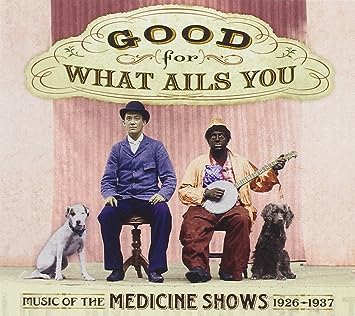 But one of the biggest reasons why people sing and dance, it seems to me, is emotional healing. These days the southern states have the highest rates of anti-depressant use in the US, but before the 1980s, there were no anti-depressants and no therapists. So if you were emotionally suffering, what were your options for emotional healing? You had the Southern comfort of food (as Professor Aziz of QMUL has found, high-fat food numbs physical and emotional pain, and no food is higher fat than Southern food), of booze, of sex, of drugs, you had the ‘miracle healing’ remedies of travelling medicine shows, you had the church, and you had music. And chief of these was music – in fact, music features as part of all these avenues to emotional healing. There’s music in the juke joint when you’re getting drunk and dancing with your girl, music in the medicine shows, music in the church, music in the soul food restaurants.

How does music heal? It helps people work – a lot of blues and gospel songs started as work songs for sharecroppers or prisoners doing back-breaking work from sunrise to sun-down. It helped them synchronize their movements, get into a trance, and feel less pain. It helps people express themselves and cut loose after work – the classic site for music in the 1920s was the porch, where sharecroppers could show their stuff on the guitar. It helps people re-assert their dignity and wholeness in a system which humiliated, abused and commodified them. As H C Speir, a record-shop owner who helped launch the careers of many blues musicians, put it: ‘the Negro for over a hundred years has been deprived of all his privileges – they could get in the field and feel more satisfied with themselves – they’re singing off something that happened to them’.

A great photo of Tina Turner by Jack Robinson

As David Byrne argued in a previous interview I did, music heals because it’s cathartic – something is within us, some grievance, some humiliation, some wrong, some mishap or a sin, and it weighs on us. And we may not be able to express it, to articulate it, to exorcise it, to shake it off. Music, because it is pre-rational, because it takes us into a sort of trance, helps to connect us to these deeper sufferings, and to shake them off, through singing and through dancing. And that helps us to ‘get happy’ as they put it in Pentecostal churches, to feel good, to feel re-connected to our deeper self. You could see it as a pressure release – that’s how Aristotle thought of it. Robert Morganfeld, the brother of Muddy Waters, says: ‘A boiler has a pop-off whenever the pressure is too high. We use blues as a pop-off for those that were depressed.’

But it’s not just hydraulic pressure release, I think. It’s also a sense of connecting to your deeper self, your soul, your connection to God. And through that, you get a vision of a better world – a lot of gospel and soul is about moving higher and making progress, like Reverend Brewster’s Move On Up A Little Higher or Curtis Mayfield’s People Get Ready. It’s about personal transcendence and social transcendence.

Of course, southern music offers different types and arenas of emotional release – there’s the church, and there’s the juke joint. There’s God’s music, and there’s the Devil’s music. But actually the church and the juke joint are subterraneously connected, and many musicians worked in both arenas – Little Richard was a Pentecostal healer as a boy, for example, supposedly blest with healing power. Then he left the church and became a profane rock & roller. But he still insisted that his music healed – he said in a Rolling Stone interview:

I believe my music is the healin’ music. Just like Oral Roberts says he’s a divine healer, I believe my music can make the blind see, the lame walk, the deaf and dumb hear and talk, because it inspires and uplifts people. I’ve had old women tell me I made them feel they were nineteen years old. It uplifts the soul, you see everybody’s movin’, they’re happy, it regenerates the heart and makes the liver quiver, the bladder spatter, the knees freeze.

Today, there are other avenues to healing – the Southern states have some of the highest uses of anti-depressants in the world. Young Southerners are less likely to go to church and more likely to meditate. But I think young people are still turning to music for emotional release – take recent two songs by Nashville residents, Taylor Swift’s Shake It Off and Justin Timberlake’s Can’t Stop the Feeling, both celebrating music’s cathartic and liberating power, or Pharrell Williams’ Happy, which is straight out of the church. And it’s interesting that the videos for Happy and Can’t Stop the Feeling both avoid the worship of the front-man. Instead, they celebrate ordinary people (or at least non-musicians) singing and dancing. In the age of the internet, music may be returning to its more participatory and democratic roots.

What the South did, I’d suggest, in that white hot Soul-icon Valley, is create a technology, or group of technologies, that helped people find release, healing and ecstasy – by which I mean a way to go beyond their ordinary ego-consciousness and feel a sense of release and connection to something bigger than them. The blues, rock & roll, soul, and country  gave us avenues to what Peter Guralnick (America’s finest music writer) calls ‘secular ecstasy’ – the ecstasy of Southern churches in secular contexts. So many of the pioneers of blues, country, rock & roll and soul came from the church and learned their ecstatic techniques in the church – Elvis, Tina Turner, BB King, the Isley Brothers, Curtis Mayfield, Sly Stone, Little Richard, Sam Cooke, Otis Redding, Aretha Franklin, and so on.

The ecstasy connects us to other people beyond our egocentric ‘buffered’ selves. It connects us to our deeper selves, the emotions that civilization requires us to repress. And it connects us to the spiritual dimension, whether you think of that as God, the Devil, or Elvis. That ‘secular ecstasy’ spread out over the world, in part thanks to white British bands like the Rolling Stones and the Beatles. The fire may have died down somewhat since then. But it’s still so important to our well-being. I honestly think the South saved our soul, at a time when Christianity was declining and the West was facing a crisis of meaning, it gave us what Bruce Springsteen called ‘a reason to believe’.