We follow the bank holiday weekend with the final two posts of Disgust Week, in which a group of scholars from a range of disciplines explore different aspects of disgust. First, a guest post by Daniel Kelly, on very recent histories of disgust. 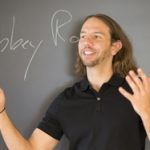 Daniel Kelly is an associate professor in the Philosophy Department at Purdue University. He is a founding member of the Moral Psychology Research Group, and his research interests are at the intersection of the philosophy of mind, cognitive science, and moral theory. He is the author of Yuck! The Nature and Moral Significance of Disgust, and has published papers on moral judgment, social norms, racial cognition, and cross-cultural diversity.

The history of disgust reflects our humanity in a range of interesting and perhaps unexpected ways. It is both universal and unique to humans, but it is composed of elements similar to those that can be found in a wide range of other animals. At the heart of the emotion are two key components with overlapping but distinct prime directives. On the one hand is what can be thought of as the poison mechanism. Its core job is to monitor what we eat, and to protect against consuming anything that is likely to, or has in our personal past, caused symptoms of what we would now call food poisoning – vomiting, nausea, getting sick specifically to our stomach. The other key component of disgust has a slightly broader mandate. Its core job is to protect against parasites and infectious diseases more generally. Disgust is thus a part of our immune system, but in contrast to, say, the battles happening at the level of bacteria and antibodies, the strategy it enacts is pre-emptive. Rather than fighting infiltrating microbes on a cellular level, disgust influences our behavior and judgment in such a way as to minimize our chances of getting infected in the first place. It pulls this off by making us sensitive to cues in the environment that typically correlate with infectious diseases, helping us to keep track of their movements and contagious influence, and generating aversion and motivation to help us steer clear of these kinds of potential threats.

This view of disgust sees it as a piece of the psychological architecture common to all humans. Moreover, since it traces its historical origins to two distinct components and adaptive problems, it is able to make sense of the clustered set of affective, cognitive, and behavioral properties that together characterize the disgust response, what happens to you when this emotion is triggered. The response typically includes the mild, nausea-like feeling one has in experiencing disgust; the familiar gaping ‘disgust face’ that automatically flashes across one’s face, and that is so easily recognized by others; as well as the more cognitive thoughts about contamination and impurity that accompany those feelings and behaviors. The dual origins account also sheds light on the types of things likely to trigger this emotional response, and on how and why people come to be disgusted by some things and not others. For example, there’s a good case that a core set of cues are innately disgusting, and that this set reflects the emotion’s two prime directives, and so contains mostly cues reliably correlated with bad food or infectious microbes: rotten fruit, spoiled meat, fetid garbage, feces, and other people who appear feverish, sneezy, or otherwise sick or disfigured in visible ways. On the other hand, the psychological system is also flexible enough to allow for a fairly large range of variation in what’s considered disgusting. This too can be traced back to the emotion’s two prime directives, together with the evolutionary trajectory our species has taken over the course of its history. 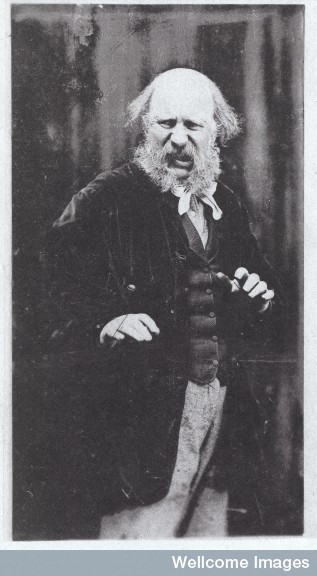 The expression of disgust, from Darwin’s ‘The Expression of the Emotions’ (1872)
Credit: Wellcome Library, London.

Humans are extremely social, are extraordinary cooperators, and groups of humans have found ways to thrive in a remarkably wide range of habitats, from the deserts to the rainforests, and from the tundra to the modern urban jungle. Our eating habits reflect and enable this; we are omnivores and generalists, and so can take advantage of the different resources and dietary options offered by these wildly differing habitats. Our disgust systems can be calibrated in several ways, thus providing several routes for eliminating what might look like promising dietary possibilities. You can learn from your own past experience and culinary mishaps, acquiring an aversion to some type of food that’s previously made you sick to your stomach. But you can also learn from others, and this emotion includes a subtle signaling apparatus that allows us to easily soak up information concerning what the people around us find disgusting, and refuse to eat. Social learning of this sort is equally important for calibrating one’s disgust to the cues indicative of the threat of infection, since such threats make up a motley collection, and do not present a uniform or universal face from one habitat to the next. Individuals can learn from their parents and peers what to be disgusted by and what the most important visible cues are to keep track of, and in doing so they attune their own defenses to the local conditions.

The upshot is that disgust has some humanly universal, innately shaped features, but it is sensitive to social influence, and thus culturally variable in many ways as well. This blend of uniformity and malleability enabled it to be recruited into additional roles, thus extending its scope beyond just protecting against poisons or parasites, and at some point in our history the influence of disgust bled into our social interactions and cooperative enterprises as well. Sociologists like Norbert Elias have seen an important role for disgust in the long, slow grind of what he called ‘the civilizing process’, marking divisions between different classes and social positions, especially as societies became more complex and the division of labor required of the populous became more pronounced. More specifically, disgust has been commended for giving a vivid kind of force to manners, etiquette, and other rules of conduct that help organize societies and coordinate complicated social interactions. Recent empirical psychological research on “moral disgust”, broadly construed, has shown how disgust does indeed animate not just table rules, but a broader subset of social norms, often called “purity norms” that can include those governing sexual propriety, ritual behavior, sacredness and sacrilege, and the proper preparation and consumption of food.

Disgust is also an emotion that helps police the boundaries between social groups, especially those that differ along class and cultural lines. In each case, the involvement of disgust colors the judgments made about the subject matter: violators of purity norms can come to seem morally tainted or spiritually impure, and the symbols of especially vilified social groups can come to seem loathsome and contaminating, with the individual members of those groups becoming the target of a dehumanizing stigma. Like the cues indicative of poisons and parasites, the relevant norms, social positions, and ingroup/outgroup boundaries vary greatly from one culture to the next. The malleability of disgust allows this piece of a person’s psychological repertoire to be socially calibrated along these “moral” dimensions as well, ensuring that she is properly enculturated as she grows up, and so becomes attuned to the important features of the normative framework that governs whatever social niche she happens to be born into.

As slick as the evolutionary/engineering solution at the heart of this dual origin, recruitment and expansion history of disgust might be, I’ve argued at length elsewhere (see also ‘Against the Yuck Factor’) that the picture it paints should be taken as a warning sign, and that today we should do our best to minimize the role we allow disgust to play in the social and moral realm. The dehumanizing stigma associated with disgust makes it too easy to demonize at risk groups of people, which in turn makes it too easy to treat them horribly, and certainly unethically. I’ve also argued that disgust should be given no weight in moral deliberation. As intuitive and powerful as the impression can be from the first person perspective, the mere fact that something, be it a behavior or practice, a meal or a person, “seems gross” to you or to anyone else is not a good reason to think that it is therefore morally bad or wrong. 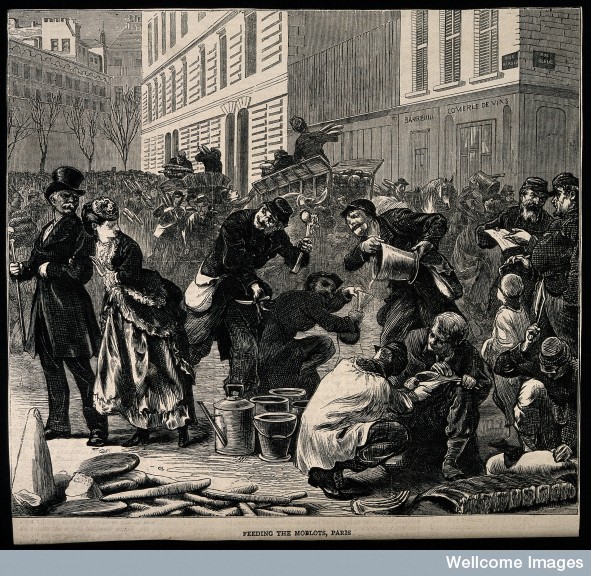 A rich couple walk away in disgust at the feeding of poor and hungry soldiers in Paris (from the Illustrated London News)
Credit: Wellcome Library, London.

Indeed, at our current moment in history, I think we have even more reason to be wary of the influence that disgust can have on our moral cognition, because we have good reason to be wary of the influence our contemporary culture can have on disgust. I mentioned above that humans are able to thrive in a remarkably wide range of habitats. This is in part because we, like other species but to an arguably much greater extent, do not passively occupy pre-fab habitats as we find them in nature, but actively shape and build the niches in which we live. These days, the network of physical and social niches that make up the urban jungles in which over 50% of humans live are radically, almost entirely constructed, and the reach of modern culture goes far beyond those cities, pumped through our unprecedentedly sophisticated communication networks. Disgust is sensitive to social influence, and social influence is now on steroids. The connected, media saturated environments in which we now live are also filled with ‘supernormal stimuli’, a range of cultural artifacts that incorporate exaggerated versions of cues designed to push different psychological buttons, and thus elicit stronger and more exaggerated versions of the response associated with each button. Cheesecake is a common example: an artificially concocted, exceedingly rich concentration of dessert type sweets that triggers intense feelings of pleasure and deliciousness. Other elements of the contemporary world – advertising, marketing, political messaging – are onto the trick, and the cultural niches in which we now live and act are absolutely filled with supernormal stimuli intentionally designed and deployed to nudge behavior, trigger different responses, push emotional buttons, and shape moral attitudes. History has always given us demagogues skilled at manipulating the passions, but in the current hyper-constructed world similar tactics have been refined and rationalized. Given the ubiquity of media and the sophistication of modern image producing technology, attention capture strategies, and narrative crafting techniques now vying for our emotion responses, the situation seems crucially different from before. Among other things, it suggests that the normative significance granted to any moral judgment accompanied by the activation of this powerful emotion needs to be thought through very carefully before it is acted upon. With all this moral cheesecake around, we should be especially suspicious of any intrusion of disgust and its dehumanizing, potentially destructive influence into our best moral thinking.