This is a guest post by Zoe Strimpel, a third-year doctoral 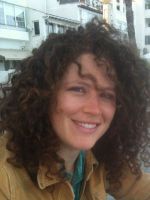 student at the University of Sussex, where she holds the Asa Briggs PhD scholarship in Modern British History. Her thesis explores the relationship between the British matchmaking industry after 1970 and changing romantic norms and gender dynamics. She has written two non-academic trade books about dating and gender: What the Hell Is He Thinking: All The Questions You Ever Asked About Men Answered (Penguin: 2010) and The Man Diet: One Woman’s Quest to End Bad Romance (Harper Collins: 2012).

Change can be confusing and frightening, particularly when it feels like control – however tenuous – is slipping away. And when people are confused, scared, or feel they’re losing their grip, they get angry. And they write angry things. In my view, hot emotions such as anger not only provide a framework for considering the affective drivers of everyday experience but they act as a flare on the horizon, alerting us to areas of sensitivity we might otherwise miss. Sore spots nudge us to think about the usual historical narratives from a different point of view.

One plum opportunity I’ve had for doing this recently concerns the reactions of a group of largely conservative single people around 1980. Men and women countrywide of different incomes and ages, the diverse feelings of these lonely hearts are accessible through the numerous letters they penned to a national solos’ magazine called (shockingly) Singles. Many were divorced – swept up in the soaring divorce figures of the 1970s, when marriage terminations tripled, the women often struggling to raise children single-handedly. But many were also in their 20s and early 30s, people who found (or felt) themselves still standing when the music stopped. The never-marrieds were hardly alone either – the number of single person households (though this includes widows and widowers) was the fastest-growing type after the 70s. 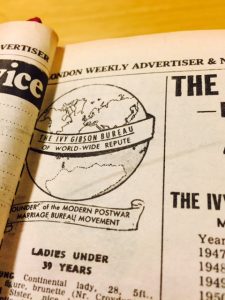 Singles reader letters are curiously, depressingly addictive – the sheer intensity of sexually acrimonious feeling kept me reading and reading. They also made me think in new ways about the legacies of the 70s. Before, I’d tended to think about the decade’s sexual progress as inexorable, while also wondering how the explosion in feminist discourse fit within the larger moral and emotional landscape of a Britain whose adults had been born in the 20s, 30s, 40s and 50s.  These letters prompted me to reckon with all those who experienced feminism on a daily basis as a source of vexation, disagreement and confusion.

When Singles was launched in 1977, readers had been what they often called ‘subjected’ to nearly a decade of sexual liberation movements. Women’s liberation had introduced a whole new vocabulary, and whether or not its ideas and goals were agreed with, there was no getting away from the fact that ‘equality’ – in the bedroom, at work, at home, in childcare – was at the heart of a growing discourse that appeared everywhere from high politics to TV to Cosmopolitan magazine. The actions and calls of feminists were a media mainstay. Nor was it all talk – as Carol Dyhouse has chronicled, the expansion of higher education saw huge take-up of university places by women in the 70s, and more women were working in a (still limited) variety of jobs. By the time Margaret Thatcher became Prime Minister, it seemed like women had gained power across the board at a break-neck speed, their rights to succeed enshrined in the Equal Pay (1970) and Sex Discrimination Acts (1975). And having been in universal circulation for over a decade, the Pill had changed the entire relationship between sex, gender and family in ways not everybody was happy with. There were raw feelings about female sexuality and motherhood, which – in Singles letters – often took the form of accusations of women’s greed, selfishness and unreality.

But among Singles readers, feelings about women’s changing economic status prompted some of the most heated exchanges. Money was a cipher for power, and the easiest way into the question of how power was being reconfigured between the sexes was often through something as seemingly trivial as who paid for what on dates. But men’s feelings about women’s economic status were complicated, hedged on one hand by the sense that women had enough money of their own now to mean they (men) no longer had to pay for dinner, but also that women had actually become more money-grubbing at the same time. The idea that women had cried equality, got it and all its trappings (eg good jobs and good incomes) and still expected men to pay for them on dates was extremely galling to many. This was a moment in which the strength of the emotional response was the flare on the horizon rather than the perception contained within it. After all, the latter had little in common with reality as most women experienced it.

Here’s an example of anger about women and money. In the November 1978 issue, bachelor Noel Shaw wrote in the lonely hearts ads at the back of the magazine. ‘It will be found that roughly one in three women include in their requirements, one or more of the three words, “business”, “professional”, and “executive”. Using your red felt-tip, mark these “grabber”, “climber”, “leech”, 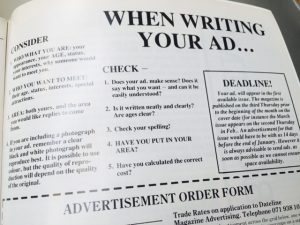 whatever takes your fancy. Also, look for those including such phrases as “financially sound”, “wealthy”, “reasonably rich”, “successful”, “solvent”, “generous” and the like. Mark these “G/Digger” or with just a plain “£” or “$” sign. …. actually there may be some justification here, if there is any truth in the rumour that some women can only achieve orgasms in a bedroom with a £20 note pasted to the ceiling’

Weaving between the insulting and the sexually explicit, this kind of invective was fairly commonplace in the letters pages of the magazine, and underscores the kind of muddled feelings about women’s changing status – and the perceived attack on male resources – I’ve been talking about. Not all men were so crude, but letter after letter from men spurned in the lonely hearts pages essentially blamed the march of women’s rights for creating ‘a new breed of female predators’ that no man would ‘even want to marry, let alone live with’.

But what about the women? They in turn found their opposites unreliable, oafish, poor and shirking of their domestic and financial responsibilities.  A Ms M.P. of Surrey’s response to Noel Shaw’s letter was particularly passionate. Defending female terminology in the lonely hearts pages, she argued that it wasn’t women who were to blame, but the reality of experience with modern men that induced women to take semantic precautions.  Indeed, her profound dissatisfaction with contemporary gender relations pivoted on an idea of a better, vanished past. She fumed: ‘“Professional’ man is stipulated in order that unwashed unshaven and part dressed yobs don’t appear for meals and also to intimate that the advertiser would like to meet a male with a wider topic of conversation than football and bars.

As the testimony of the Singles readership suggests, the feelings that many daters brought to the courtship table ­– whether they were divorced or never married – were not those of love, affection, romantic sentiment and seductive ambition. Rather, faced with their opposite numbers at the end of a decade of unprecedented sexual change, singles vented anger, frustration, resentment, economic anxiety and sexual antipathy.  Being attentive to these feelings allows us to see a fuller picture of British emotional and relational life at this time, foregrounding the widespread backlash that would become so visible in the 1980s and unfortunately, in the age of Trump, so visible once again now.