This week is #BadFeelings week on the History of Emotions Blog. We’ll be publishing a series of guest posts arising from a fascinating recent conference where a group of philosophers got to grips with the nature and significance of a range of emotions generally categorised as ‘negative’. In this first post of the week, the conference organisers, Mary Carman and Tristram Oliver-Skuse offer their preliminary thoughts on negative emotions. Mary and Tristram are members of Thumos – The Genevan Research Group on Emotions, Values and Norms, at the Swiss Centre for Affective Sciences (CISA), University of Geneva

Despite its bad rap, can anxiety in fact be good for us? How about public expression of contempt? Should we be contemptuous of Donald Trump and his orange menace and, if so, what form should our contempt take? What about embarrassment – does it in fact play an important function in our social lives, without which we would be much worse off? These were all questions touched upon in a recent conference on negative emotions at the Swiss Centre for Affective Sciences (CISA) and the University of Geneva: Negative Emotions – The Good the Bad and the Ugly. 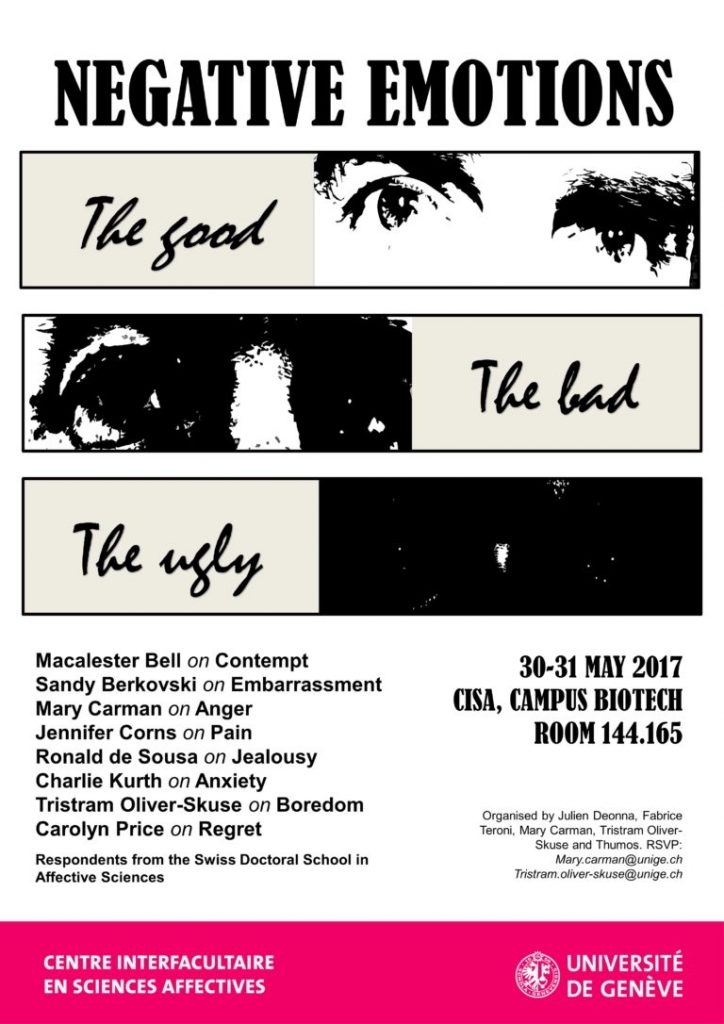 Hosted by Thumos, the Genevan Research Group on Emotions, Values and Norms, eight philosophers tackled eight different negative emotions, followed by responses from graduate students in philosophy, psychology and sociology who are members of the Swiss Doctoral School in Affective Sciences and engaged discussion from the audience.

Towards the end of the conference, various participants drew attention to the fact that little had been said about what exactly a ‘negative’ emotions is. Some assumed that it was an emotion with a negative evaluation; others that it was an unpleasant experience. What the discussions at the conference highlighted, however, was how diverse the conceptions of ‘negative emotions’ are and how easy it is to overlook the ways in which an emotion – positive or negative – can have (or lack) value, if we attempt to pigeonhole it right at the outset. In this brief overview, we highlight some of the main claims made about the eight emotions.

The conference opened with Ronald de Sousa on jealousy with a response from Frédéric Minner. By arguing against monogamy, de Sousa argued in favour of a positive form of jealousy, ‘compersion’, the positive feeling appropriate when one’s romantic partner has sexual pleasure with another. Jealousy, he argued, revolves around viewing one’s partner as a possession. We should instead embrace their autonomy, down to taking pleasure in their enactment of their own sexual desires.

Sandy Berkovski then turned the conversation to embarrassment, followed by a response from Juliette Vazard. Embarrassment, Berkovski argued, is a lot more common and important than we might otherwise think. Some philosophers see embarrassment as a mild form of shame (and you can read more posts about shame on this blog), but according to Berkovski shame has an additional normative element and, on closer inspection, isn’t as common as we often think. Embarrassment is instead a mild form of humiliation.

The afternoon of the first day focused on two closely related emotions: anger and contempt. Focusing on anger in political contexts, Mary Carman looked at extant defences of the rationality of such anger which claim that it is rational insofar as it is a justified responses to injustice, but Carman argued that these defences fail to really address the common complaint that anger is importantly irrational. Drawing on empirical work on anger in decision-making, she cashed out this complaint through highlighting negative effects on our thought processes. Not all was bad, as she ended by suggesting both that there are positive effects and that the negative can be mitigated. This was followed by a response from Fabio Mancini. 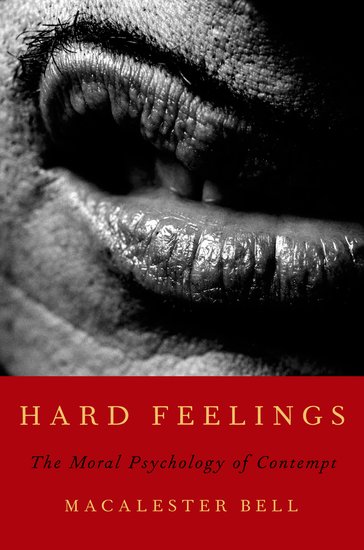 Macalester Bell then picked up the theme of contempt, expanding on arguments found in her book Hard Feelings: The Moral Psychology of Contempt. She argued that contempt was a uniquely appropriate response to superbia – the vice of unrealistically and unethically elevating oneself over others, commonly manifested in racism and bigotry. According to Bell this unjust attitude can be combatted by the contempt of those demoted by the superbia. Heidy Meriste gave a response.

Day two opened with Charlie Kurth on the cultivation and regulation of emotions, with a discussion of the unique ways in which disgust, anxiety and compassion work, with a response from Melanie Sarzano. Since these emotions work in different ways and have different degrees of inputs from biology and society, different cultivation techniques are required. The differences between the sorts of techniques required have implications for different theories about the place of emotions in a good life, or so Kurth contended.

The conference then turned to pain, with Jennifer Corns presenting her arguments towards the claim that pain is not a natural kind. By this she means that the notion of pain does not play a positive role in the best scientific practices of explanation and prediction, not that we should cease talking about pain as a result, or that it is not a real thing. Scientific theories do not use notions like Portuguese red wine to generate predictions or explanations, for instance, but that doesn’t mean there aren’t Portuguese red wines. Giada Dirupo gave a response. Pain may or may not be an emotion depending on who you ask, but as various speakers had been drawing analogies between emotional experiences and pain experiences in order to develop their arguments, a focused discussion of pain was timely and well-placed amongst the themes of the conference.

Kicking off the final afternoon session, Tristram Oliver-Skuse talked about boredom and Danny Dukes responded with interest. Oliver-Skuse suggested that boredom poses a challenge to phenomenal views of emotional intentionality. In particular, he argued that it is possible to characterise what it’s like to experience boredom without ever mentioning the object that bores us, thus creating problems for a branch of views according to which the intentionality of a mental state is given entirely by the phenomenal character.

To close the conference, we focused on regret. Carolyn Price argued that we can distinguish two types of regret: hot regret and wistful regret. The former is characterised by a desire to change the situation we regret, that is, a motivation to act on a real possibility. The latter is characterised, instead, by a mere wish to do so – an idle motivation which is unconnected from real possibilities. Maude Oullette-Dube had the final words in response.

Over the two days of the conference, we had wide-ranging discussions from an engaged, supportive yet critical audience. This week, a few of our speakers will reflect on their emotions on this blog, thereby extending the discussion of the good, the bad and the ugly of what we may call negative emotions. As we hope you shall see, these so-called negative emotions are not a simple lot. We would like to think the Swiss Doctoral School in Affective Sciences, swissuniversities and CISA for their funding and support, as well as the History of Emotions blog for giving us this opportunity to share our work more widely. But most of all, we would like to thank our speakers, respondents and all who participated in the stimulating discussions and close examination of our affective lives.

1 thought on “Negative Emotions: The good, the bad and the ugly”