Dr Riana Betzler is a philosopher of cognitive science, medicine, and biology. In this review for the History of Emotions Blog, she discusses Susan Lanzoni’s new history of empathy. 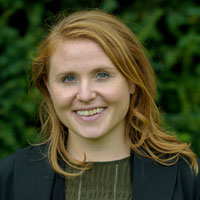 Riana’s current research focuses on social cognition and, in particular, empathy. Her research is informed by her background in cognitive science and time spent working in labs, conversing with practising scientists. She completed her PhD in the Department of History and Philosophy of Science at Cambridge. Prior to returning to Cambridge as a Teaching Associate, she spent two years as a Postdoctoral Fellow at the Konrad Lorenz Institute for Evolution and Cognition Research (KLI) in Klosterneuburg, Austria (near Vienna). 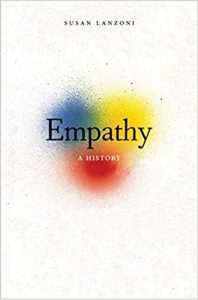 This expansive new account of the history of empathy demonstrates the ways in which the concept has been imagined and reimagined across multiple discourses over the course of about a century.

The story unfolds in roughly chronological order, showing how empathy developed from aesthetic roots, was taken up as a technical scientific term in clinical and social psychology, and then stood at the centre of political debate in the wake of World War II and during the Civil Rights Era.  Lanzoni uses thematic vignettes to elaborate on how the empathy concept was deployed for specific concerns at specific times.  For each of these vignettes, one gets the impression that there is enough material to fill a whole book.  Lanzoni identifies her approach as akin to David Armitage’s method of serial contextualism, which provides “a way of delving into significant historical moments with detail yet still holding to an expansive view” (p. 16).

The central questions that Lanzoni seeks to answer are: “How did we get here?  And can history shed light on what empathy means today?” (p. 8).  By “here,” Lanzoni seems to refer to the current state of ambiguity surrounding the meaning of “empathy”.  This ambiguity, and the sheer number of diverse definitions circulating in the field, has been widely acknowledged within the literature and is generally considered to be a problem.[1]  Definitional instability seems to threaten the prospects both for coherent interdisciplinary study of empathy and for application of the findings of empathy research to social and political problems.  Lanzoni argues that the history of empathy, however, shows that its meaning has always been ambiguous and multifaceted.  She contends that there is no one “definitive conception of empathy for all time” (p. 17) and suggests, as far as I understand, that we would be wrong to look for one definition for the present.  She “invites us to embrace many empathies” (p. 18).  This is a refreshing thesis amidst all of the hand wringing about the difficulties with defining empathy.

The book is organised into three parts: (1) Empathy as the Art of Movement; (2) Making Empathy Scientific, and (3) Empathy in Culture and Politics.  Each part is comprised of three chapters.  Lanzoni largely focuses on the development of empathy in the United States, but includes some reference to exchanges with British aestheticians, German theorists, and Viennese psychologists.

Part one identifies the roots of empathy in psychological aesthetics and the German concept of Einfühlung.  Einfühlung was originally conceptualised by Theodor Lipps and others as a way of understanding objects by projecting oneself into them.  This form of projection was thought to involve a kind of bodily resonance.  In the Anglo-American context, amateur psychologists such as Vernon Lee (Violet Paget) and her partner Kit Anstruther-Thomson, conducted experiments in the art gallery using methods of systematic introspection.[2]

At around the turn of the twentieth century, Einfühlung was translated into English.  In describing the translation process, Lanzoni highlights the disagreements about terminology occurring at the time.  For example, many theorists, including James Mark Baldwin and Charles Sanders Peirce, were convinced that psychology and the mental sciences required clearer terms.  Baldwin sought to standardise psychological terminology by creating his Dictionary of Philosophy and Psychology.  He did not, however, agree with the use of the term “empathy” as a translation for Einfühlung and instead put forward the term “semblance.”  Lanzoni effectively conveys here how terminological disagreements often reflected differences of opinion about the underlying concept and its scope.  Eventually, “empathy” won out as the term of choice but disagreement about its particular meaning persisted.  The aesthetic meaning of the term empathy continued to be dominant, but Lanzoni indicates that it started to move into the interpersonal domain through association with the extroverted personality type.

Part two is about making empathy scientific.  Lanzoni begins by explaining how empathy related to psychiatric diagnosis.  She focuses on the neuropathologist E. Ernest Southard’s development of an “empathic index.”  Interestingly, this scale was supposed to capture the psychiatrist’s ability to imagine behaving as the patient did; if the psychiatrist could not imagine behaving in such a way—if the patient’s behaviour was too outlandish—the patient was thought to be “beyond empathy” and likely to be suffering from schizophrenia (p. 10).  This represents a fascinating reversal from later empathy scales, which are supposed to measure the patient’s ability to empathize.[3]  Some scholars, including William James, expressed scepticism about the validity of this form of diagnosis by projection; the worry was that it committed the psychological fallacy, or made the false assumption that one’s psychological responses were identical to the ones being investigated.  Empathy also continued to be associated with the extroverted personality type, manifesting in the idea that schizophrenia was an extreme form of introversion; this suggests that people with schizophrenia were perhaps viewed as both beyond the clinician’s empathy and lacking in empathy themselves.

At this point, Lanzoni identifies a shift in empathy.  It was no longer conceptualized as involving the transfer of one’s feelings into another individual or object but instead required flexibility and control.  This idea of empathy as involving controlled identification carries into Lanzoni’s discussion of empathy in social work and psychotherapy, which centres on the work of Jessie Taft, Otto Rank, and Carl Rogers.  Interestingly, emotions enter more clearly into the picture at this point as well.  Jessie Taft, for example, viewed emotion as a valuable conduit to others.  Empathic identification during this period was seen as requiring serious training—training that was thought to be especially difficult for men with medical expertise.  Lanzoni demonstrates how the relational psychotherapeutic tradition therefore broke from both psychoanalysis and medicalized psychiatry.  She then turns to the development of measures of empathy by Rosalind Dymond Cartwright and others[4].  The issue of standardization again comes to the fore here.  Alongside a desire for rigorous scientific testing, there were significant worries about validity.  Were the various empathy scales measuring the same thing?  Were they really measuring empathy or projection?[5]  Similar kinds of concerns come up in the contemporary literature.[6] 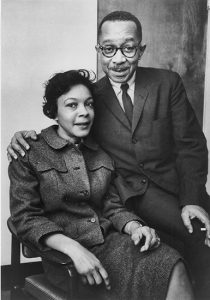 Part three concerns popular and political empathy.  Lanzoni discusses how empathy entered into everyday discourse after World War II.  This was partially a result of the popularization of psychology but also had to do with a desire for better social connections and interpersonal relations.  Empathy was seen as universalizing—highlighting the commonality among diverse individuals.  During this period of popularization, empathy was used for a dizzying array of purposes ranging from cultivating family bonds to developing advertising campaigns.  Empathy was also a subject of intense interest among social scientists and was seen as a crucial aspect of political engagement after World War II.  Lanzoni focuses on the work of Kenneth Clark, a civil rights activist who alongside the psychologist Gordon Allport, championed empathy as a way of overcoming racial division.  Clark and Allport worked to develop educational programs that were meant to cultivate empathy through roll playing and practice.  These educational programs were deployed, for example, in workshops with police officers.  By this point, empathy was seen as going hand in hand with justice and functioned as an aspirational value.

Finally, Lanzoni brings us into the present with a well-informed history of the brain science on empathy, starting with mirror neurons and then delving into the field of social neuroscience.  She argues that these neuroscientific studies provide a nuanced picture of empathy as involving both emotional identification and modulation through reason.  She also highlights the ways in which these neuroscientific findings hinge on “the capacity to describe, to illuminate, and to think through the meanings of empathy, a task that has occupied a diverse array of scholars over the past hundred years” (p. 275).  In this way, the neuroscientific literature cannot be seen as providing a more objective view of empathy, detached from the history of diverse conceptualization.

Lanzoni’s discussion of the neuroscientific literature also provides fodder for critique of the current anti-empathy trend.  This trend is exemplified by the work of Paul Bloom and Jesse Prinz, who are especially concerned with the relationship between empathy and morality.  Prinz argues that empathy is not necessary for morality and although he does not rule out its value altogether, he expresses scepticism about its benefits.[7]  Bloom goes further and argues that empathy is detrimental because it spotlights individuals in biased and parochial ways.[8]  According to Bloom, “From a moral standpoint, we’re better off without it”.[9]  Both Prinz and Bloom embrace definitions of empathy that focus purely on emotional sharing.  According to Prinz “empathy is a kind of vicarious emotion; it’s feeling what one takes another person to be feeling”.[10]  Bloom writes: “The notion of empathy that I’m most interested in is the act of feeling what you believe other people feel—experiencing what they experience”.[11]  Circumscribing empathy in a way that makes it purely emotional enables both Prinz and Bloom to highlight the ways in which unbridled empathy goes wrong.  On Lanzoni’s view, on the other hand, empathy is inherently multifaceted and encompasses elements of both emotion and reason.  It is therefore impossible to be simply for or against it; identifying its merits and pitfalls will require a sophisticated, detailed, and contextualized approach.

Lanzoni’s book provides a comprehensive and engaging account of the shifts in the meanings of “empathy”.  It brings out a number of themes that have been present throughout the history of empathy and that continue to be debated today—including the problem of projection, issues about objectivity, and the relationship between popular and scientific concepts.  There are, of course, some things that are left out.  For example, although the terms “sympathy” and “compassion” come up occasionally, Lanzoni does not explicitly delve into the immense disagreement, tension, and confusion that surrounds their definition and differentiation from “empathy.”  She also largely leaves out the debate about empathy as the root of the moral sense—a view that is grounded in the tradition of British sentimentalists such as Hume and Smith (who used the term “sympathy”) but has been revived in contemporary moral psychology.  While I can see how leaving these areas of discussion out lends the book greater focus, I was also surprised to see them downplayed.  The moral dimension of empathy in particular runs through some of Lanzoni’s vignettes—especially the ones about empathy in psychiatry and empathy in public discourse—and could have been more explicitly highlighted.

Overall, Lanzoni puts forward a view of empathy as flexible and skilful.  What history tells us, according to her view, is that empathy “comprises a complex, artful but also effortful practice that enrols feeling, intellect, and imagination” (p. 280).  Lanzoni convincingly shows how the complexity and multifaceted nature of empathy constitutes both its mystery and its promise.  Here we can also see how Lanzoni’s book, comprehensive as it is, leaves open space for further discussion.  What kind of normative import does this flexible and skilful form of empathy have?  Does this vary depending on context?  And is there anything still left at stake in continued disagreement about the value of empathy as opposed to sympathy or compassion?

[1] See e.g., Coplan, A. (2011). Understanding Empathy: Its Features and Effects. In A. Coplan & P. Goldie (eds.), Empathy: Philosophical and Psychological Perspectives (pp. 3-18). Oxford: Oxford University Press. Similar worries can be found at the start of many articles on empathy in psychology.

[2] For more on Vernon Lee and the tradition of empathy in aesthetics, see: Burdett, C. (2011). ‘The subjective inside us can turn into the objective outside’: Vernon Lee’s Psychological Aesthetics. 19: Interdisciplinary Studies in the Long Nineteenth Century, 12.