Dr Daniel McCann is Simon and June Li Fellow in English Literature at Lincoln College, University of Oxford. In this post for the History of Emotions Blog, he discusses the connection between reading and healing, the subject of his new book Soul Health: Therapeutic Reading in Later Medieval England, (University of Wales Press, 2018). 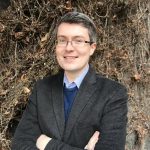 McCann’s current research covers the later medieval period and is concerned with the interconnection and interplay between medical and religious texts. He is especially interested in how texts can evoke emotional responses, belief, doubt, and indeed other complex mental states through their form and style. He was awarded a Leverhulme Early Career Fellowship in 2012 and has published a number of articles that explore the relationship between emotion and healing, reading and healing, and medieval grammar and prayer.

The connection between reading and healing has a history far deeper, and far darker, than modern “bibliotherapeutics” would lead us to believe. While you don’t have to look far to find accounts of ‘consoling fictions” offering mental and physical health, looking a little further into the past reveals something quite different. For the medieval period, reading had a strong medicinal potential that was believed to treat the very soul of the reader through the powerful emotions it could evoke. This was part of a wider medical model going back to classical times: the Galenic framework of the “res non-naturales”, or non-natural things, stated that the regulation of the emotions was key to maintaining humoral balance and so health. In particular, activities that could evoke moderate joy – or gaudium – were seen as beneficial in the regimental care of the self. Reading bawdy verses about lusty monks (for example) could provoke a salutary laugh – which was sometimes called hilaritas. And yet, while reading for pleasure and joy was recommended, the vast majority of texts in the Middle Ages were anything but joyful. Though Chaucer can provoke a laugh, we have to remember that the medieval “best-sellers” were those pious texts dealing with Christ’s suffering, torture, and death. The emotional tones and hues of such texts are vastly more complex, manifold, and difficult than simple joy. Moreover, they circulate in manuscripts that often extol their medical potential. For instance, the enormous Vernon manuscript (c.1390s) states from its opening that reading it provides “soul-hele” – soul health. It’s full of texts which, through their sophistication and beauty, set out to evoke sorrow, fear, compassion, and a host of other emotional states that are worlds apart from joy. This begs an important question of such reading material: how can emotions, widely understood to be dangerous, operate therapeutically? 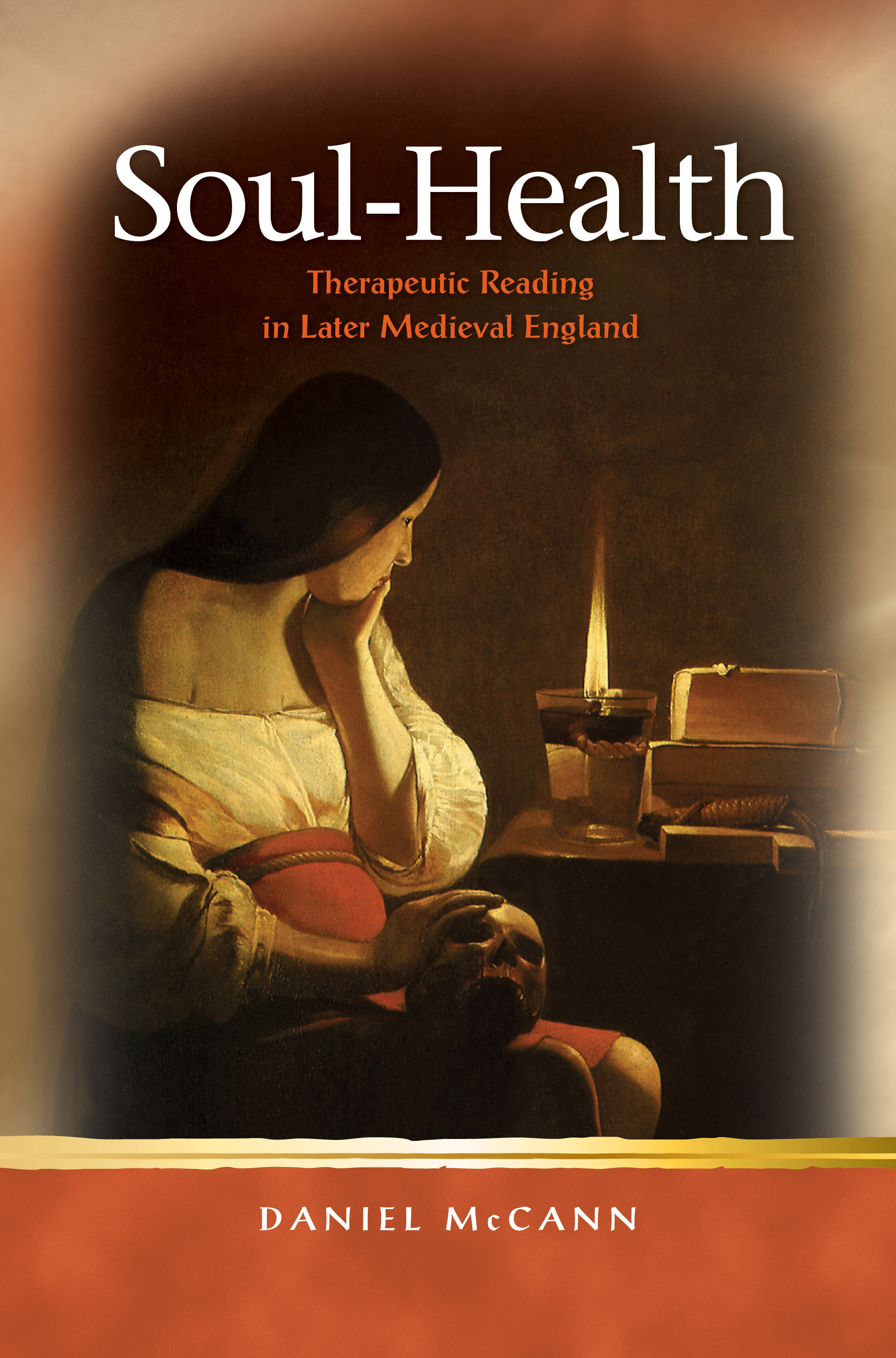 It’s a question I wanted to answer in my first book, available to buy now. What I discovered is that the medieval monastic culture that produces such potent religious texts was not medically ignorant. From its earliest stages, and most clearly after the Benedictine reform, monastic culture had a keen interest in maintaining the health of the monks. Moreover, many medical texts – from medical compendia to vernacular herbals – were associated with, produced by, or at least held in, monastic libraries. To assert that dangerous emotions generated through reading are medicinal is not a mistake born of ignorance. It is instead a deliberate recommendation that comes from a complex understanding of the state of the soul, the nature of sin, and the potential use of the soul’s affective powers. Emotions can be medicines precisely because they can also be diseases. As key thinkers from the period – such as John of la Rochelle – note, emotions are not positive or negative in and of themselves. It all depends on the object of the emotions, and the level of their intensity. It’s a bit of a hackneyed commonplace to assert that the medieval period saw sin and sickness as the same thing – but it is an accurate one. Sin, the soul’s chief sickness, is essentially an emotional problem. As Walter Hilton, an influential medieval English spiritual writer, notes, sin is

not ellis but a fals mysrulid love of a man to himsilf. Oute of this love, as Seynt Austen seith, spryngeth alle manere of synne deedli and venial

nothing else but a false, ungoverned love of a man unto himself. Out of this love, as St Augustine says, springs all manner of sin deadly and venial.

Love, when not properly directed or controlled, corrupts and festers. Here it is seen as the shared origin of all sin, and Hilton is recapitulating earlier monastic explorations into the precise nature of vices and virtues. Of course, such an emotional illness requires an equally emotional medicine:

Be contrition we arn made clene, be compassion we arn made redy and be trew longyng to God we arn made worthy. Thes arn iii menys, as I understond, wherby that al soulis come to hevyn . . . for be these medycines behovyth that every soule be helyd.

By contrition we are made clean, by compassion we are made ready, and by true longing to God we are made worthy. These are three means, as I understand, whereby all souls come to heaven…for they are medicines by which every soul is healed.

With customary clarity, Julian of Norwich asserts that the best treatment is a medicine of extremes, not of moderation. Contrition, compassion and longing are some of the most central emotional states of religious life, but they are also some of its most intense. There is no sense of balance to the emotions here, only their increasing potency and force. There is, however, a sense of order. This treatment is programmatic, moving from one emotion to another, from one medicine to another. My book takes Julian’s comments here as a starting point, and over the course of its chapters it explores the medicinal emotions that can heal the soul of sin. Fear, penance, compassion, and longing are the core ones. But as I soon discovered, the texts themselves understand emotions as fluid and layered, with each text seeking to evoke multiple emotions within the souls of its readers. For instance, compassion is not an emotion, but rather an emotional aggregate or complex. So too that last medicine she mentions, longing, is in effect a blend of contrasting and powerful emotional states. It is so intense that it will be painful, will contain as much fear of God and sorrow for sin as it does compassion and ardent love for the divine. The focus of the book is always on the texts of the Vernon manuscript, and how they work to promote the health of the soul. To do this requires moving beyond contemporary notions of “affective scripts” to look at language in more detail. In my book, I explore medieval grammar theory to understand precisely how words evoke emotions. It is the interjection (a cry or exclamation) which was believed to signify per modum affectus (in the mode of affect), and many texts use interjections with skill and precision to evoke specific emotions. For instance, the rhythmical prose text A Talking of the Love of God, makes careful use of interjections to try and evoke that complex longing for God in the reader:

A derworþe lord what schal I nou dou. nou mai I liue no more for serwe and forsore, now my dere lemmon schal vnderfonge deþ. nou mai I Murne strongley, nou mai I wepe bitterli nou mai I syke sore & serwen euer more. A now me leden him forþ to mount of caluarie, to þe qualstouwe to don him þere o dawe. A my deore lemmon, he bereþ þe Roode tre on his bare scholdre for þe loue of me. his bodi is so tendre, his bones longe and lene, al stoupynde he goþ þat del hit is to seone. A Mi swete lemmon, þe duntes þat þei smyte þe, þe serwe þat þei don þe.

Ah! Dear worthy Lord what shall I now do? Now may I live no more for sorrow and grief, now my dear darling shall undergo death, now may I mourn strongly, now may I weep bitterly, now may I sigh sorely and lament ever more. Ah! Now (me/they) lead Him away to Mount Calvary, to the place of execution to kill Him. Ah! My dear love, He bears the cross on His bare shoulder for the love of me. His body is so tender, his bones long and lean, all stopping He goes so that a pity it is to see. Ah! My sweet darling, the blows that they smite thee with, the sorrow that they do to you.

Unlike prior passages in the text, this one begins with the impassioned interjectional cry to Jesus – that “Ah”. This emotional cry sets a tone for the rest of the passage, carefully sustained through repetition and additional interjections. Initially, the urgency and force of the opening question ‘what schal I nou dou’, is sustained through subsequent clauses by the repetition of its immediate answer ‘nou mai I’. Through this repetition, each clause is connected back to that forceful opening in a manner that directly recalls its emotive energy. The reader is thus constantly brought back to that cry throughout the whole section, its force and potency endowing each clause and each detail with added emphasis. Additional interjections break up the passage into dominant sense units and mark progress in the narrative, but they all work in the same manner to express and evoke raw emotion. The result is that each stage in Christ’s crucifixion is marked not by detail but rather by the emotive reaction to it. The whole passage thus plays with ideas of action and reaction. Until this moment all events in Christ’s Passion have occurred in the distant past, but now the present tense is used exclusively: the past of Calvary merges with the moment of narration, and by extension the moment of reading. Such reading was understood as emotionally evocative – producing passions in precise ways to help move the soul closer to a state of health – of salus. It is a medicine of extremes, and of extreme words at that, but as the Vernon manuscript shows, and as my book seeks to prove, the best medicines are always the bitterest.