As Ross MacFarlane wrote in a previous blog post, by looking closely at collections of amulets and charms that formerly belonged to Londoners, we can view different emotions imbued in and even inscribed upon these objects.

MacFarlane was talking about the collections of folklorist Edward Lovett, gathered in the early twentieth century. However, as part of the Festival of Communities at Queen Mary University of London, organised by the Centre for Public Engagement, we began collecting emotional talismans owned by today’s Londoners. The Centre for the History of the Emotions hosted a Carnival of Lost Emotions, a circus-themed tent that included the ever-popular Lost Emotions Machine, Emotional Body Portraits (a family art workshop) and an Emotional Talismans display. 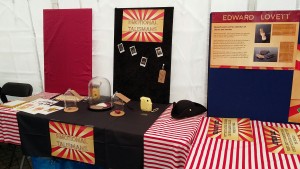 Emotional Talismans was a new activity, although the idea draws on previous Centre projects such as Jane Mackelworth’s Love in Objects. A museum style display connected emotionally resonant objects to research from the Centre. For example, Emma Sutton displayed a matchbox car, noting that ‘When I returned to work I felt anxious about leaving my one-year-old son at nursery. For several months I carried around one of his toy cars in my coat pocket, because it gave me comfort and helped me feel connected to him.’ The object also connects to Sutton’s research into the rise of the psychologist parent, raising interesting questions about the emotional connections we have to our research as historians, as well as the way research interacts with daily life. Tiffany Watt Smith explains of the ink blots she contributed that:

It’s not exactly a talisman, but I never leave the house without a notebook and a handful of pens shoved into my bag. And invariably – because I do not seem to be able to keep or use a pencil case – the ink leaks onto the notebook or into the bag lining.

Recently, as part of my research on mirroring and imitation, I’ve got interested in Rorschach’s ink blots. He wasn’t only interested in what people might ‘read’ into his famous inkblots. He also was fascinated by the fact that some of his subjects performed involuntary physical gestures and movements when asked to describe what they saw. Rorschach called these movements the ‘M-Response’, and believed that some people were more inclined to experience the world through this mirrored movements, or what he called ‘kinaesthetic perception’. Perhaps, if you’ve time, have a look at this ink blot, and see if you notice your own body twitch or move.

The idea of connection was strong among the talismans connected on the day, which were photographed and added to a display board. Major themes emerging were safety (objects making a person feel safe and protected), and connection to loved ones. Often these two themes were linked. One young woman had her necklace photographed: a metal disc inscribed with verses from the Qur’an, which relate to protecting the individual. Her family all wear the same necklace every day, so she knows she always has this link to them even when she is a long way away. Other objects evoked memories of happy times – such as a souvenir pressed penny collected on an outing with one participant’s nephew, which now makes her think of him.

As with Lovett’s collection, objects themselves became imbued with a kind of magic for their wearers, sometimes beyond the context in which this protection was initially formed. One man described how he still kept a Catholic medal from his childhood, which his mother had told him would protect him. He no longer believed in the doctrine with which the medal was associated, but still felt that the medal could keep him 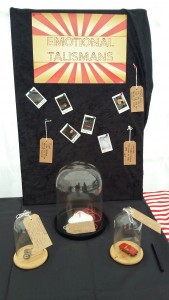 safe, even though aware of the contradiction. Other people spoke of their objects as ‘reminders’. One woman described how her mother-of-pearl necklace was well liked by people she met, instigating a friendly encounter. Because of this, when she put it on in the morning she saw it as a ‘reminder to be kind’.

Interestingly, unlike with Lovett’s collection and, seemingly, other hidden supernatural objects such as those uncovered in Concealed Revealed, most talismans were not associated with either luck or health. Instead, emotional connections to these items were key. Of course, this small sample might not be representative of the objects people more generally have collected and kept, and interactions on the day were also influenced by the context of the display, which focused on the history of emotions. However, it does appear that there is some evidence of a shift which might raise some interesting questions for further investigation into emotional objects. When did Londoners move from keeping the charms for luck collected by Lovett in the early 1900s to emotional talismans carried by many today? Does the meaning given to an object differ by age group, race or religious background? And what does this suggest more generally about the changing dynamics of western society?