This is a guest post by Emelia Quinn and the third in this week’s ‘Romantic Voices’ series. Emelia is a Wolfson Foundation DPhil student in the English Faculty at the University of Oxford. Her thesis aims to both establish a ‘vegan’ mode of reading texts, and trace a cross-period vegan literary canon, from 1818 to present. Emelia will be giving a paper based on the material discussed in this blog post at the British Association for Romantic Studies’ conference taking place 22-23 June in Oxford.

Despite a remarkable, and welcome, growth of animal studies criticism in the humanities across the last few decades, there has seemed to be a marked reluctance to critically engage with the term “vegan.”

However, whilst initial assumptions might suggest that there has been little scholarly work produced on veganism until relatively recently, the emerging field of “vegan theory” does have a wide array of overlap, and takes a significant amount of influence from work across ecofeminism, ecocriticism, postcolonialism, posthumanism, deconstruction, and queer theory. The publication of Laura Wright’s The Vegan Studies Project last year, synthesising many of these interdisciplinary connections, alongside the growing sense of veganism’s urgent relevance to current ethical and environmental debates outside of the academy, seems to signal the contemporary period as a seminal moment in the emergence of veganism as a significant field of critical enquiry and study.

On the 31st May 2016, my colleague, Ben Westwood, and I organised the Towards a Vegan Theory conference at the University of Oxford. Showcasing speakers from across multiple continents and disciplines, including literature, history, history of art, sociology, anthropology, and psychology, the success of the event appeared to confirm veganism’s increasing prominence within the academy. Across such a wide berth of disciplines, the recurrence of the theme of failure, from failed witness to failed writing practices, came to bear on an equally palpable emphasis on personal stories, visceral responses, emotions and crying. Establishing veganism then, as both an identity and practice engaged with human oppression and consumption of the nonhuman, as an academic practice, appears to directly question how we might reconcile the seeming antagonism between emotions and rigorous scholarship.

In this blog post, I’m going to briefly discuss my current work, establishing Mary Shelley’s Frankenstein as a key text for the study of vegan literature and historically situating it within the emerging vegetarian ideals of the Romantic period. As I prepare for the BARS Romantic Voices conference at the end of June, I have been considering what a vegan mode of reading texts, or an analysis of vegan structures of feeling, might have to contribute to Romantic scholarship.

The relation between new scientific knowledge and the abuse of nonhuman animals through practices such as vivisection and meat-eating gave rise to poignant debates increasingly brought to the literary fore in the post-Revolution ideals of the Romantic period. The adoption of vegetarian diets, towards the end of the eighteenth-century, was often associated with the radical principles of the French Revolution and the potential to transform and defamiliarise what had previously appeared to be divinely ordained. Mass social change and the industrial revolution, increasing the distance between the urban population and nonhuman animals, as well as the influence of Hinduism and the translation of ancient Brahmin texts, on soldiers and imperialists returning from India, also appears to have played a part in an increasing body of radical vegetarian discourse. For example, the polemical writings of John Oswald, Joseph Ritson, and Percy Bysshe Shelley, contributed to a rich body of vegetarian and vegan literature in the period, variously promoting its medical, environmental, social and moral benefits. 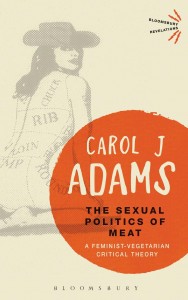 Carol J. Adams’ seminal The Sexual Politics of Meat was one of the first works to draw on this history in order to expose the striking blind spot in critical evaluations of Frankenstein, which fail to comment on the creature’s meat-free diet. She notes the narrative’s allegiance with lapsarian Romantic discourses which “uncoded all tales of the primeval fall with the interpretation that they were implicitly about the introduction of meat eating” (Adams 112). Indeed, there are clear intertextual allusions that validate the influence of contemporaneous vegetarian tracts on Shelley’s novel. For example, Oswald’s 1791 The Cry of Nature posits scientific ambitions as a male endeavour, with his address to the “sons” of modern science expressing a patriarchal heritage held in contrast to the feminine pronouns attached to the abstract notions of wisdom and nature (n.p). Further, this masculine gendered science is seen to violently attack and rupture the “maternal” aspect of nature, an element much discussed in scholarship regarding Victor’s usurpation of the female role in creating life. Oswald’s polemic also critiques the idea that humans are by nature carnivorous, attacking those who use such contested arguments as justification for the cruelty inflicted by practices such as vivisection. As Adams notes, the creature’s composition from the herbivorous animal remains of the slaughterhouse allows Shelley to “circumven[t] the anatomical argument that vegetarians of this time found compelling and their critics ludicrous” (117) in order to renegotiate relations to the body. 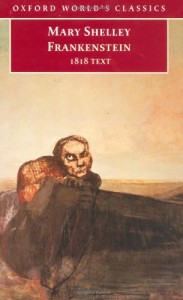 I suggest that Frankenstein’s hybrid creature, through his composition from slaughterhouse remains, forces a confrontation with the monstrous realities of the contemporaneous meat industry and blurs the boundaries between the human and nonhuman. It thus seems as important to uncover the neglected cultural history of Romantic veganism, embedded within philosophical traditions and emerging ethical questions about ‘the animal’, as it is to trace the literary representation of veganism as a site of anxiety and radical difference. In particular, it seems productive to examine how this speaks to contemporary media representations of, and vitriol against, vegans. Indeed, just as the Towards a Vegan Theory conference centred around a confrontation with failure, inconsistency and inarticulable emotions in relation to nonhuman animals, the figure of Shelley’s monstrous vegan, as an embodiment of anxieties around the human, humanity and humanism, suggests the importance of such confrontations for critical evaluations of the novel. For example, the creature’s repeated association with cannibalism throughout the novel, defined as a “savage” (26) by Walton whilst the young William accuses “you wish to eat me” (144), ties him to contemporaneous fears of cannibalism within the colonies whilst presenting characters with both the animated remains of slaughtered animals and the contingency of the boundaries of the edible.

At the upcoming BARS conference I will be providing a close analysis of Frankenstein to explore the ways in which the creature invokes anxiety in the novel as well as his relation to sympathy and the body. By presenting a monstrous creation whose veganism appears as both an articulable difference, where his diet is defined as “not that of man” (148), and an inarticulable relation to the body, seemingly innately drawn to a herbivorous diet, Shelley’s novel raises questions of whether veganism is to be seen as a humanist mode of self-discipline, or an ethical response outside of the prosthetics of language. As Laura Wright tentatively suggests in The Vegan Studies Project, veganism might perhaps be best viewed as much as an orientation as a social choice; “a delicate mixture of something both primal and social, a category — like sexual orientation or left- or right-handedness — that constitutes for some people, just perhaps, something somewhat beyond one’s choosing” (7).

You can find out more about the Centre’s interest in health and wellbeing at the website for our Wellcome Trust-funded project ‘Living with Feeling’.