This guest post by Kristine Lillestøl is part of Gut Feelings Week, in which a group of scholars participating in the conference Gut Feeling: Digestive Health in Nineteenth-Century Culture explore different aspects of digestion.

Kristine Lillestøl has a background as a medical doctor. She has a PhD in medicine, on a project about psychological and immunological factors in irritable bowel syndrome. Her current project is about the history of neurasthenia, mainly in the Norwegian context, and she currently holds a position as a postdoctoral fellow at the Department of Community Medicine and Global Health, at the University of Oslo. She receives funding from the SAMKUL programme of the Norwegian Research Council.

Neurasthenia, literally meaning “want of strength in the nerves”, was a widely used diagnostic label during the decades around 1900. As the name suggests, the condition was perceived as some kind of “weakness” of the nervous system, but the exact disease mechanisms were unknown.

The popularization of neurasthenia was initialized by the American physician George Miller Beard (1839-1883). In his classic work A Practical Treatise on Nervous Exhaustion (1880), Beard described a wide variety of possible symptoms of neurasthenia, including headache, widespread pain, insomnia, drowsiness, mental irritability, inability to concentrate, morbid fears, and hopelessness, to mention but a few.

Beard also presented several suggestions when it came to possible causes of the “lack of nervous force” in neurasthenia, and he became particularly famous for his portrayal of neurasthenia as a product of the rapid societal changes and hectic American modern life at the end of the nineteenth century (See George M. Beard, American Nervousness: Its Causes and Consequences, 1881). Other authors emphasized other causal explanations, such as the French professors of medicine Gilbert Ballet and Adrien Proust, who warned against “over-pressure” on the brain, including “moral over-pressure”:

The depressing emotions, that is to say, vexation, anxiety, disillusions, remorse, thwarted affection, in a word all states of sorrow and disquiet – these are the usual causes of nervous exhaustion. (The Treatment of Neurasthenia, 1903)

The history of neurasthenia has been widely studied during the last three decades, but few scholars have focused on the gastrointestinal aspects of this history. The digestive apparatus was, however, a site of special interest to many physicians during the heyday of the diagnosis, in Europe as well as in America.

Symptoms relating to the gut, such as constipation, heartburn, belching, abdominal pain, nausea, and loss of appetite, were generally considered to be very common features of neurasthenia. Some authors even argued that it would be useful to single out patients with predominantly gastrointestinal symptoms as a distinct subgroup that should be labelled “neurasthenia gastrica” or “digestive neurasthenia”. The gut was also perceived as important when it came to the pathophysiology of neurasthenia, and the various understandings of the possible interplay between the gut and the “nerves” in this condition became hot topics for debate in the medical literature.

One frequently recurrent question in these debates, was that of the possible role of so-called “gastroptosis”. Many physicians had observed an association between neurasthenia and what they perceived to be an abnormal “sagging” of the stomach. In some cases, this sagging also involved the intestines and even other organs of the abdominal cavity, and was then referred to as “enteroptosis” or “visceroptosis”, respectively. This downward displacement of the stomach and intestines was frequently assumed to be associated with a loss of tone (“atony”) of the respective organs, and consequently with slow emptying of the stomach, reduced intestinal motility, and “stagnation” of the intestinal contents. This stagnation was in turn assumed to increase the risk for “intestinal autointoxication”, where the absorption of toxic products from an abnormal fermentation process in the bowel could cause systemic disease, including a wide range of neurasthenic symptoms. 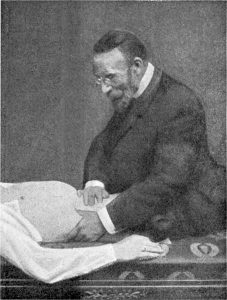 Although it seems to have been widely accepted among medical authors that there had to be some kind of close interaction between the “nerves” and the gut in neurasthenia, there was considerable debate about the nature and direction of these interactions. Of course, not everyone agreed that neurasthenia could be understood primarily as a disorder of the gut. In the case of gastroptosis, for instance, there was disagreement as to whether this should be interpreted as the primary cause or a secondary effect of the general weakness of the nervous system in neurasthenia. Differing views in this respect could lead to quite different therapeutic recommendations. If the gut-related signs and symptoms were perceived as a consequence of neurasthenia, the treatment was directed towards the general condition, for instance by means of rest cures, hydrotherapy or electrotherapy. On the other hand, if a sagging stomach or a toxic bowel was perceived as the primary cause of neurasthenia, this could prompt more radical and invasive treatments, such as surgery.

In 1903, Ballet and Proust concluded that none of the available pathogenic theories of neurasthenia at the time were altogether satisfactory. Many would agree with them. Nevertheless, the gastrointestinal history of neurasthenia is an intriguing one, which also serves as an important precedent for our current debates on brain-gut interactions in health and disease.